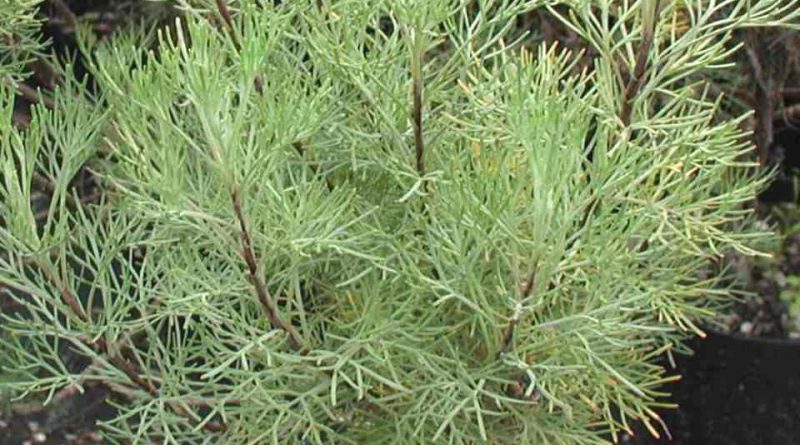 Southernwood (Artemisia abrotanum L., 1753) is a herbaceous species belonging to the Asteraceae family.

Etymology –
The term Artemisia comes from Ἄρτεμις Artemis Artemide, Greek name of the goddess Diana, a genus already mentioned in Pliny; according to some authors, Artemisia II of Caria (Αρτεμισία Artemisía? -350 BC), sister and wife of Mausolus, would have given this plant its name.
The specific epithet abrotanum, comes from abrotonum, a medicinal plant mentioned by Horace and other Latin authors.

Geographical Distribution and Habitat –
Southernwood is a plant of probable Iranian-Turanic origin. It is present as an adventitia in many regions of northern and central Italy and in Puglia, but apparently in decline since it has not been recently reported in several regions.
Outside Italy, its distribution sees it in the Alps beyond the Italian borders, as in some areas such as France (departments of Hautes-Alpes and Isère), or in Switzerland (cantons of Valais and Ticino) or in Austria (Länder of Carinthia) . On other European reliefs it is found in the Carpathian mountains.
It is also present in Asia, in temperate areas, such as: Turkey, Armenia and the Caucasus. It is also present in North America.
Its habitat is that of the uncultivated and along the roads, in rather disturbed environments, below the mountain belt, preferably on both limestone and siliceous substrates with soil with neutral, dry pH, medium nutritional values.
The altitude distribution is up to 800 m a.s.l.
The species is frequently cultivated also for ornamental purposes. 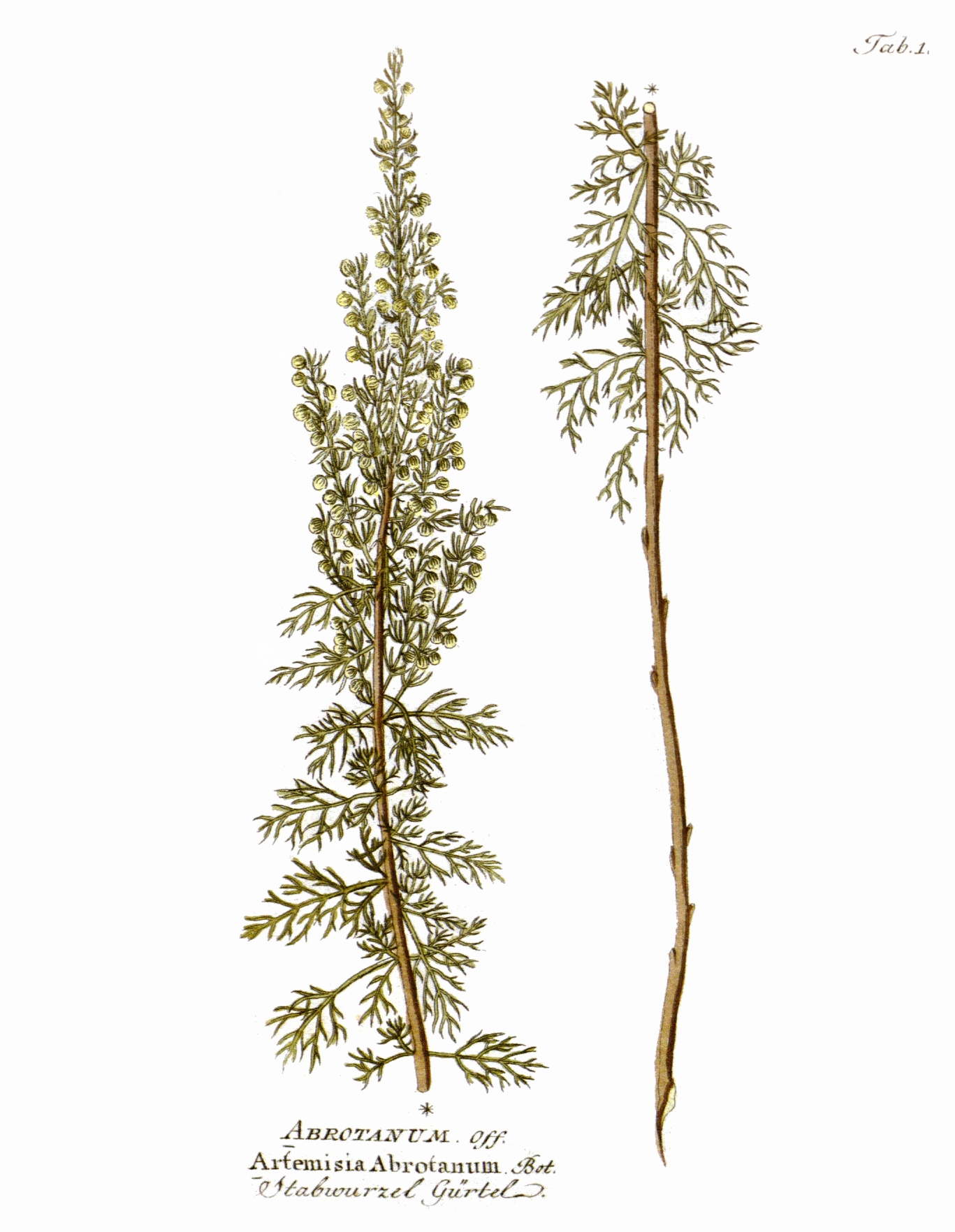 Description –
Southernwood is a herbaceous plant whose height can reach 50 – 100 cm, and even more in some environments.
It is a plant with a woody consistency at the base with wintering buds placed at a height between 2 and 30 cm from the ground with a shrubby appearance. The stems are woody brown in color and very branched but hairless; even the main branches can be woody.
The herbaceous part dries annually while the woody parts remain alive and reject the following year.
The roots are thick, secondary from taproot.
The leaves are cauline with a largely ovate lamina, it is large and several times divided (2 – 3 multifida) in several strictly linear segments (lacinias) of dark green color (with ash-gray shades) and pubescent in the lower part.
The leaves that are close to the inflorescence are simpler and are arranged alternately and without basal stipules and orecchiette, with the width of the lacinias: 0.4 – 2 mm and lamina size: 3 – 5 cm.
On the leaves there are point glands.
The flowers are actinomorphic, tetra-cyclic (with 4 verticils: calyx – corolla – androceo – gynaeceum) and pentamers (calyx and corolla formed by 5 elements).
These are gathered in terminal panicle inflorescences and is formed by small subspherical and subsessile, whitish and pendulous flower heads composed only of tubular flowers.
The structure of the flower heads sees the presence of several hawksbill bracts (oblong-elliptical in shape) arranged in different orders that protect the hairless receptacle (without straws) on which two types of flowers are inserted: the external ligulate flowers (absent in this species), and the central tubular flowers.
The latter, in particular the peripheral ones, are female (up to 15 flowers), while the central ones are hermaphrodite (up to 20 flowers) and all fertile.
The cob has a width of 10 – 20 cm and a length of 10 – 30 cm.
The flower heads have a diameter of 2 – 5 mm, with the casing size of 2 – 2.5 mm wide and 2 – 3.5 mm long.
The antesis is between July and October.
The fruits are light brown achenes without pappus and glabrous, with an ellipsoid-compressed shape and a size of 0.5 – 1 mm.

Cultivation –
Artemisia abrotanum is a species that grows mainly in the spontaneous state with pollination especially of the anemophilous type which guarantees reproduction by pollinating the flowers.
This plant is cultivated quite easily in arid and sunny soils, on clayey-calcareous substrate, but with the presence of a good supply of organic substance.
These are plants which, in addition to pollination, in their natural state, are easily propagated by cuttings or by division of the roots.
The cultivation of the plant occurs mainly in gardening to populate otherwise difficult spaces.

Uses and Traditions –
Southernwood is a herbaceous plant that gives off a strong aromatic smell typical and similar to that of cedar (or lemongrass), slightly camphorated which for some resembles that of vermouth.
Abruzzo was already known and cultivated in gardens by both the Romans and the Greeks.
In ancient times it was often used in the herbal field for its antiseptic and antitarmic properties and in the kitchen for its strong and somewhat pungent aroma.
A popular superstition tells that this plant was able to protect houses from witches and evil spirits, against which it was in fact spread on the floors or hung on the threshold of the houses. It was also said in those days that, placed under the pillow, it had the miraculous power to arouse the love desire.
Medieval monks believed that its seed had a beneficial effect on the nerves and that it helped in cases of mood instability, if administered through the decoction method; moreover, the raw plant, added to the wine, seems to cure sciatica and cause menstruation.
Among the applications of ancient herbalists there was also that of using this plant to flee snakes and to neutralize their poison.
The parts of the plant boiled with bread crumbs and quinces in water constituted an ointment to be applied against the burning in the eyes, while the plant, combined with the fat, was used to bring out splinters and thorns stuck in the skin.
In ancient times it was also used to treat liver, spleen and stomach problems and the seventeenth-century herbalist Nicholas Culpeper believed that it promoted menstruation.
Today it is rarely used in medicine, except in Germany, where it is used as a poultice on wounds and skin conditions and occasionally to treat freezing, or elsewhere in herbal medicine for the treatment of various ailments including malarial fever.
A yellow dye can be extracted from the leaves of Artemisia abrotanum; these plants are latex-free, but contain sesquiterpene lactone ethereal oils. In addition, the leaves also have insecticidal properties and that contain a volatile oil responsible for the strong scent that justifies their use, in small doses, as a flavoring.
Like other congenital species, the species in fact contains Tujone.
Due to its characteristics, this plant has various medicinal properties: it is in fact antibacterial, stimulating and diuretic; the infusion of dry leaves (in the amount of about 1 tablespoon for each cup of boiling water) constitutes for example a very effective general tonic, which helps to overcome the flu, alleviating the joint pains characteristic of this disease; it is also used in various cases, to eliminate intestinal worms, to relieve menstrual pain and as a stimulant of brain activity.
Abrotano, like absinthe, has the virtue, as mentioned, of removing insects and its dried leaves can be easily used for the creation of original anti-moth bags to be placed between clothes.

Method of Preparation –
Artemisia abrotanum is used in small quantities, through the slightly spicy leaves, to flavor herbal liqueurs, herbal teas, candies, chicken fillings, grilled meats (however, the taste is very bitter).
From the young shoots you can make a bitter tea.
You can also prepare herbal teas that, like for tea, have a rather bitter aroma, so it is advisable to sweeten the herbal tea obtained with a spoonful of honey. This multi-use plant is also a very important ingredient in the preparation of a hair lotion that can combat baldness.