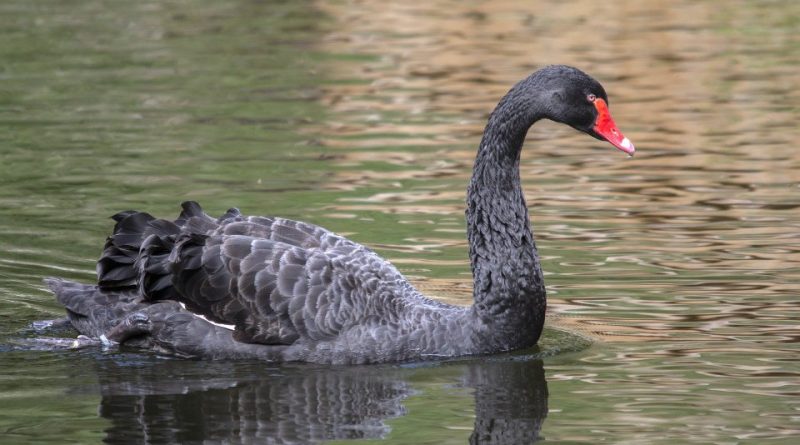 The black swan (Cygnus atratus Latham, 1790) is a large bird belonging to the Anatidae family.

Geographical Distribution and Habitat –
The black swan is a bird native to Australia where it nests in large colonies but today it is also widespread in some areas of Europe and America.
In Italy it is occasional, descendant of imported specimens that have fled or been released from captivity.
Its habitat is that of areas rich in water and aquatic vegetation. 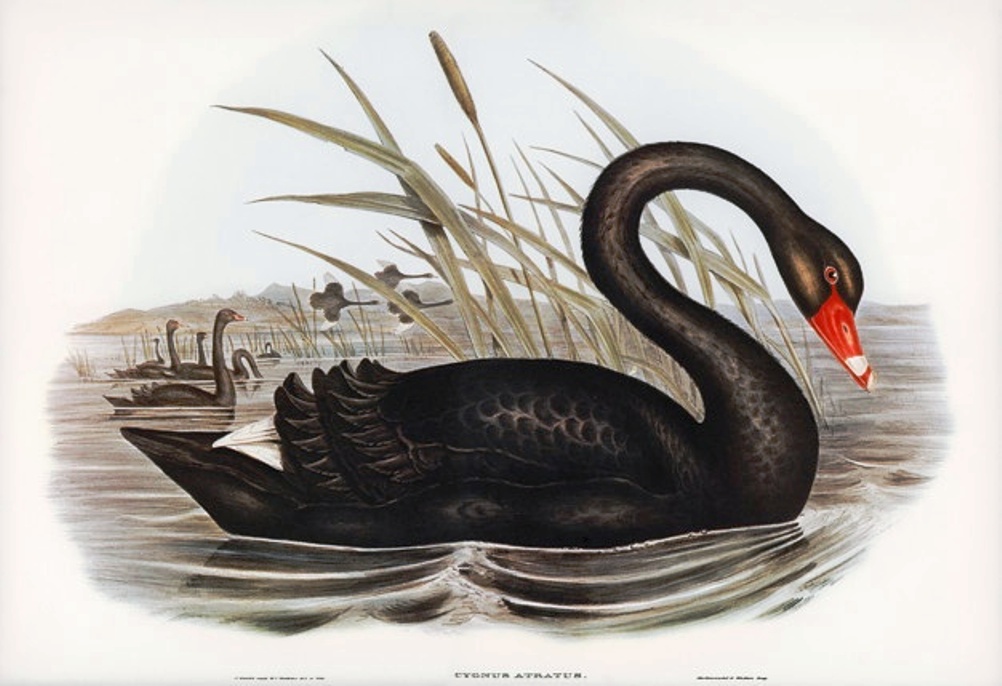 Description –
Cygnus atratus is a large bird, with a length up to 140 cm and a wingspan between 160 and 200 cm with male and female practically almost indistinguishable.
It is recognized for the unmistakable dark, almost black plumage on the whole body except for the remiges, which are white, and the red beak crossed by a white strip near the end on the opposite side of the attachment to the head.
This bird has a smaller head and a longer neck than other swan species.
The legs are dark gray.
Young swans have dark gray plumage up to three years (reaching reproductive age).

Biology –
The black swan is closely related to the mute swan, of which it is symbolically identified as the specular negative.
This species forms pairs that remain fixed forever and builds and makes the nest hidden by vegetation near the water, usually reeds with straw and dried herbs, which the female internally covers with feathers that tear from the belly.
Within this nest 5 to 8 eggs are laid, which have a whitish shell, and which are hatched by both parents on average between 36 and 40 days.
The chicks, with grayish duvet and dark beak, are already self-sufficient at the time of hatching, but follow and are protected by their parents. In the reproductive period the male is very jealous and aggressive. In the remainder of the year, the black swan coexists peacefully with other Anatidae species, even smaller than its own. In the period of the moult, which lasts a few days, it is unable to fly.

Ecological role –
The black swan was known throughout the western world only after 1697, the year in which it was discovered on the Australian continent by Willem de Vlamingh.
It is a bird of sedentary customs that often migrates depending on the climate, escaping the periods of greatest drought.
He is an excellent flyer even if the take-off is a bit laborious.
Like other swans, it is herbivorous, basically feeding on plants that it picks up both in the seabed through the immersion of the long neck, both on the surface of the water, both from protruding branches and on the mainland, and accidentally omnivorous, ingesting tiny forms of animals mixed with algae and aquatic herbs.
As far as its relations with the human species are concerned, Swans are wild animals capable of living autonomously compared to humans unless they are limited / conditioned differently (cutting wings, separating from parents before complete maturity, captive breeding, bonds affective, etc.) or are forced to suffer the destructive alteration of the habitat caused by activities or artifacts, such as: infrastructure in waterways, drying up of basins, aerial electrical structures, fishing (swans are affected by hooks, lines, accidental ingestion of sinkers), etc.
Furthermore, the habit of throwing food to swans to establish a contact useful for socializing with them, should take into account – besides the fact that being wild animals every contact with man is potentially harmful to them (since it risks reducing their substantial independence ) – that bread, especially if dry or in large bites, is far from their ideal food; indispensable in this regard that it is at least supplied in small bites and always pre-softened / soaked with water (possibly throwing it in the water near the place where the swan swims – if water is not very moved and clean), in overall moderate quantities (there is risk that the swan makes it indigestion, causes too many generous gifts by admirers and tourists), and never impose it as the animal’s exclusive food.
Cygnus atratus is present in numerous symbols of the states and territories of Australia.
Thanks to the beautiful appearance it is easy to see it in zoos all over the world. It adapts very well to captivity and is also a good breeder.
In Australia the black swan has long been persecuted by the Aborigines, who considered him – for his gloomy plumage – an ally of the devil. It is affected by hunting and the destruction of its natural environment. Today the species is protected and frequently bred in zoos and parks.