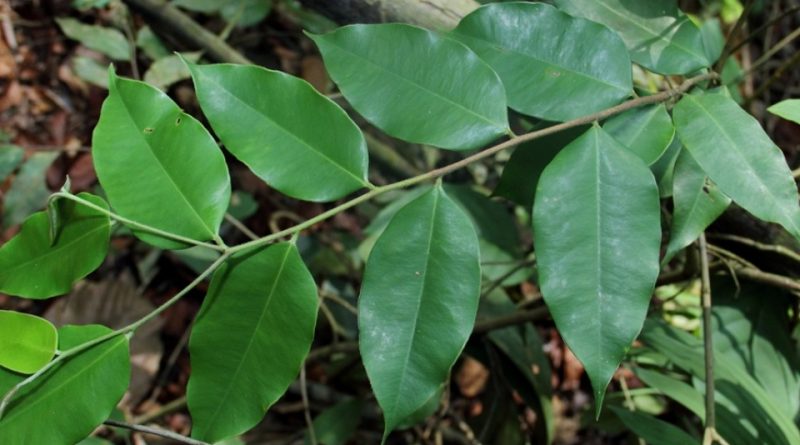 Agarwood (Aquilaria agallocha Roxb.) Is an arboreal species belonging to the Thymelaeaceae family.

Systematic –
From a systematic point of view it belongs to the Eukaryota Domain, Plantae Kingdom, Magnoliophyta Division, Magnoliopsida Class, Rosidae Subclass, Myrtales Order, Thymelaeaceae Family and therefore to the Genus Aquilaria and to the A. agallocha Species.
The term is synonymous
– Aquilaria malaccensis Lamk ..

Etymology –
The term Aquilaria comes from a voice of the East Indies, aghil, combined with the Latin eagle.
The specific epithet agallocha is a term originating from the idiom of local populations.

Geographical Distribution and Habitat –
The Aquilaria agallocha is a plant native to the area of ​​central south Asia, corresponding with northern India and in particular with the hills of Assam, Meghalaya Nagaland, Manipur, Tripura, as well as in Myanmar (Burma), Malaysia, Indonesia and the Philippines.
Its habitat is usually that of the primary forest and in the more open secondary formations, mainly in the presence of rivers and streams and on ridges with sandy soils in lowland areas but also on slopes and ridges up to 750 meters above sea level. 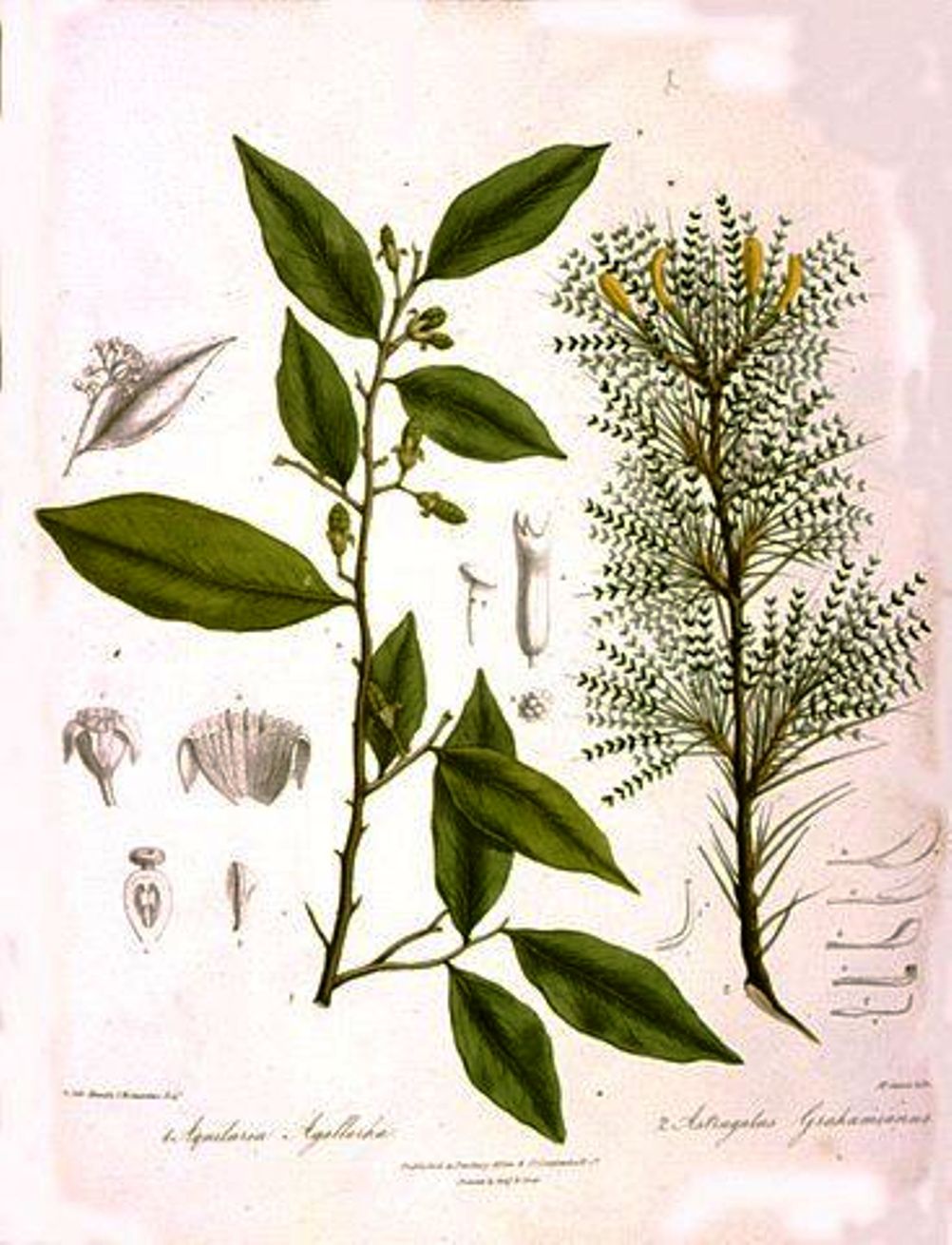 Description –
Aquilaria agallocha is a tropical tree that grows quite slowly and reaches heights of over 25 meters, being able to reach almost 50 meters in height, and with a trunk diameter of about 70 cm.
The wood is characterized by a brownish-gray color.
The leaves are ovoid, of an intense green color and arranged alternately along the branches.
The flowers are small, with whitish petals, collected in small inflorescences.
The fruits are pyriform in shape with a greenish exocarp.
Flowering and fruiting can begin at the age of 7 – 9 years.

Cultivation –
Agarwood is a plant that grows best in soils in the humid tropical climates of the plains, at altitudes between 200 and 700 meters.
It prefers an annual rainfall of 1,500 – 6,500 mm, with an average annual maximum temperature of 22 – 28 ° C and an average annual minimum temperature of 14 – 21 ° C.
It prefers heavy soils originated from gneiss and other metamorphic rocks, but also grows well on sandstone clays.
For propagation the seeds must be sown immediately, since they remain viable only for about a month. The seeds immediately after harvest have about 65% germination, falling to 45% after 1 week and only 5% after 3 weeks of storage.
The sowing must be done in the nursery at about 5 mm deep in a mixture of earth, sand and manure and kept in the shade.
Germination begins after 10-12 days and is normally complete after 1 month.
Remember that young seedlings are very prone to attack by insects and should be planted in containers 40 – 45 days after germination when they are 3 – 5 cm tall and kept in the shade.
The plants are ready for transplanting when they are 30 – 35 cm high, which corresponds roughly to an age of 10 – 12 months.
Transplanting bare root seedlings has been attempted successfully in some areas.
Fruits collected for seeds should be harvested when ripe but still green. A medium-sized tree produces around 2,000 seeds per year, but seed production can vary widely over the years.
The fruits are dried in the shade for about 2 days, then burst and release the seed.

Uses and Traditions –
Agarwood wood oil is an essential oil obtained by steam distillation of wood.
It is used in luxury perfumery for application to oriental essences.
It produces interesting olfactory notes with clove oil and is so rare and expensive that it is produced only on request.
Agarwood wood oil is a viscous liquid varying in color from yellow to dark amber, with a characteristic balsamic and woody smell. Its aroma has a certain resemblance to vetiverolo or styrax and has a sweetness similar to that of sandalwood oil. Its odor is long lasting and has good toughness for various uses.
The internal bark, silver in color, can be removed from the trunk in a single large sheet and is highly appreciated for its consistency and durability, as well as being used for rope fabrics.
It is also transformed into writing material which in the past was used only for chronicles of important events and religious books.
Scented wood differs from normal wood mainly due to the deposition of an aromatic resin. The resin is concentrated in the phloem filaments. Due to the resin content, the scented wood is relatively hard, brittle and heavy.
The aromatic resin obtained from this tree is one of the most famous and expensive on the planet. It has a very long history of use in religious ceremonies, funerals etc. In the East it is widely sought as an ingredient in perfumery.
The high cost of this resin, with an intense and precious fragrance, is due to the fact that to obtain it, the tree must be infected with a certain type of mold (Phialophora parasitica).
The trees that become infected react with the production of the resin. Furthermore, not all Aquilaria trees are infected with that mold and not all infected trees produce resin.
This plant, commonly harvested in nature, in recent times, due to its exploitation, is trying to grow it in specialized plantations.
In fact, this tree has been heavily exploited in nature, causing serious concerns about its extinction, so much so that it is listed as vulnerable in the IUCN Red List (2009) and is considered endangered in India.
For this reason, research into the possibilities of artificial induction of the fungus and the stimulation of the formation of agar wood is therefore important and can offer high economic returns, above all because the evidence indicates that the management of plantations does not present great difficulties.
Agarwood, with these characteristics and distilled, produces an essential oil, known as agar oil. This has astringent, carminative, antidiarrheal, antidissenteric properties and is used in gout, rheumatism and paralysis; as a stimulant for those who have sexual problems, and as a liniment in skin diseases.
The essential oil produces numerous agarofurans, sesquiterpene alcohols and spirosesquiterpene alcohols.
On a medicinal level, agarwood is relieves spasms, especially of the digestive and respiratory systems, and lowers fevers.
In western, Chinese and Indian medicines, frankincense is used against cancer, especially of the thyroid gland. In China it is applied as a sedative against abdominal discomfort, asthma, colic and diarrhea and as an aphrodisiac and carminative.
Grated wood enters various preparations used especially during and after childbirth and for the treatment of rheumatism, smallpox and abdominal pain. Wood decoctions are said to have antimicrobial properties, e.g. Against Mycobacterium tuberculosis and Shigella flexneri.
The fragrance produced from agarwood has been highly valued for thousands of years and its use as incense for ceremonial purposes in Buddhism, Confucianism and Hinduism is widespread throughout Eastern and Southern Asia. In Thailand it is put at funerals, while in Japan incense is used in tea ceremonies.
The wood only partially saturated with resin but still fragrant, and occasionally also the wood left after distillation, is transformed into sticks called “incense sticks” or “agarbattis” which are burned as incense.
Incense is also used as an insect repellent.
As for other uses.
The resin is used to flavor curries in Malaysia.

Method of Preparation –
The preparation of the agarwood wood resin follows a distillation process and from this a very used oil is obtained, as mentioned, for a series of applications both in the pharmaceutical sector, in cosmetics but also as insect repellent or other parasites.