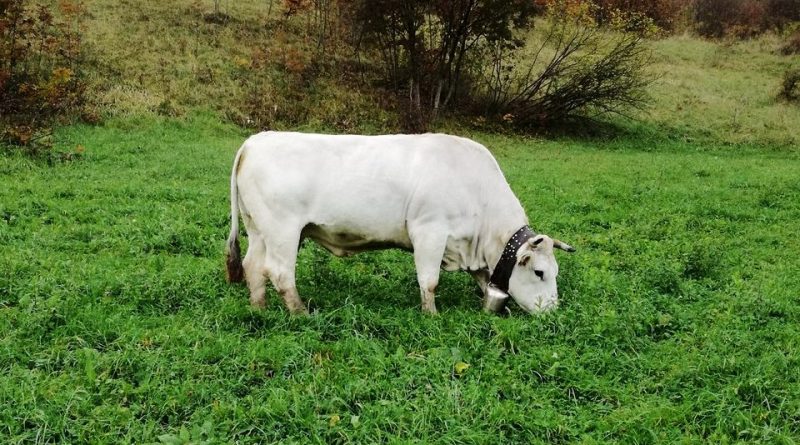 The Marchigiana is a native bovine breed (Bos taurus Linnaeus, 1758) of Italy, bred in the Marche and neighboring regions with an aptitude for meat production.

Geographical and Area Distribution –
The Marchigiana is a bovine breed originating in the Marche region, bred mainly in the Marche and neighboring regions, such as Abruzzo, Molise, Lazio and Campania, mainly grazing. Today it is the third Italian beef breed.
The number of herds has shown a slight but steady decline in the last 10 years, passing from 2,784 herds in 2006, to 2,129 in 2016. In the same period the number of animals has slightly increased, going from 50,077 animals to the current 51,078 animals (Source ANABIC ). This means that the very small farms have gradually disappeared to make way for slightly more structured and professional companies. The fact remains that the spraying of the Marchigiana herds is characteristic for this breed, which still today has an average stable of 24 animals and an almost exclusively closed cycle breeding system.

Origins and History –
The Marchigiana is a bovine breed that was once used only for work and that derives from crosses of cattle of the Podolico strain not improved, with subjects of Chianina and Romagnola breed, deriving from cattle of Asian origin, which arrived in Italy in the fourth century AD , with the barbarian invasions. It was born as a working breed and so it is used in the countryside until the post-war period. To improve it, it was crossed with the Chianina breed and then with the Romagnola breed, until in 1928, any form of cross was suspended to fix its characters and the selection started which gave rise to the current Marchigiana.
A careful selection began in 1932 which led to the formation of the current Marchigiana breed.
It is the third beef breed in Italy, after the Fassona and the Chianina, and it is the one with the best morphological structure of the whole podolic strain.
The Marchigiana was recognized as an ethnic entity only in a relatively recent period and originates, as mentioned, from Marchigiani cattle of Podolian stock not improved with Chianina breed subjects and, subsequently, from the union of Chianine-Marchigiane half-breed cattle with bulls of the breed Romagna.
The Marchigiana is one of the 5 Italian white breeds, together with the Podolica, Maremmana, Chianina and Romagnola. With the latter two, it has had the IGP recognition for beef in Italy (the only 3 in Italy) with the denomination “Vitellone Bianco dell’Appennino Centrale”.
This breed is under the control of the National Association of Italian Cattle Breeders A.N.A.B.I.C., which has been managing the genealogical books of the Italian white breeds (Chianina, Romagnola, Marchigiana, Maremmana, Podolica) since 1966.

Morphology –
The Marchigiana breed is recognized for having an almost white gray coat in both sexes, with the presence of gray hair in males in the front train and around the eyes.
The coat is characterized by a short, white and smooth coat, with gray shades on the shoulders, forearm and eyes.
The coloring is gradually taken on so much that the calves from birth to 4-6 months are fromentino color.
The mucous membranes and the skin are black pigmented.
It has medium-short and coarse and black horns at the tip.
These are rather large cattle, at 14-16 months it can reach 600-700 kg in weight, with slaughter yields of 60-65%; calves are born, on average, on 50-55 kg.
It also has very strong limbs and claws, excellent for work attitudes.
Of the Chianina breed progenitors, the characteristic white coat (tending to gray), short neck in the bulls and horns curved forward is evident. Of the Romagnola breed progenitors, on the other hand, it has little excessive bulk at the withers, fairly short and robust limbs, broad forehead, almost cylindrical trunk, broad rump, very developed abdomen and rounded thorax.

Productive attitude –
The Marchigiana is a bovine breed with good conformation for the production of meat. It is a smaller breed than the Chianina but with similar weights, as it has shorter limbs but a greater development of the muscle masses.
The meat is of excellent quality, with the right marbling and tenderness and with just or scarce milk production for the calf.
The meat obtained from the Marchigiana is tender, with an excellent flavor, high protein content and low cholesterol levels. It is very lean and compared to other meats on the market it contains a lower percentage of saturated fatty acids, such as myristic and palmitic acid, and a greater quantity of monounsaturated fatty acids (oleic acid). Also polyunsaturated fatty acids (linoleic and linolenic acid) are present in greater quantities in the Marchigiana breed meat than other meats on the market. As regards the content of “bioactive” molecules, the Marchigiana meat is rich in histidine dipeptides (anserine and carnosine).
It is a breed that was once dual-purpose (meat and work), is now bred only for meat.
Furthermore, thanks to its ancestors of Asian origins, it has excellent adaptability to grazing in various conditions because it is an excellent user of fodder and resistant to diseases.
It has remarkable fertility, excellent earliness and good slaughtering performance. Due to its rusticity, it is particularly suitable for grazing in hilly and mountainous areas.