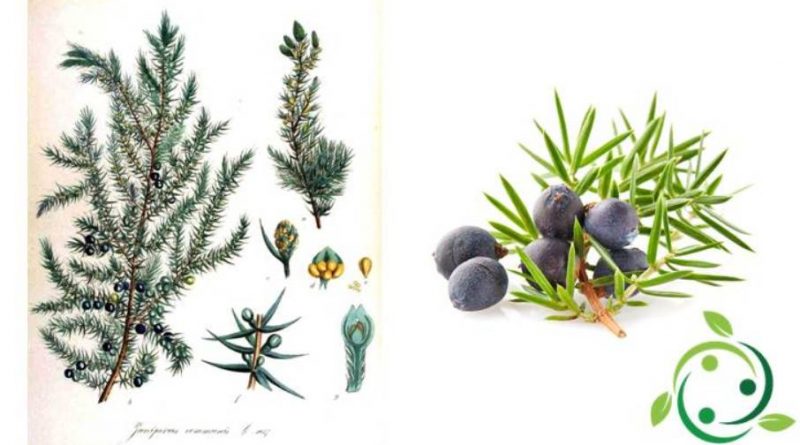 Juniper is a spice obtained from the “berries” of the common Juniper (Juniperus communis L.) which is a species that occurs in a shrubby or arboreal form.

Origins and History –
Juniper is a plant of ancient use so much so that we already find it among the Romans, and Apicius lists it among the essential spices for a cook as it was also considered a popular substitute for pepper.
During the Middle Ages, its twigs had a great use and appreciation, some authors underline what it was: “odoriferous and good for skewered meat, because it leaves its flavor inside”.
From this period, juniper has become part of many recipes dedicated to game, and its wood has been used in cooking on the spit or on the grill because it gave the meat a pleasant resinous aroma.
In popular beliefs, juniper was recommended, for its pungent leaves, as a remedy for witches, and both the stick to turn the polenta, and a branch hung above the door of the house or stable, had to be made of this plant.
Furthermore, with the juniper branches, which have tonic, digestive, stimulating, diuretic and sweat properties, the fire was fed when there was a patient in the house, distributing its freshly picked leaves on incandescent plates of the fireplace, so that the its aromatic and medicinal scents flooded the room.
The famous abbot Kneipp even suggested wrapping the sick person in a blanket that had to be heated to the steam of a pot in which boiled juniper branches and berries. This suggestion has gone down in the history of popular herbal medicine with the name of Dr. Kneipp’s cloak.
As a condiment and flavoring, juniper is now highly appreciated in gastronomy: its pampering (the so-called berries) are used in marinades, fillings, soups, jams. Furthermore, its marked aromatic characteristics make it indispensable in liquor products, just think of gin and grappa.

Description –
The common juniper is a conifer that grows in the form of an evergreen shrub or sapling with a twisted trunk, 1 to 10 m high, with linear-needle-like, pungent leaves, gathered in verticils of 3.
It is a dioecious plant, with male and female flowers on different plants and with the latter producing berries, also called “pampering” which ripen in the autumn following pollination and are enclosed in a brownish colored cone called a galbulo; scaly and pruinose, it is composed of 4 fleshy scales welded together containing from 1 to 3 angular seeds rich in an aromatic essential oil.
Because of their appearance, the cones are easily mistaken for berries and therefore commonly called “juniper berries”. They are widely appreciated for their aromatic qualities.

Properties and Uses –
Juniper is a plant common in Italy both in the Alps and in the Apennines up to Lazio and Sardinia.
This plant is at the center of a fairy tale by the Grimm brothers and of various popular stories and beliefs, moreover it would have been the only one (according to a medieval legend) to shelter the Holy Family during the flight to Egypt and for this the juniper was blessed by the Virgin.
Popular tradition has always attributed to juniper the power to keep away witches and evil spirits, for this reason its branches were hung on the doors of the stables to preserve the health of the cattle, they were placed on the roof of the newly built houses and the Greeks and Romans burned them as if they were incense to purify the air.
Juniper, however, has always been considered by folk medicine a natural remedy for the treatment of various ailments but also in the kitchen; at the time of the Romans Apicius indicated it as an indispensable spice in the kitchen of a cook and an excellent substitute for pepper; in the 19th century, as mentioned, the German abbot Sebastian Kneipp suggested that people suffering from flu should wrap themselves in a steam-heated blanket in a pot in which berries and juniper branches were boiled.
Juniper has numerous virtues: it is stomachic and chewing its berries facilitates digestion, it is a natural antiseptic for the urinary and respiratory tracts (useful for the treatment of urinary stones, to sedate the cough or as an expectorant) and has anti-rheumatic properties, often in fact Juniper essential oil is used for massages. Massaging the body with juniper oil helps relax contracted muscles, prevents cramps and tones up connective tissues.
Juniper berries have a flavor and taste, both sweet and aromatic and acidulous, which is why they dampen strong foods such as game and sauerkraut.
They are also highly appreciated for flavoring baked potato or fish preparations.
Much used in the preparation of spirits by fermenting the juice of the berries and then distilling (juniper and juniper brandy) and for making liqueurs by distilling the spirit on the berries (gin).
In addition, the juniper wood is very fragrant, which is why it is used to smoke cured meats (this is the case with the renowned Trentino speck) and placed in wood-burning ovens to give aroma to the bread during cooking. Juniper curiosityThe name juniper derives from the Celtic word juneprus which means “acrid”.
Juniper wood was used to build kitchen utensils, so as to inebriate all the dishes that were prepared with its sweet aroma, an example was the ladle to turn the polenta.
Some juniper shrubs (Juniperus rigida and Juniperus chinensis) are used in Bonsai art in Japan because they allow to obtain very original and daring shapes.
As far as the saying “being in a juniper” is concerned, it refers to the intricate branches of the juniper and its prickly leaves to metaphorically indicate a difficult and problematic situation.
Juniper essential oil is an oily liquid obtained by distillation from chopped berries. Furthermore, through the processing with water and vacuum concentration of the residues, it is also possible to obtain juniper extracts.
The yield in the distillation of essential oil is quite heterogeneous among the various qualities of juniper. The Italian one (especially from the Apennine ridge) is considered among the most superfine and contains up to 1.5% (more often 1%) of essential oil. The Bosnian and French varieties seem more profitable, with 2%, while the Germanic (less profitable) variety is probably the most valuable.
Juniper essence is a faded green liquid, tending to be unstable, which sours / turns rancid very quickly. The smell vaguely resembles turpentine, while the taste is balsamic, spicy and bitter.
Juniper essential oil was born for aromatic use in the liquor store. Today, a certain officinal function is also known. For internal medicine, essential oil demonstrates good diuretic, stomatic and carminative properties. For topical use, however, it mainly works for its revulsive qualities. It is used internally as a stomachic, diuretic and anthelmintic; externally as a disinfectant and revulsive. Juniper essential oil also has a wide use in the gastronomic flavoring of sauces, meats and aromatic vinegars.
As regards the properties of the substances contained in the berries and in the juniper essential oil, terpinen-4-ol and other diterpenes of the oil stimulate the secreting renal epithelium, giving it volumetric diuretic properties. In addition, in case of low urinary tract infection, they act as bacteriostats towards staphylococcus aureus, streptococcus pyogenic, Escherichia coli and Salmonella typhi.
The other series of active ingredients consisting of Flavonoids: tannins, juniperosides, apigenin, rutin, hypolaetin-7-pentoside, gossipetine-glucopentoside and quercitrine confer to this plant antioxidant, hypoglycemic and eupeptic properties, which justify its popular use. in case of diabetes and intestinal colic. In the tincture used externally, these compounds confer anti-inflammatory power in case of neuralgia or rheumatic pain.
Finally the pinene, it has been seen that in vitro inhibits the synthesis of some inflammatory cytokines at the level of human cartilage cells or chondrocytes.
However, please note that juniper preparations should not be used in the case of: inflammation of the upper urinary tract, pregnancy and breastfeeding and severe renal failure.

Preparations –
Juniper berries can be bought on the market fresh and then dried, or even dried in supermarkets or in shops specializing in the sale of spices.
Juniper berries must be kept in places protected from light and well ventilated, in the absence of humidity. If not stored in an optimal way or for too long, it can give rise to intense fermentation phenomena, which give the product a typical unpleasant smell of “marc”.
They can be dried naturally in a ventilated and dry place in a single layer, to avoid mold, or they can be put in the oven at a low temperature.
Juniper berries are usually crushed before use, but they can also be used whole in the preparation of a broth.
In the kitchen, juniper berries are generally used in the preparation of meat dishes such as game. It goes well with chestnut and fruit based fillings and vegetables from the cabbage family. Being a rather strong spice it is advisable to use no more than 6-7 berries at a time. They are also used to smoke cured meats and especially ham.
In Trentino Alto Adige, its use is particularly appreciated not only to give flavor to potatoes and sauerkraut, but also to smoke some of the typical products of the region such as speck, carne fumada and Mortandela.
Juniper is also used in cooking fish in foil.
You can prepare a particular Gin, which is a strong, colorless distillate, produced by the distillation of a fermented obtained from wheat and barley in which a mixture of herbs, spices, plants and roots is macerated, including the berries of juniper that characterize its aroma and taste and the name itself.
As regards therapeutic uses, infusions can also be prepared.
To prepare a juniper infusion, leave the juniper berries (15 g) crushed in 1 liter of boiling water for 5 minutes. Drinking 2 cups a day of this infusion promotes diuresis, calms the cough and purifies the urinary tract.
By leaving to macerate for 10 weeks 10 g of mashed berries in 1 liter of white wine with a lemon zest you will obtain a juniper macerate which, taken after meals (just a glass is enough), prevents heartburn and bloating.
In addition, juniper essential oil is perfect for a relaxing and emollient massage, especially if combined with that of almonds or jojoba.
It is excellent for purifying and toning the skin: for these I use to crush 20 berries in a cup of cold water, boil and filter. Switch this tonic after the usual cleansing milk. Even in case of acne and impure skin, the juniper tonic is an excellent natural remedy.
For halitosis it is recommended to chew juniper berries.
As a tonic it must be added to the bath water, as, as mentioned, juniper has toning and warming properties.