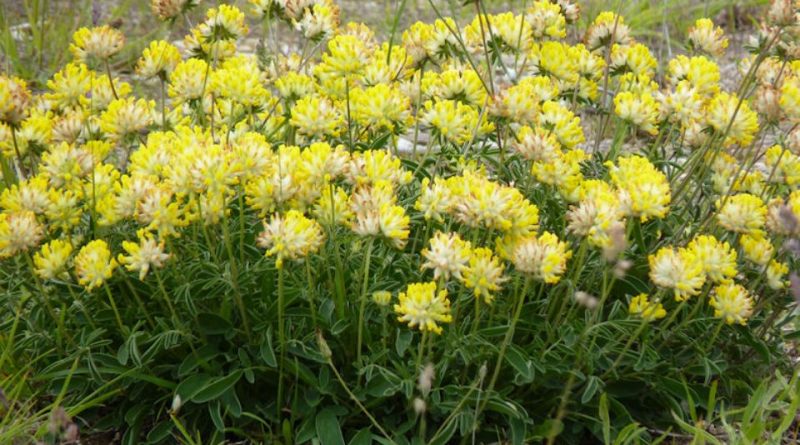 The vulneraria (Anthyllis vulneraria L., 1753) is a herbaceous species belonging to the Fabaceae family.

Etymology –
The term Anthyllis comes from the Greek ἀνθυλλίς anthyllís antillide (diminutive of ἄνϑοϛ ánthos flower) name used by Dioscorides for a marine plant later taken up by Linnaeus.
The specific vulnerable epithet comes from vúlnus, -neris wound: medicamentous, which is believed to be able to heal wounds.

Geographical Distribution and Habitat –
The vulneraria is a spontaneous plant throughout Europe and present from Iceland to the Mediterranean, Asia Minor (up to Iran), North Africa and Ethiopia; it also naturalized in various parts of North America.
Its habitat is that of arid grasslands and rocky environments, where it grows preferably on limestone soil, up to an altitude of 3000 m. 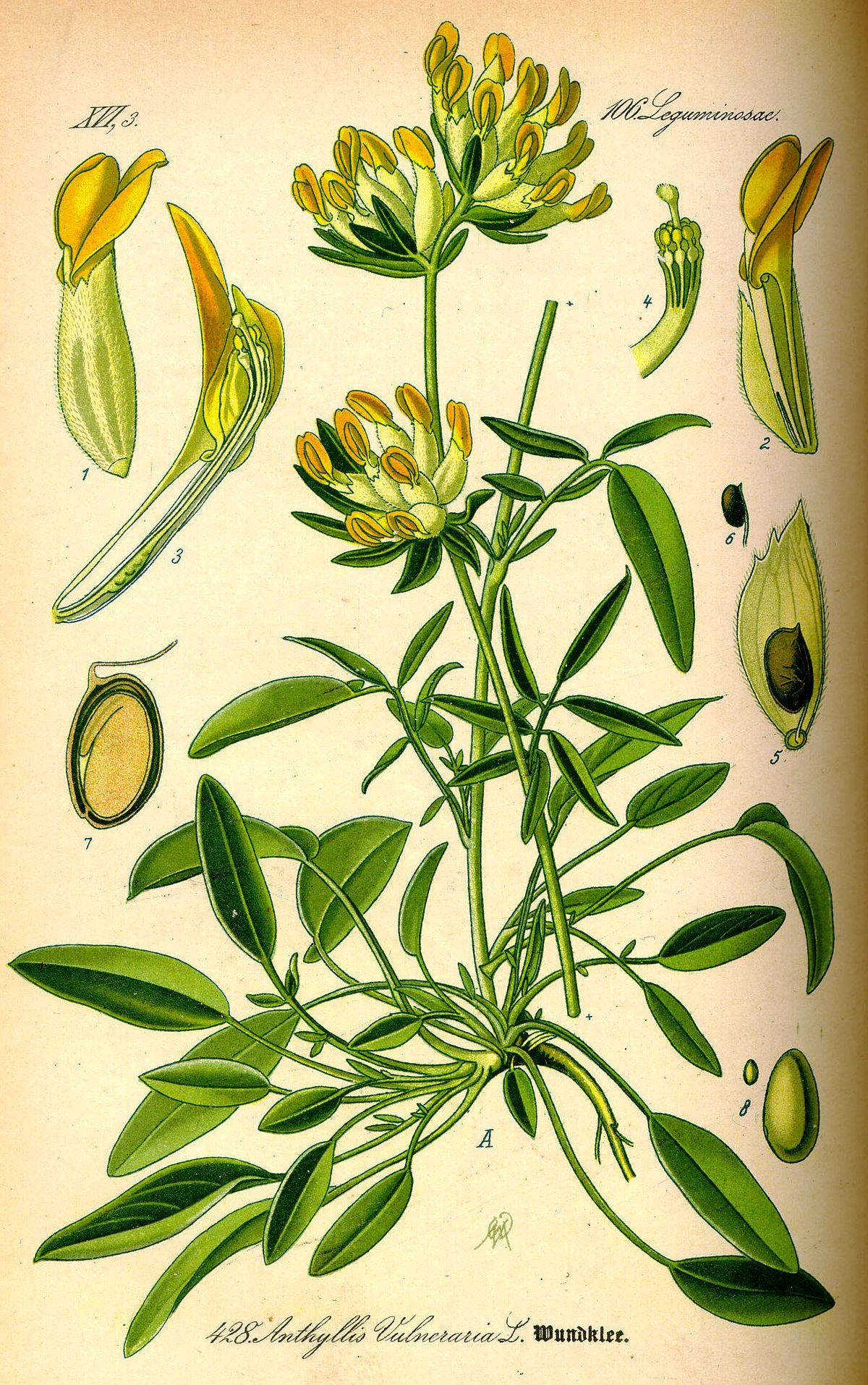 Description –
Anthyllis vulneraria is a polymorphic herbaceous plant, generally perennial or bienne, rhizomatous, with prostrate or ascending stems, hairy at times white and woolly at the end. High from 5 to 40 cm.
The basal leaves are not very numerous and polymorphic, they are divided into 2-3 pairs of leaflets, the caulines are composed, rounded, arranged in pairs with oblong-linear elements.
The flower heads are spherical in shape with thickened flowers, yellow in almost all subspecies (in some they tend to red). The flower has the typical irregular shape of the legume flowers (corolla papilionacea).
Flowering takes place between June and August.
The fruits are small legumes, humped at the base, containing only one ovoid or reniform seed.

Cultivation –
The vulneraria is a spontaneous or naturalized plant that grows best in areas where annual daytime temperatures are between 14 and 20 ° C, although it can tolerate those between 6 and 25 ° C.
The plant prefers an average annual rainfall in the range 600 – 900 mm, but tolerates extremes between 450 and 1,100 mm.
It should be placed in a sunny position and, preferably in alkaline soils, with sandy texture, reeds if it tolerates most of the soils and grows well in poor soils.
As for the pH, the optimal one is 6.5 and 7.5, tolerating extremes between 5 and 8.
Propagation takes place by seed which must be planted in the spring or autumn in cold climates. It is recommended to soak the seeds for about 12 hours in acuqa before sowing them.
It usually germinates in a period of 1-2 months at 10 ° C.
If they were sown in a seedbed, when the seedlings are large enough to be handled they can be planted in the summer.
The propagation by division can be carried out both in spring and in autumn.

Uses and Traditions –
The Vulneraria, also known with the names of Trifolium vulnerario or Trifolium yellow of the sands, as mentioned, is an extremely polymorphic species that easily crosses often giving rise to hybrids. Several subspecies have been described, which exhibit similar morphological characteristics, making their determination difficult. Individual populations or groups of populations appear with distinct characters, but are connected to each other by intermediate populations, making any clear distinction difficult if not impossible.
Probably the Anthyllis vulneraria, in natural conditions, was made up of lineages, of rocky environments, well differentiated and geographically isolated from the wooded areas. By destroying the forest habitats, man has favored and extended the environment suitable for the diffusion and hybridization of these bloodlines.
From the ecological point of view it is a plant that represents a food source for bees, butterflies and caterpillars; it also has a symbiotic relationship with some soil bacteria, these bacteria form nodules on the roots and fix atmospheric nitrogen. Part of this nitrogen is used by the growing plant, but some can also be used by other plants that grow nearby.
The plant contains tannins, as well as saponins, mucilage, coloring substances.
In the past it has been widely used in folk medicine as an astringent and for dressing, also dried flower heads are a substitute for tea.
The roots, leaves and flowers are antitussive, astringent, laxative and wound healing.
Internally it can be used as a treatment for constipation and as a spring tonic.
Externally, the plant is an ancient remedy for rashes, slow healing wounds, minor wounds, cuts and bruises.
In addition to the pigments, the plant contains tanning agents.
In the Middle Ages the Vulneraria was among those “miraculous herbs” that were gathered on the night of St. John, capable of accelerating the healing of wounds to protect both people and livestock from the evil eye
In addition, in ancient times, Anthyllis vulneraria was appreciated as a medicine for wounds.
Neglected by classic herbal medicine, it is now considered useful for its content of saponins, mucilage and tannic acid as an adjuvant for various uses.

Method of Preparation –
For its use this plant can be used fresh during the growing season or harvest in bloom and dried for later use.
In folk medicine it is sometimes used in laxative herbal teas.
The fresh crushed grass can be used in external use, for washing for skin diseases, for wounds and gargles in case of tonsillitis and gum inflammation.