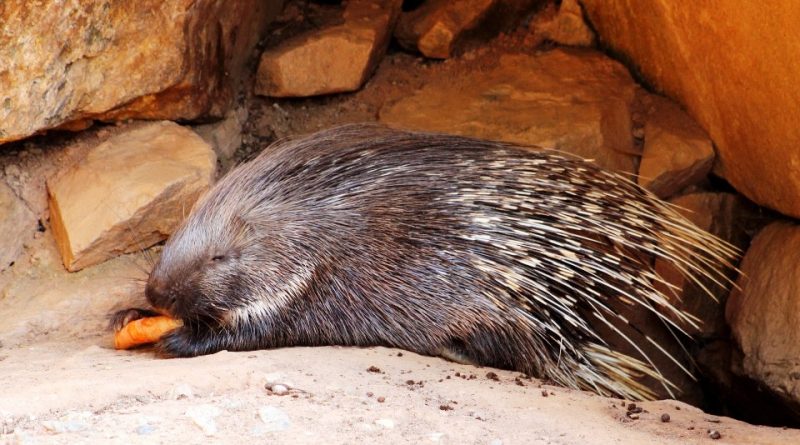 The porcupine (Hystrix cristata L., 1758) is a rodent belonging to the Hystricidae family.

Geographical Distribution and Habitat –
The porcupine is a rodent widespread in Africa, especially from the western area, from Senegal to Cameroon, and in the Democratic Republic of the Congo, Rwanda, Ethiopia, Uganda, Kenya, northern Tanzania and Zanzibar. Probably present in southern Chad and the Central African Republic; it is also present in the Sudanese and Guinean savannas as well as a disjoint distribution in part of the Sahel and Sahara. Some isolated populations are found in Niger.
In Europe it is present in the Mediterranean area where it lives widely in the Mediterranean coastal bio-zone, including the mountain regions of Morocco, Algeria and Tunisia, on the Libyan coast and probably extinct in Egypt.
Furthermore, in Europe it is present as a species introduced in Albania and northern Greece.
In Italy it is present in the central-southern regions and in Sicily.
In Italy the porcupine was certainly present on our territory since the late Pleistocene, confirmed by the fossil record dated to this period. It is not known, however, whether the animal later became extinct and reintroduced by the Romans more recently, or whether it survived seamlessly on our territory, including Sicily.
Its habitat is somewhat varied, in fact this rodent appears very tolerant to a wide range of environments and climates, including warm coastal thickets, dry deserts and cold mountain meadows. In Ethiopia it can be attracted to farms where it can become a plague for crops.
Generally it is found in the same environments frequented by the wild rabbit. 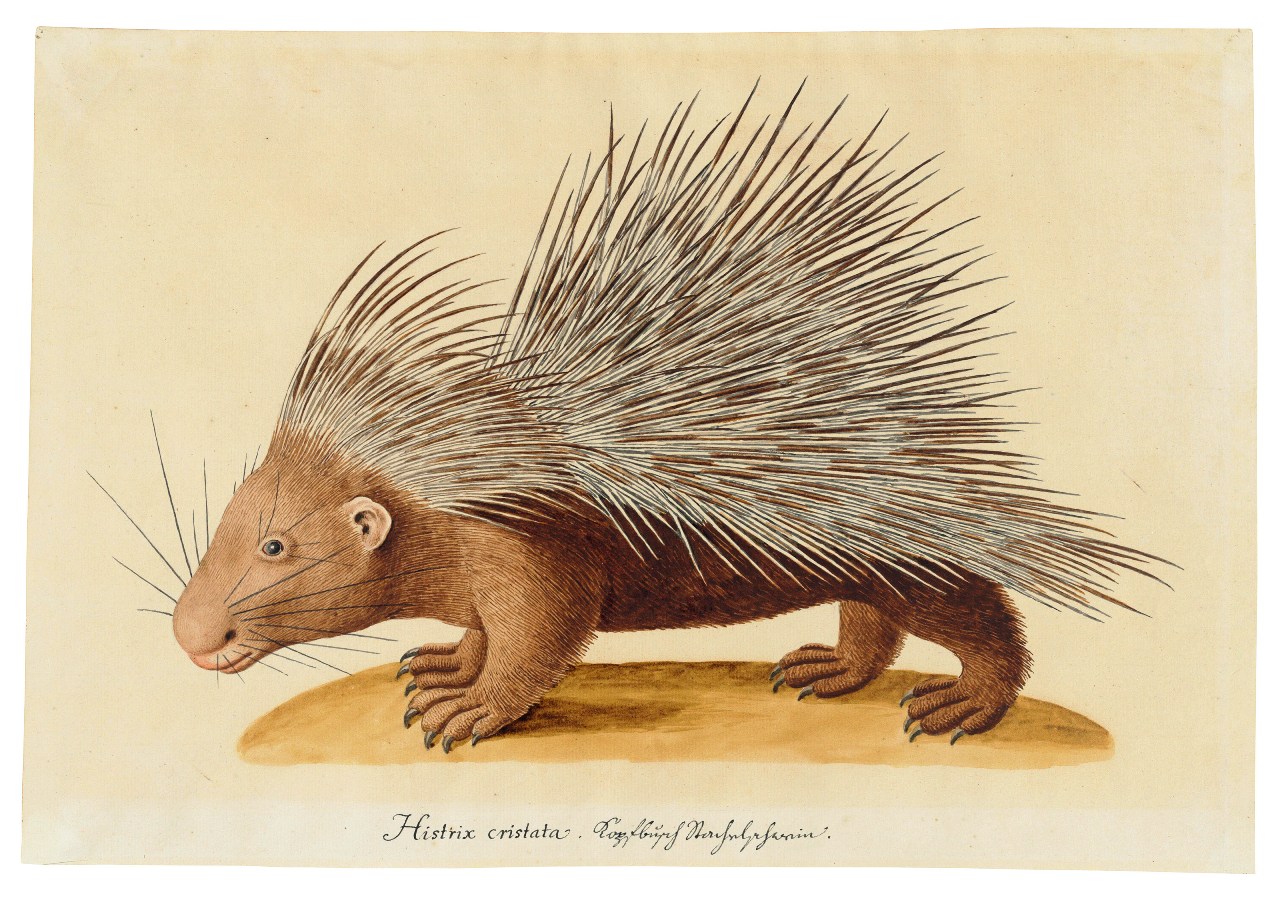 Description –
The Hystrix cristata is the largest African and European rodent and has a length between head and body of 65-85 cm, with a tail of 12-17 cm and an average weight of 15 kg, which can even reach 20 kg.
The Porcupine has a general shape of a globular body, with the rear part more developed given the considerable length of the spines.
The spines on the back, the sides of the body and the tail have a horny blackish color, more or less intense, with whitish streaks that give the aculeate region a streaked appearance of white. The length of the spines is variable and can reach 30 cm on the rump.
The tail is short, usually hidden by the spines of the rump, and is covered with shorter and more fragile spines, some modified in such a way as to obtain a crackle when the tail is shaken. The skull is large and rounded in shape, the incisors are smooth, while the occlusal surface of the molars is formed by complex folds of enamel and dentine, the nasal bones are very long, wide and extend posteriorly almost to the posterior edge of the orbits. Females have two or three pairs of pectoral breasts.

Biology –
The porcupine reaches sexual maturity towards one year of age and the mating period runs from April to May.
During the court the male approaches the female using a bipedal gait and then mounts her. The female solicits copulation through the display of the tail on the rump.
The female gives birth in a lair covered with dry leaves from one to four young at a time after a 112-day gestation. The birth weight is around one kilogram. The baby / mother weight ratio is 10%.
The young are born with open eyes and soft spiny hairs. Breastfeeding occurs with the seated mother since the breasts are located on the sides of the chest. The males assist by recovering and cleaning the young and resting with them in the burrows. They are weaned after 16 weeks of life.
With the arrival of the cold, the porcupine takes refuge in the den until spring without falling into a real lethargy and the average life is around 10-15 years.

Ecological role –
The natural habitat of the Porcupine is represented by plains and hills near cultivated land and in any case where it is possible to dig deep dens.
It is an animal with a highly developed sense of smell, unlike sight and hearing. Given its size, it is very clumsy in its movements and also has twilight and nocturnal habits.
In general it is a terrestrial and nocturnal species, although in captivity it appears to be active also during the day. During the daytime it takes refuge in the caves, in the holes under the trees or in abandoned lairs of other animals and in the rocky crevasses. It does not dig its own burrows. Locomotion is a walk or a slow trot and, due to its large size, it is unable to climb. When frightened or threatened, the crest and the spines stand upright, making the animal appear larger than it is, and the spines in the tail are agitated causing a jingle. If in danger the animal moves sideways or backwards with the tips of the spines erected towards the aggressor. If actually provoked by a potential predator, the individual loads backwards with the spines of the rump, leaving someone stuck in the attacker’s skin, sometimes causing serious injuries. This behavior and the sharpness of its quills provides the porcupine with a truly effective defensive mechanism against potential predators such as the lion.
From a food standpoint, porcupine is a herbivorous species. The main source is fruit, roots, bulbs and bark. Cassava, sweet potato and peanuts are often eaten on farms. It also feeds on bones from iron deficiency. There are several reports of porcupines collecting and chewing bones, with their lairs sometimes filled with them. This habit is thought to be associated with the coating and sharpening of the incisors, perhaps with the benefit of providing an additional resource of calcium and minerals.
Porcupines are social and gregarious animals. The secretions produced by the anal glands are used to mark the territory and to indicate the presence of the individual, the vocal sounds are used for male-female interaction and to warn other individuals of the same species of any dangers or during aggressive encounters. Different individuals can take refuge together in the same den.
As for predators, because of its characteristics and defensive behavior, the porcupine has few threats.
Man can hunt him for food but not in large quantities like other similar rodents. Two species of tze-tze flies that transmit sleep sickness to humans have been observed to feed on the blood of this species.
From the risk point of view for this species, the IUCN, given the widespread use, although used as a food source in different populations, classifies Hystrix cristata as a minimum risk species (LC).