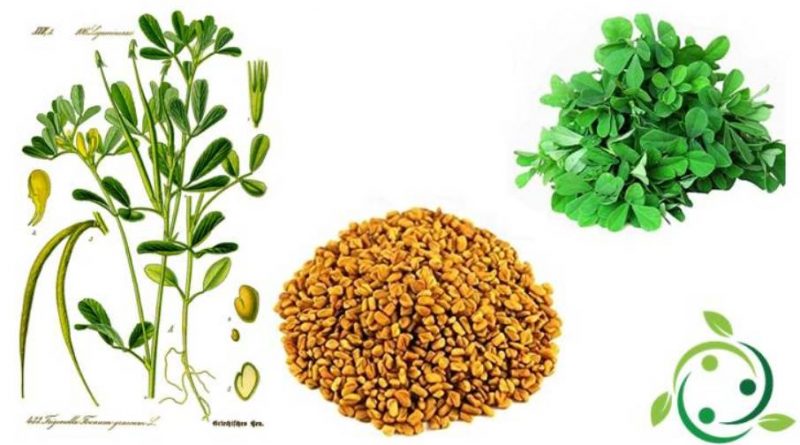 Fenugreek (Trigonella foenum-graecum L.) is a plant from the Fabaceae family whose seeds are used in the kitchen as spices.

Origins and History –
Fenugreek is also called with the term Trigonella because of the triangular shape of the seeds, while the specific epithet “fenugreek” refers to the use that was made in ancient times, for feeding livestock.
It is a plant known since ancient times, so much so that it can be found in Persia and ancient Egypt. North of the Alps it was set in the gardens of the monasteries by Benedictine monks. Cited in Charlemagne’s Capitulare de villis (around 795).
This plant was imported from Greece to Rome, after Cato himself, who was so averse to any import of foreign products, had recommended sowing it, for the manifest qualities of the grass, as fattening hay for cattle.
The Arabs held it in great value and recommended its use to those who wanted to have thick hair and resistant lungs.
In the Middle Ages it was eaten cooked with figs, dates and lots of honey to heal coughs and breathlessness.
It was once very popular in Tunisia by young women who, with ground seeds, sugar and oil, made buns and ate them in the days preceding the wedding in order to be able to present themselves to the groom more plump and with a turgid breast.
Italian popular tradition recommends it to increase milk production in women who have recently given birth and this galactogenic action is also recognized in the U.S. and in Third World countries.
In other parts of the world, fenugreek is still used as a food: in India, for example, it is included in the spices essential for making curry and also sprouts and leaves are consumed, both fresh and dried. In Central America, an oil particularly suitable for baked goods and ice cream is obtained from the seeds of the trigonella. In Arab countries, however, tradition has it that fenugreek seeds are inserted into the diets of girls in view of marriage to make them more desirable for the future husband. In this regard it could be remembered that, in some populations, the trigonella boasts real aphrodisiac virtues.

Description –
Fenugreek is a plant that can reach 60 centimeters in height, and its leaves form compositions similar to those of clover. Its fruits are pods, about 8 cm long, containing about twenty yellow-brown and triangular seeds.
The drug in question is obtained from the fruits of the plant, which are dried, peeled and beaten, in order to obtain the fenugreek seed extract.

Active principles –
Fenugreek owes its wide use and diffusion in history because of its particular characteristics.
Fenugreek seeds contain steroidal saponins (diosgenin, yamogenin), phytoestrogens (vitexin, quercetin, luteolin), alkaloids (trigonelline, gentian), vitamins (PP, A, B1 and C), lysine, tryptophan, mineral salts (iron, phosphorus) and coumarins. For the phosphorus content, in particular, fenugreek is considered a natural supplement.
In addition, fenugreek is a good source of mineral salts, which in addition to iron, contains manganese, magnesium and copper, accompanied by good doses of vegetable oils and proteins.

Properties and Uses –
While cultivating it as food for animals, man over time has learned to recognize the beneficial properties of fenugreek.
The seeds of this plant are commonly and widely used in cooking and have a characteristic odor which is difficult to appreciate for some. The smell of fenugreek is in fact very particular and can be both pleasant and completely repulsive. Precisely because of the intensity of its fragrance, the cultivation of this plant takes place primarily for the perfume industry.
Clinical studies show the validity of the use of this plant for the fight against diabetes: the decoction of the seeds induces a very rapid drop in the blood sugar level.
The role of seeds as hepatoprotectors is recognized, in particular in ethanol intoxication and hepatic steatosis associated with obesity.
It is considered an excellent tonic, as it is rich in saponins, which have the effect of stimulating appetite. As seen it is rich in iron, therefore it is indicated to combat anemias, considering that it increases the production of red blood cells carried out by the bone marrow.
Fenugreek has expectorant and emollient properties, and is also used because of its antiseptic, mucolytic and anti-inflammatory virtues: its uses are manifold.
Fenugreek is also an ally for the health of our skin: in the case of acne, pimples or redness, it can help rebalance our lymphatic glands.
Fenugreek is a plant that in addition to being known for its restorative properties, is also useful as a cholesterol lowering agent.
In detail, the phytoestrogens contained in fenugreek seeds stimulate breast growth and milk production, which however takes on the characteristic odor of the plant, due to the essential oil, with an aroma usually unwelcome for infants.
The increase in hematopoiesis, that is, in the production of blood cells, useful against anemia, must also be attributed to the action on the hormonal system.
Saponins instead perform the cholesterol lowering action, thanks to the ability of these active ingredients to bind with blood cholesterol and thus reduce its intestinal absorption.
Mucilages have anti-inflammatory properties and are therefore indicated in the presence of irritations to the mucous membranes of the gastrointestinal and respiratory systems.
These active ingredients are able to decongest the tissues of the bronchi and lungs in case of cough and to ignite the mucous membrane of the intestine in the presence of colitis or constipation, given the ability to increase their volume in contact with liquids, giving the plant also a mechanical laxative action.
Hydrophilic fibers hinder the activity of glucidoactive enzymes (amylase) thus decreasing the availability of glucose.
The presence of nutrients such as amino acids, vitamins, lipids and minerals, in this plant is useful in case of deterioration, thinness, convalescence and asthenia, for the tonic-restorative action, as it beneficially affects the metabolism, resulting in an improvement of the general state and an awakening of appetite.
These substances make it an effective remedy to regain lost weight after periods of illness or unbalanced nutrition, thanks also to the high calorie content.
In addition, anabolic steroid substances promote protein synthesis and the formation of muscle tissue.
As for other uses, this plant is still used as fodder in India; it is also used as an infusion and as an aroma in organic liquids for electronic cigarettes.
Finally, the possible contraindications for use.
This medicinal plant is not recommended in diabetics for its hypoglycaemic effects. It is not recommended to take it simultaneously with other drugs, as fenugreek could decrease absorption. It is not recommended for use during pregnancy, during breastfeeding, and in case of atrial fibrillation, taking diuretics or laxatives.

Preparations –
Fenugreek can be found as a powder, dry extract, prepared for infusion, to which other extracts are often added (such as licorice) to correct its flavor.
However, it is advisable to buy it in the form of whole and unground seeds in ethnic food stalls in markets or in well-stocked shops.
The parts of fenugreek that can be eaten in the kitchen are seeds, fresh or dried leaves and tender shoots.
It should be borne in mind that fenugreek seeds must be cooked and crumbled, but never ground before use.
International gastronomy offers several ways to use medicinal herbs and benefit from all its incredible properties.
In India dried leaves with a strong bitter taste are used to prepare curry and other spices (Panch phoron) and the sprouts are used to enrich salads; in Turkey it is used to make a pasta called Cemen; in Persian cuisine, leaves are the secret ingredient of ghormeh sabzi and eshkeneh (herbal stews); in Egyptian cuisine the seeds are added to the dough of a pita-focaccia made with fenugreek and corn seeds and in African cuisine it becomes part of a spice called Berberè and ideal for meat stews.
There are also culinary traditions that blanch the fenugreek leaves and use them as vegetables and toast the seeds to create a coffee substitute.
Generally this particular ingredient finds its ideal pairing with beef or lamb, even better if added at the beginning of cooking and sautéed together with garlic or onion.
It can also be combined with vegetables such as mushrooms to prepare first courses or risotto or dishes based on other legumes.
Infusions can also be prepared with fenugreek.
In this case, place a teaspoon in 300 ml of boiling water or 1.5 grams of powder left to macerate for three hours in the equivalent of three cups of water, to be taken two-three times throughout the day.