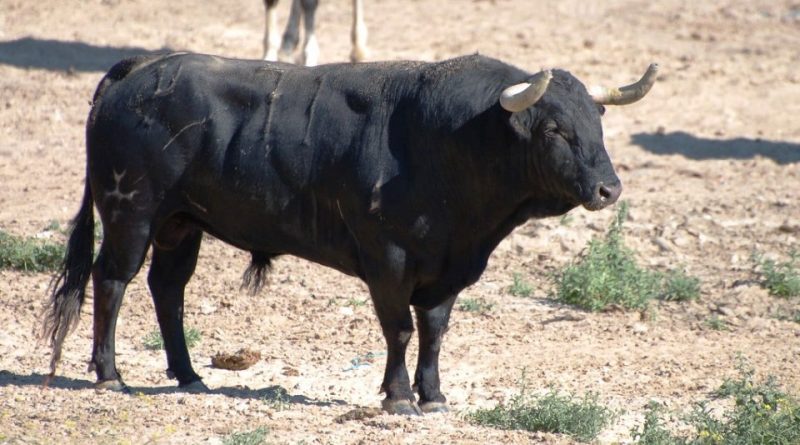 Lidia or Brava is an ancient bovine breed (Bos taurus Linnaeus, 1758) originating in the Iberian region, used in bullfighting and for the production of meat.

Geographical and Area Distribution –
This breed is, in fact, a heterogeneous population of Iberian cattle. Cattle are raised exclusively outdoors in large estates in Spain, Portugal, France and Latin American countries where bullfights are organized.
Fighting bulls are mainly selected for a certain combination of aggression, energy, strength and endurance. During breeding, in order to preserve their natural characteristics, bulls rarely meet human beings.
It can be said without a doubt that it represents the best known and appreciated national breed but there are breeds of a certain importance also in neighboring France.

Origins and History –
According to some researchers, the origin of the fighting Lydia breed can be traced back to the wild bulls of the Iberian Peninsula and their use for games in the arena in the Roman Empire. Although the actual origins are still controversial, genetic studies have indicated that the genetic makeup is unusually old.
The aggressive characteristics of the bulls of this breed have been maintained or even exasperated by selective breeding and has become popular among the people of Spain and Portugal and parts of Latin America where it took root during colonial rule, as well as parts of France southern, where bullfighting spread during the 19th century.

Morphology –
The Lidia or Brava is a breed that has different characteristics of the coat; in addition to the black most appreciated for Corrida, there are many colors that take a typical name: Barrosa, Berrenda, Càrdena, Castaña, Colorada, Blanca ensabanada, Jabonera, Melocotòn, Negra, Perlina, Salinera, Sarda.
These are cattle with a height at the withers of 125-135 cm, with mature bulls weighing from 410 to 700 kg.
The horns present in the males and females are turned forward upwards in white and black tip and represent real offensive weapons.
The muzzle is generally pigmented but variable according to the variety.

Productive attitude –
The Lidia or Brava bred mainly for fighting in bullfighting and also for the production of meat.
The fighting cattle are raised on large ranches in the dehesas of Spain, real ecological paradises of Spain with extensive agricultural techniques.
Both male and female calves spend their first year of life with their mothers; then they are weaned, branded and kept in separate sex groups. When the cattle reach maturity after about two years, they are sent to tienta or tests.
This period, in males, establishes whether they are suitable for breeding, bullfighting or slaughter for meat. The test for bullfighting is given by their aggression towards horses, since the regulations prohibit loading a man on the ground before they enter the bullfighting ring; they also learn how to use their horns in strength tests with other bulls. Due to their particular aggression, these fights can cause serious injury and even death, a great cost for the breeder.
The females are also tested and even more accurately; for this reason it is often said that a bull’s “courage” descends from his mother.
If suitable for bullfighting, the bulls will return to continue the “preparation”. The cows that cross the tienta are raised and are slaughtered only when they can no longer bear the calves.
At three years of age, males are no longer considered calves; they are known as novilli and are ready for bullfighting, even if the novilladas are for the training of bullfighters or novilleros. The best bulls are then selected for bullfights.
According to Spanish law, they must be at least four years old and reach a weight of 460 kg to fight in a first level arena, 435 kg for a second level arena and 410 kg for a third level arena. They must also have a fully functional vision and horns (which must not have been tampered with) in good condition.
The fighting bull reaches a slower maturity than the meat breeds as it was not selected for the increase in mass but to have a well-muscled “athletic” appearance, with a good complex of muscles over the shoulder and neck that confer to the bull their typical profile and strength.
Beyond the ethical considerations on the practice of bullfighting, it must be said that few times every year a bull will be “indult”, that is, pardoned, which means that his life will be spared due to the exceptional behavior in the arena, leading the public to petition the ring president with white handkerchiefs.
If this happens, the bullfighter joins the petition, as it is a great honor to have a bull with whom we fought and was “forgiven”.
So the president forgives the bull by showing an orange handkerchief. The bull, previously healed from his wounds (which are mostly superficial), is then returned to the ranch where he was raised, where he will continue to live his days in the fields. In most cases, this will become a riding bull to pass on its genetic traits to offspring.
The life span of an “indult” bull can reach 20 – 25 years.
One last note. Cattle of this breed have a dichromatic vision, making them color-blind towards red and green colors, which has spread the idea that the red color makes them angry. In fact, they respond only to the movements of the muleta (which is the small scarlet red cloth supported by a rod by the matador). The red color is traditional and is believed to serve to conceal bloodstains and provide adequate light-dark contrast against the arena floor.