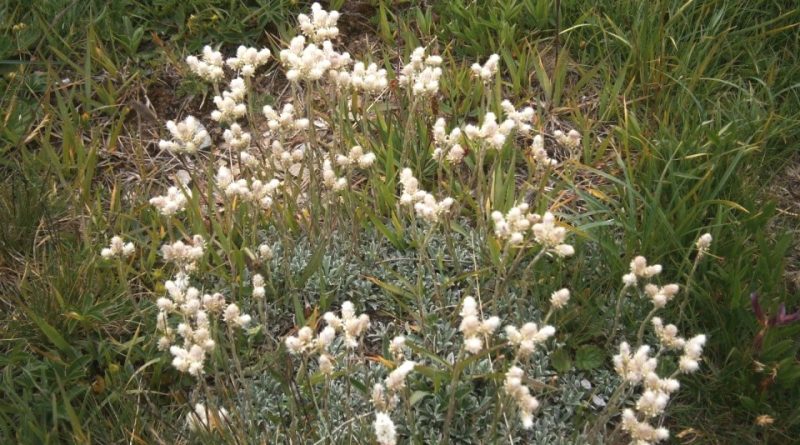 Systematic –
From a systematic point of view, it belongs to the Eukaryota Domain, Kingdom Plantae, Superdivision Spermatophyta, Division Magnoliophyta, Class Magnoliopsida, Subclass Asteridae, Order Asterales, Family Asteraceae, Subfamily Asteroideae, Tribe Inuleae and therefore to the Antennal Genus and to the species A. dioica.
The term is basic:
– Gnaphalium dioicum L.

Etymology –
The term Antennaria comes from antenna antenna: in reference to the silky feather of the hair of the male flower pappus, similar to the antennae of some moths.
The specific dioecious epithet comes from the Greek δις dis twice and οἰκία oikía habitation: dioecious, because male and female flowers are brought from different plants.

Geographical Distribution and Habitat –
The mountain everlasting is a plant found in the temperate-cold areas of Eurasia and North America.
In Italy it is present in the alpine areas and to a lesser extent on the Apennines while it is absent in the South and in the islands.
It is considered an evergreen species of the circumboreal areas and its preferred habitat is varied, being represented by pastures, grassy places (but also stony and dry) and with slightly acidic (or acidic) substrate. In addition, it is also found in coniferous (spruce, fir, pine and beech forests) and broad-leaved woods at altitudes varying from 100 to 3000 m above sea level. 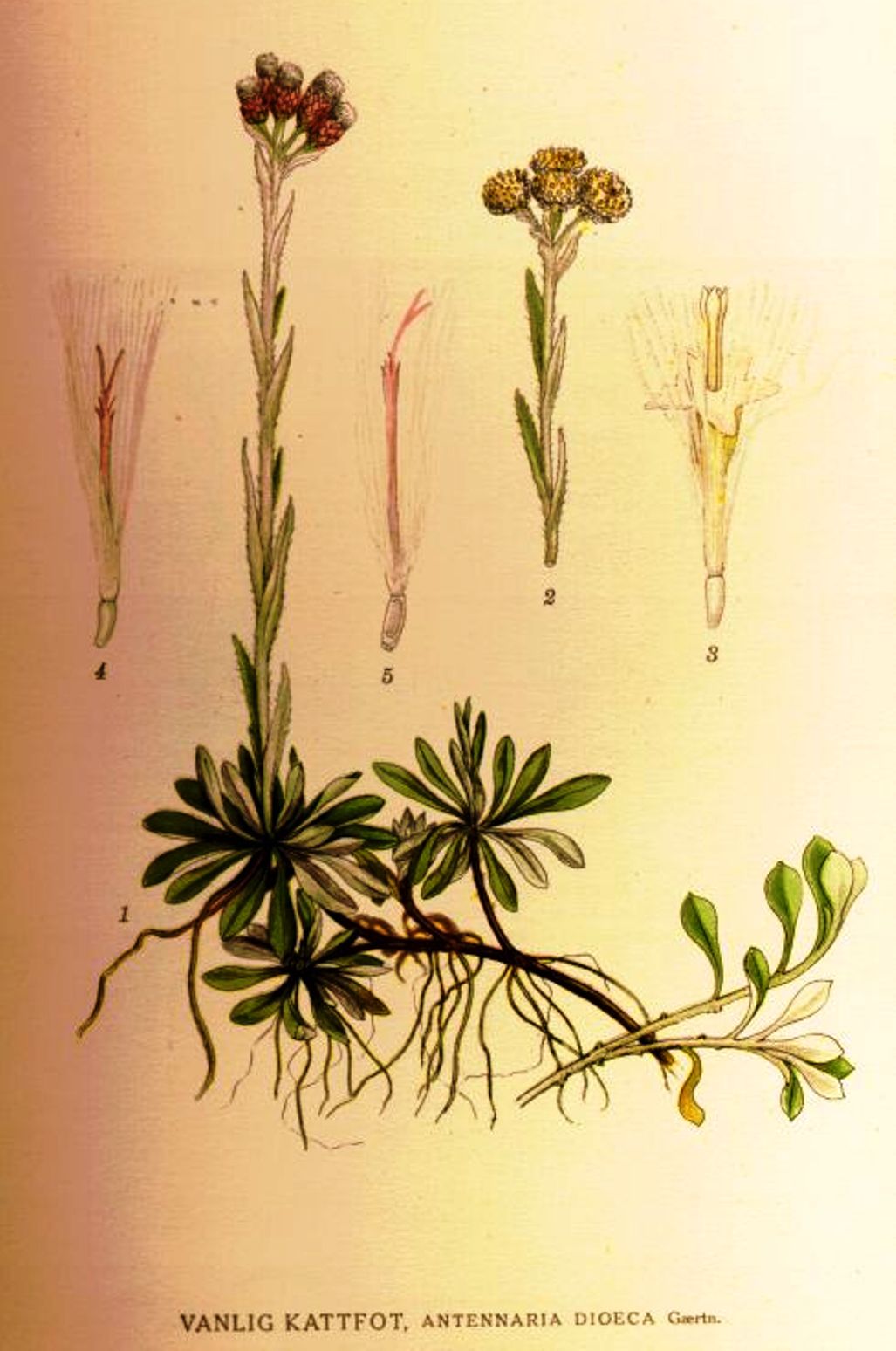 Description –
Antennaria dioica is a small, perennial, bushy plant that reaches a maximum height of 20 cm.
The plant has a robust woody rhizome with an oblique course with creeping (horizontal) and well-rooted epigean stolons (stolon size: 2 – 10 cm) from which several erect stems and scapes form.
The stem is simple and erect, 5-10 cm and tomentose which in some cases can have minimal angularities and is generally leafy.
The basal leaves have an obovate – oblanceolate shape, often mucronate, with a short petiole and gathered in dense rosettes (formed at the end of the stolons) with white – fluffy reflections and the dimensions of 3–5 mm x 20–40 mm.
The cauline leaves instead have a lanceolate shape, hairy and closely connected to the stem in a sessile way thus giving a lesiniform structure.
The flowers are all tubular and actinomorphic present in dioecious plants that have a certain sexual dimorphism: the bell-shaped flower head of male flowers is 5–6 mm wide and the bractal envelope is white or yellowish; while, correspondingly, that of female flowers is 10–12 mm wide and red or pink in color.
The flowers are gathered in an inflorescence which is made up of dense irregular and unisexual corimbose bundles in number of 2 – 10 placed in a terminal umbrella.
The antesis is in the period of May – August and pollination is anemogamous.
The fruit is an achene (cipsella) of about 1 mm. At the top it has a 4-6.5 mm pappus, whitish or pinkish (depending on the sex of the flower), feathered to allow anemophilous dispersion.

Cultivation –
The mountain everlasting, although it is a spontaneous species, is an easily cultivated plant, which prefers fertile but very well drained soils, even quite dry. They are ideal plants for a rock garden or between gravel and pebbles but they can also be grown well in pots.
However, we recommend an exposure in full sun for many hours of the day. If grown in low-light or shaded places, they struggle to grow and the blooms will also be scarce or absent.
The Antennaria plants grown at home even if they are generally satisfied with rainwater require moderate watering in periods of prolonged drought and in summer if the soil is too dry. Pot-grown plants require regular watering especially if they are young.
If these plants are grown as ornamental plants, in order to produce flowers in profusion, they must be fertilized in the spring with an organic fertilizer or a slow release granular fertilizer specific for green and flowering plants.
The Antennaria are easy to grow even in pots as long as they are suitable for the development of the underground part (root) and the epigean part (crown), using a large and deep container, which must be filled with a mixture of universal potting soil, peat and sand and placed in a sunny place for many hours of the day.
Multiplication occurs by seed, and very easily by division of the tufts.

Uses and Traditions –
The Antennaria dioica, as well as with the name of mountain everlasting, is known with that of wild Bambagia, Cat’s foot or simply Antennaria.
Antennaria plants were introduced in Italy in the second half of the XVIII century mainly as ornamental plants suitable for wallpapering rock gardens.
The flowers gathered in bunches can be dried and used for dry flower arrangements or for phytotherapy purposes.
The flowers of this plant are rich in beneficial properties; in fact, the Antennaria dioica has good medicinal properties against liver and gallbladder disorders; it can also be valid for hepatitis and diarrhea. In folk medicine it is also used as a gargle in tonsillitis for its anti-inflammatory and emollient properties.

Method of Preparation –
This plant has long been known for its medicinal properties and for its applications, usually only female flowers are used.