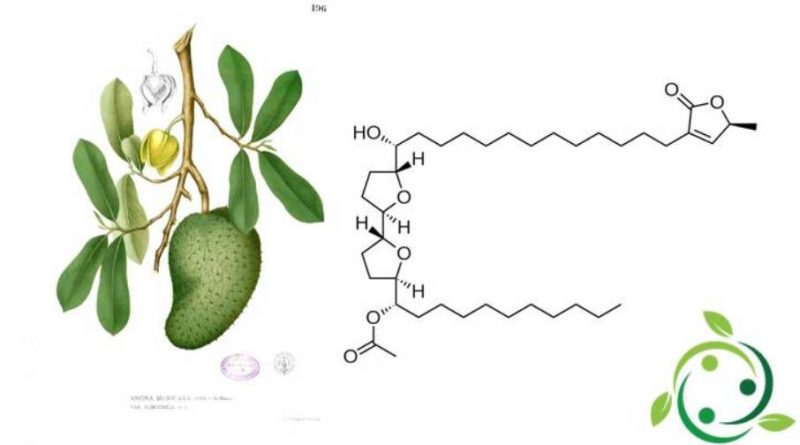 Acetogenins are organic substances of plant origin belonging to the class of polyketides.
These substances consist of an unbranched carbonaceous skeleton containing from 32 to 37 carbon atoms ending in a lactonic structure.
The biosynthesis of acetogenins follows metabolic pathways in some respects similar to those of fatty acids.
Hydroxyl, ketone and / or tetrahydrofuranic groups may be present, as well as double carbon-carbon bonds.
Acetogenins represent a large part of the pigments of the natural world.
The acetogenins, in fact, give coloring to flowers, autumn leaves, lichens, insects and tropical trees.
The only dyes outside of the acetogenins are in fact chlorophyll and tetraterpenes such as carotene.
Since another group of acetogenins consists of substances structurally produced by the metabolism of mold or fungi: many of them are antibiotics including erythromycin.

For this reason, pharmaceutical research on acetogenins is oriented in the cultivation of various types of mold, in an attempt to produce mutations and extract the acetogenins produced active from a biological point of view.
Some acetogenins, particularly those annonaceae, show therapeutic activities. Among these is the Annona muricata which produces the fruit known as Guanàbana or Graviola. These plants have been known since ancient times for applications in traditional medicine.
In general, the fruit and its juice are used to fight worms and parasites, as antipyretics and as astringents. Shredded seeds are used against pests such as lice. The bark, leaves and roots, taken in the form of tea, are considered sedative, antispasmodic, hypotensive and nervine.
Currently, some US research centers are investing in research to evaluate the possibility that Graviola may help eliminate certain types of cancer cells.