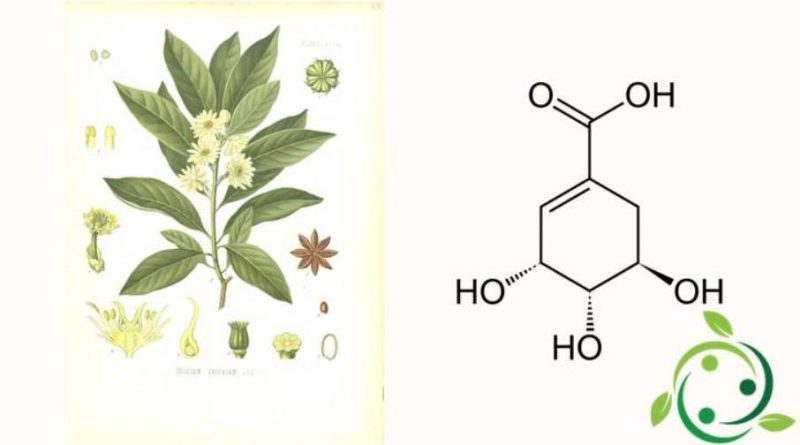 Shikimic acid whose term in the official IUPAC nomenclature is 3R, 4S, 5R-trihydroxycyclohexyl-1-encarboxylic acid is an important biochemical intermediate present in both plants and microorganisms.
Shikimic acid has a brute or molecular formula: C7H10O5.
This acid, more commonly known in the anionic form shikimato, can be obtained in nature in some plants such as some of the genus Illicium spp ..
This substance was first isolated from Illicium anisatum (Japanese star anise).
Shikimic acid is a biosynthetic precursor of the following classes of compounds:
– aromatic amino acids phenylalanine and tyrosine;
– indole, indole derivatives and the tryptophan aromatic amino acid,
– many alkaloids and other aromatic metabolites;
– tannins, flavonoids and lignans.
At the pharmaceutical industry levels, shikimic acid obtained from Japanese star anise is used for the production of antivirals.

Although shikimic acid is present in many autotrophic organisms, it still represents a biosynthetic intermediate and is generally found in very low concentrations. Shikimic acid can also be extracted from the seeds of liquidambar fruits, a plant abundantly present in North America, with a yield of 1.5%. On a comparative level, star anise has a production yield of 3-7% shikimic acid. Recently, the production of shikimic acid, which can also be obtained from Escherichia coli crops, has been significantly improved.
Shikimic acid, in Asian countries, has a long tradition in both herbal and culinary fields.
The extract has also been used in Europe since the 17th century in particular as an aroma.
The uses of shikimic acid concern:
– products suitable for odor control;
– prevention and treatment of acne;
– treatment and prevention of dandruff;
– exfoliating products.
It is also indicated in deodorants since it is able to inhibit the formation of bad smells.