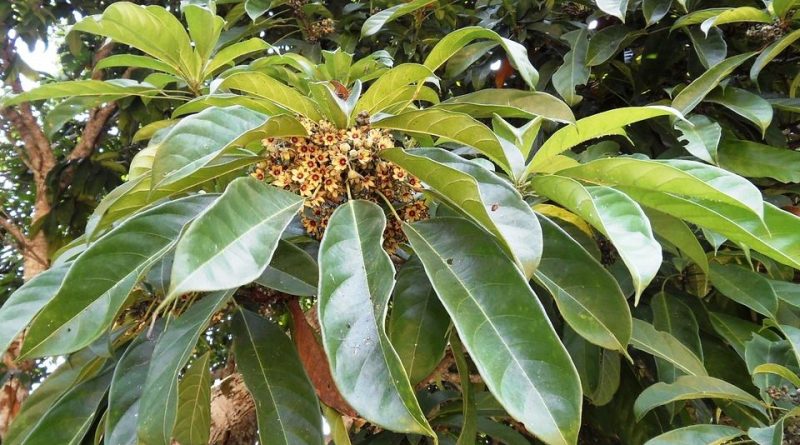 Systematic –
From a systematic point of view it belongs to the Eukaryota Domain, Kingdom Plantae, Magnoliophyta Division, Magnoliopsida Class, Dilleniidae Subclass, Malvales Order, Sterculiaceae Family and therefore to the Genus Cola and the Species C. acuminata.
The term is synonymous:
– Sterculia acuminata.

Etymology –
The term of the genus Cola comes from the Sudanese vernacular name kóla.
The specific epithet acuminata comes from acumen punta, acuity, due to the shape of the leaves.

Geographical Distribution and Habitat –
Cola acuminata is a plant native to the tropical forests of West Africa.
Its habitat is that of tropical forests and is cultivated in Brazil, Jamaica and the West Indies. 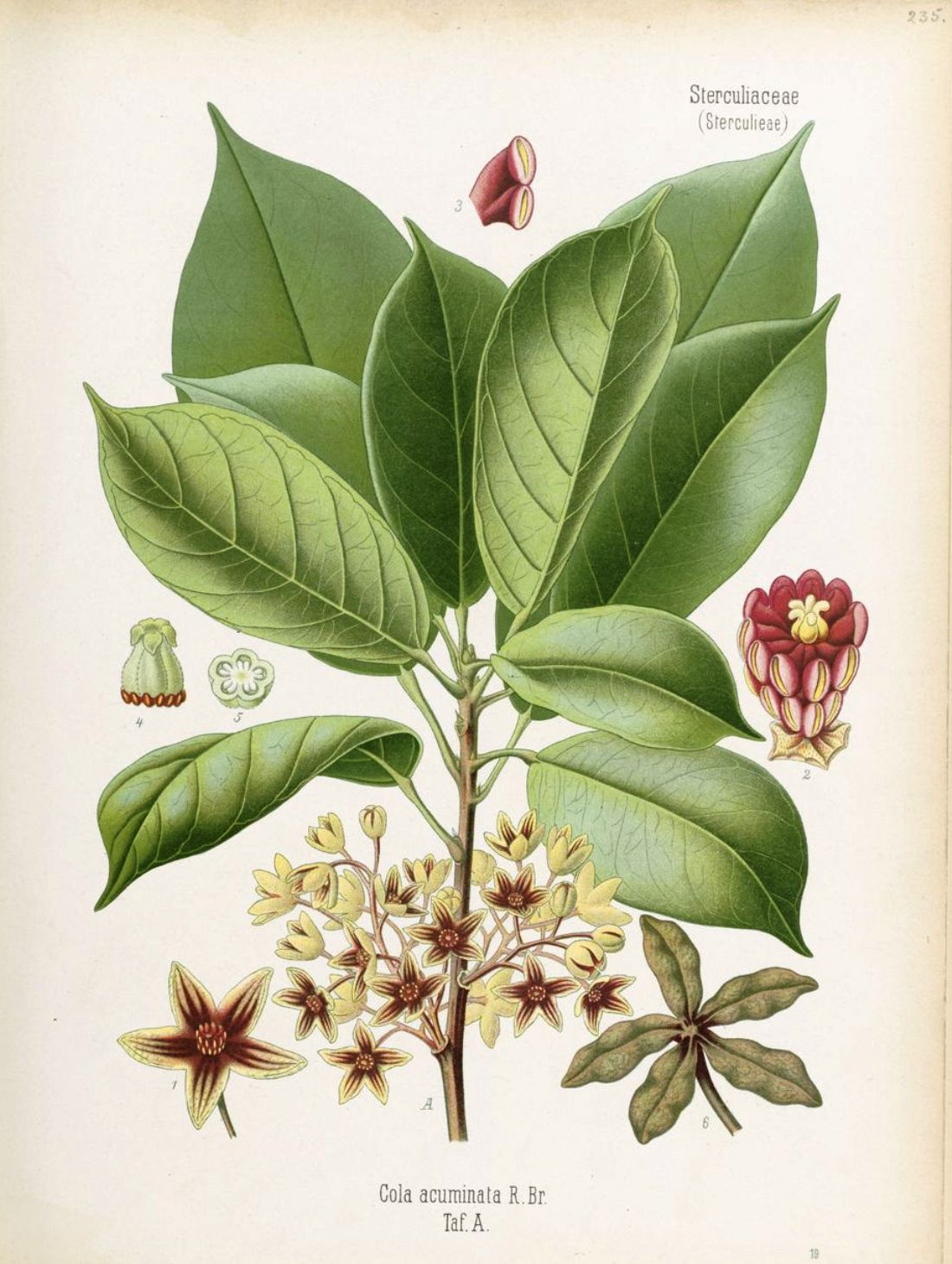 Description –
The Cola acuminata is a medium-sized tree that reaches 10-15 m in height.
It has low branches and gray or dark green bark.
The leaves are alternate, dark green in color and oval and sharp in shape, carried by a long petiole.
The flowers are white – yellow, grouped in raceme inflorescences, consisting of male flowers, female flowers and hermaphrodite flowers. The flowers are pollinated by insects.
The fruits, consisting of 2-6 follicles, are rough in texture, mottled and up to 20 cm long and contain large, flat and bright red seeds, commonly known as cola nuts.

Cultivation –
The cola tree is a plant that is vulnerable to frost and must be grown in climates similar to its areas of origin. It is a plant that prefers moist, sandy, or well-drained clayey soils with neutral acidity.
It also requires a sunny exposure and can tolerate drought.

Uses and Traditions –
The first to describe and classify the Cola species was Ambroise Marie François Joseph Palisot de Beauvois, who was a French botanist and naturalist.
In the West, Cola spread at the end of the nineteenth century thanks to the arrival on the market of the famous carbonated drink created by Dr. John Pemberton.
Cola nut has always been used against fatigue or for its aphrodisiac action and traditionally it was consumed by chewing the seeds. In the past, such was the value of cola that trees were always planted near villages and in commercial exchanges, where kola nut was traded for gold dust.
The Cola plant is consumed in some regions of Africa during rites and ceremonies, to welcome, as a symbol of friendship.
Furthermore, always in Africa, cola nuts can be used in traditional medicine or as a food coloring, while wood can be used as fuel or to make furniture, houses or boats.
Today, kola nut is part of the composition of several drugs: of these, some are used to fight asthma or chronic lung diseases.
The fruits contain about 2% of catechin-caffeine, theobromine and choline. They are roasted, pounded or chewed and can be added to drinks, such as tea or milk, or cereals such as porridge. When whole walnuts are chewed, they have a bitter taste, but leave a sweet aftertaste that enhances the flavor and sweetness of other foods during the meal. They are also ground into a powder and added to drinks to increase alertness, reduce fatigue and increase endurance.
Its fruits are harvested from the forests of the Democratic Republic of the Congo, on the west coast of Africa, including Nigeria, Benin, Togo, Ghana, Liberia, Sierra Leone, Guinea, Guinea Bissau.
In general, Cola has a tonic, slimming, stimulating, bronchodilating, aphrodisiac, antiasthenic action and is able to improve sports performance. Cola is a diuretic, used as an anti-fatigue and as a source of caffeine. Cola, in fact, is able to improve attention, learning and the ability to memorize, stimulates the brain and counteracts sleepiness. Thanks to cola it is possible to reduce tiredness and depression, and fight against headaches, hypertension and poor circulation. Cola has draining properties and helps eliminate excess fluids and lower body weight. For this reason, it is possible to find it in various herbal remedies as a slimming and neuromuscular stimulant.
The intake of Cola is however contraindicated in patients with hypertension, insomnia, heart disease and hyperthyroidism. It is not recommended to take it during pregnancy and while breastfeeding, and should not be given to children. The side effects of cola are: insomnia, irritation of the gastric mucous membranes and nervousness. If taken in excessive doses, cola can also cause nausea, headache, vomiting, palpitations and arrhythmias, high blood pressure.
In addition, it is good to remember that kola nut contains caffeine, which in the long run causes addiction, therefore it should not be used together with other stimulants to avoid serious consequences such as cardiac arrest. Cola can interfere with stimulant, analgesic, bronchodilator, calming and sedative drugs, altering its effects. Finally, kola nut can increase the risk of bleeding if drugs are taken to prevent osteoporosis, anticoagulants and antiplatelets.

Method of Preparation –
Of the kola nut the seed is used without its external coating. This is dried and then ground to use the powder. Cola powder, as mentioned, can be used in several ways.
The cola infusion is prepared by combining a cup of boiling water with 2 g of cola nut powder, leaving everything to infuse for about 10 minutes. You can consume this infusion 3 times a day.
The kola nut powder can be added to each drink (in the dose of 1 teaspoon per glass) up to a maximum consumption of 2 g per day.
Then there is the liquid extract of soda which can be taken up to 1.2 ml maximum 3 times a day, and the mother tincture of cola, for which it is recommended not to exceed 4 ml per day.
By placing 50 g of kola nut in 1 liter of wine to macerate for ten days, you obtain a toning drink to be used in moderation.
Obviously any preparation and use must be submitted to a medical opinion in advance.