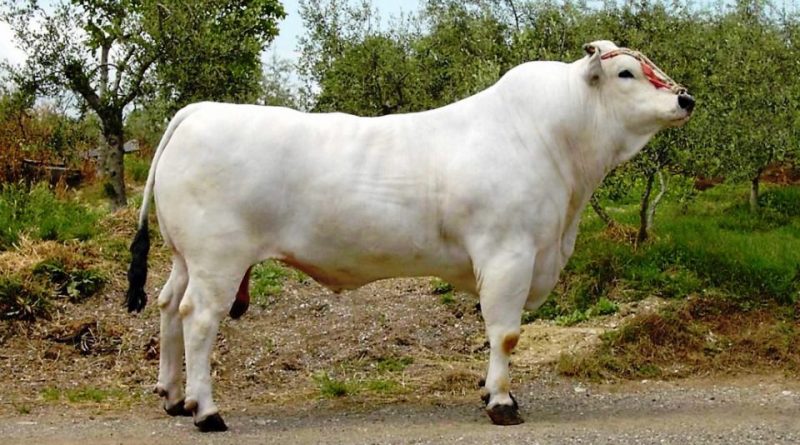 Chianina is a bovine breed (Bos taurus Linnaeus, 1758) native to central Italy with an aptitude for meat production.

Geographical and Area Distribution –
Chianina is an Italian bovine breed and owes its name to the Val di Chiana. It is believed to be an indigenous breed from Central Italy and in particular from Lazio, Tuscany and Umbria. At one time this breed was used as a driving force, while now it is bred exclusively for the production of meat.
Chianina is one of the most common breeds in the world. Many subjects of this breed have been exported to Asia, China, Russia, Canada, the United States, Brazil and Australia, where they are intended both for pure breeding and in crossbreeds with local breeds.

Origins and History –
Chianina is among the oldest breeds in the world, known for over 2000 years.
It was already mentioned by Pliny the Elder and other Latin authors (Bos vastos et albus) and was particularly used as a working breed by the Romans and Etruscans; moreover for its white coat it was used in triumphal processions and in sacrifices to the divinities, so much so that Virgil underlined its beauty.
Its original breeding in the middle Tiber valley and in the Val di Chiana dates back to at least 22 centuries from where it then extended to the provinces of Arezzo, Florence, Livorno, Pisa, Siena and Perugia.
According to a 2007 study conducted by the Catholic University of the Sacred Heart of Piacenza, aimed at shedding light on the origin of the Etruscans, the mitochondrial DNA of Tuscan Chianina and Maremmana cattle was analyzed.
This was genetically similar to that of Anatolian cattle. But a similar result, in the same study, was also found for Calvana, Cabannina, Cinisara and Rendena cattle.
A more recent 2015 study by the University of Tuscia led to the conclusion that Chianina, Romagnola and Marchigiana have common origins, and still a genetic relationship with the remains of a bovine who lived 1000 years ago in Ferento, Lazio. The phylogenetic tree based on the analysis of 4 and 30 microsatellites shows how the Boscarin, an Istrian breed of cattle considered close to the podolica, and the Sicilian Modicana and Cinisara are closer to the Anatolian cattle than Chianina and Romagnola are, which are, however, in a more intermediate position between the Iberian and the Balkan and Anatolian cattle.
The ancient origins of this breed obviously influenced local culture and traditions. In fact, although its breeding is no longer geographically limited, the Chianina breed enters as an integral part of the traditions of many municipalities in the Val di Chiana and Tuscany.
Among these we remember that a Chianina calf is given as a prize to the winner of costume football, held every year in the Tuscan capital.
In Siena, during the historic walk, which precedes the Palio race, four Chianina oxen pull the Carroccio on which the cloth is hoisted which will be given as a prize to the winning district.
Furthermore, many gastronomic events are connected to this breed and in particular to the famous “Florentine steak” which is obtained from these cattle.
These include the “Chianina Steak Festival” which takes place on the last weekend of June, in the municipality of Sestino (AR).
Similar event is that of the famous “Steak Festival” which takes place every August 15th in Cortona (AR) on the occasion of which thousands of Chianine are cooked every year on a 14-meter grill.
The National Association of Italian Cattle Breeders A.N.A.B.I.C. since 1966 he has been managing the genealogical books of the Italian white breeds (Chianina, Romagnola, Marchigiana, Maremmana, Podolica).

Morphology –
Chianina is characterized by somatic gigantism, being in fact the largest of the known breeds of cattle in the world.
The bulls can reach and exceed 190 cm in height at the withers, with a weight that can reach 1,700 kg; in females the height at the withers can exceed 155 cm, with a weight of 1,100 kg.
The coat is white porcelain in both sexes. In the male there are black hairs in the rear train that give it a gray tinge and are sometimes also present around the eyes.
The calves, from birth to 4-6 months, are fromentino color.
The muzzle, the tongue, the palate and the natural openings are black pigmented.
The head is light and elegant, more elongated in cows, with a broad forehead in bulls.
The neck is of medium length and has little dewlap.
The horns are medium short and coarse, with a black tip.
This breed has long, robust limbs and excellent appendages; the foot is a little small, compared to the size, but with hard and resistant claws, which makes them optimal for the job.
The skin is also thin and pigmented.

Productive attitude –
Chianina is a bovine breed that in the past was dual-minded: meat and work. Today this breed has been specialized in the production of meat and turns out to be the second beef breed in Italy.
It shows excellent adaptability to grazing in various conditions because it is an excellent user of fodder and resistant to diseases and ectoparasites.
It has a good longevity but on the other hand is not very early. The most prized meat comes from the female (Scottona) for tenderness and small size. In order to give the best as a meat animal, its breeding must be permanent, or as they call it in the Val di Chiana, “tied”; in this typology the animal is tied above the manger, or confined in boxes that contain a certain number of animals.
Chianina, in general, provides lean meat (only in very large subjects there are infiltrations of fat between the muscle masses, which is called marbling, which accentuate the flavor.
The so-called Florentine is obtained from the meat of this breed; the flavor of this cut of meat also depends on the high aging times of not less than 15 days, necessary to improve its tenderness and increase muscle proteolysis, the final result of which is the formation of polypeptides and amino acids which confer the characteristic flavor of this cut.
As far as milk production is concerned, this is just enough for the calf to be raised.
Selections are currently being made in order to increase the earliness of development and the greater yield of meat of the finest cuts, such as above all the back-lumbar region from which the famous Florentine steaks are obtained.