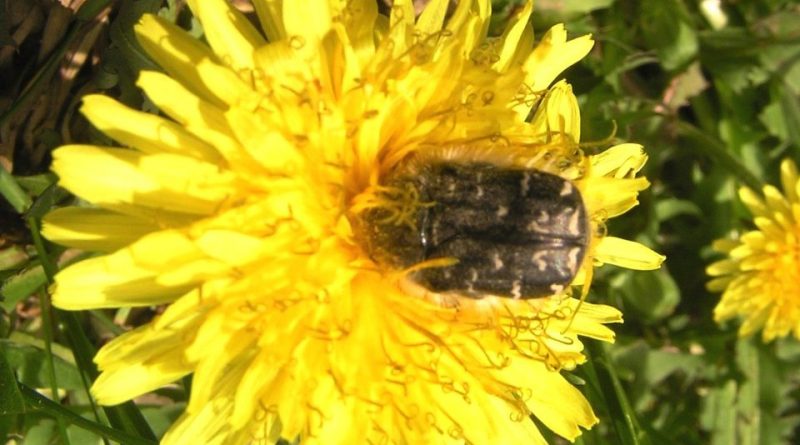 The Hirta beetle (Tropinota hirta (Poda, 1761)) is a beetle belonging to the Scarabaeidae family.

Geographical Distribution and Habitat –
Hirta beetle is an insect widespread in Europe, North Africa, Asia Minor and the Middle East. In Europe it is present mainly in the Mediterranean basin and everywhere in Italy.

Morphology –
The adult Tropinota hirta is about 8-12 mm long.
The insect has a matte black color with white spots, but which can sometimes be absent.
It is recognized for the back covered by a relatively long hair.
The legs are relatively long, but they do not allow the insect to run quickly; on the other hand, they offer him a firm hold when the insect lands on the plants.
The elytra are stained whitish.
The head has compound eyes, a pair of powerful jaws and short antennae. The lower part of the body has a long and thick hair, especially in the part corresponding to the thorax.
The larvae are smaller in size than those of the other Cetoniini.
They have a characteristic “C” shape, with sclerified head and legs to allow the insect to move more easily in the ground.
The garment is equipped with a pair of powerful jaws suitable for shredding food.
The abdomen is the most voluminous part of the body of the larva and contains the digestive tract, which is always full of food.
Along the sides of the larvae there are a series of chitinous holes which constitute the mouths of the insect’s respiratory system.

Aptitude and biological cycle –
The adults of Tropinota hirta come out in the period of April – May and attend the flowers of the different host plants.
Arriving in May – June, after mating, which takes place on the flowers, they are interred to lay on average about twenty eggs which are scattered in the rotting wood of old stumps, in potting soils or in soil particularly rich in decomposing organic substances.
Embryonic development lasts on average about fifteen days and the larvae develop in about two months, after having performed two molts.
Upon reaching maturity they close within a spheroidal earth cell with smooth internal walls.
After a few days the first pupae can be found, while the new adults are formed in September, after 2 – 3 weeks of pupal life.
These remain inside the respective cells for a few days to harden the integuments, then leave the ground briefly and then take refuge again to overcome the winter.
It is therefore an insect that makes only one generation a year.
As for attitudes, adults feed on flowers and are diurnal.
The larvae feed instead on humus and plant debris located underground.

Ecological role –
The damage of this beetle, which manifests itself on flowers (especially on white-flowered varieties) is caused by adults who feed on the reproductive floral organs; the attack causes the petals to fall and a faster necrosis of the standard flower structures.
The larvae, on the other hand, do not create problems as they feed, as mentioned, especially in the subsoil of organic matter in various states of decomposition.
The fight against Hirta beetle is almost never justified and only if the infestations are so serious as to compromise a large quantity of flowers.
In any case, the interventions must also be evaluated according to the presence of the pollinating insects and the Diphtheria Diptera, frequent visitors of the flowers.