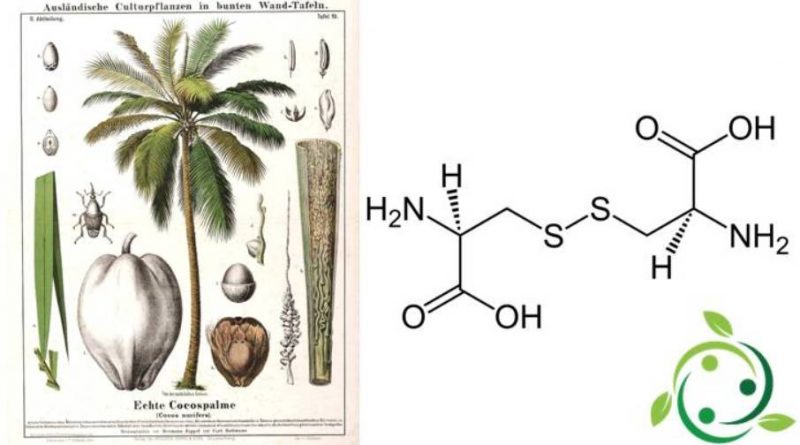 The cystine whose term in the official IUPAC nomenclature is: acid (2R, 7R) -3,3′-ditiobis (2-aminopropanoic), is sulfur amino acid with brute or molecular formula: C6H12N2O4S2.
Cystine is therefore a sulphured chemical compound consisting of the interaction of the SH groups of two cysteine ​​molecules and consequent formation of an S – S disulfide bridge.
It appears as a colorless solid with a melting point of 260-261 ° C.
This molecule was discovered in 1810 by William Hyde Wollaston but was recognized as a protein component only when it was isolated from a cow’s horns in 1899.
This molecule enters the constitution of many proteins. The quantity of the S – S bridges of c. it is found most frequently in keratin, while some Vertebrate proteins seem completely devoid of it, and globular proteins, including enzymes, contain variable quantities.
Cystine, in general, in the tissues of living organisms, is among the less frequent amino acids (1-2% of the total residues) with the exception of the skin and hairs that contain up to 5% of it.
Cystine is also found as a free amino acid in almost all biological fluids and is a non-essential amino acid for humans and animals (can be synthesized from methionine). By reversible reduction it gives rise to two cysteine ​​molecules: therefore the two amino acids follow the same metabolic pathways in the body. The disulfide bonds are able to join different polypeptide chains or create bridges between distant areas of the same chain, thus determining the shape of the molecule and the relative position in space of the groups that constitute it.
In nature cystine is contained in some plants such as coconut palm (Cocos nucifera L., 1753), in addition, dietary supplements of N-acetylcysteine ​​are a source of cystine, but the doses are limited by side effects. One of the richest sources of cystine is undenatured whey protein.

Cystine is not digested or hydrolyzed significantly in the stomach, but is transported by the bloodstream to the various cellular areas of the body. Here the weak disulfide bond is split by producing cysteine, which is made available for the synthesis of glutathione.
This amino acid is significantly present in human hair, in particular it is responsible for the wavy shape of the hair, undulation due to the formation of the characteristic disulfide bridges (-S-S-).
Cystine is also used by the body as a source of cysteine ​​necessary for the biosynthesis of glutathione, together with glutamate and glycine. In particular, cystine is believed to be the preferred molecular form of immune system cells, including macrophages and astrocytes. Lymphocytes and neurons instead prefer to use cysteine ​​directly to carry out the synthesis of glutathione.
It should also be remembered that cystinosis is a hereditary disease connected to an alteration of the metabolism of amino acids and in particular of cystine, which is deposited in various organs and is abundantly eliminated in the urine (cystinuria). The slightly soluble cystine tends to accumulate in the reticulo-histiocytic cells of the kidney (as well as the liver, spleen, lymph nodes and conjunctiva), causing changes in the renal tubular function. If the disease is not promptly diagnosed and treated, the prognosis is severe. Cystinuria is found in various morbid pictures and also in another hereditary affection mostly benign (sometimes even asymptomatic), but sometimes accompanied by the formation of cystine kidney stones.