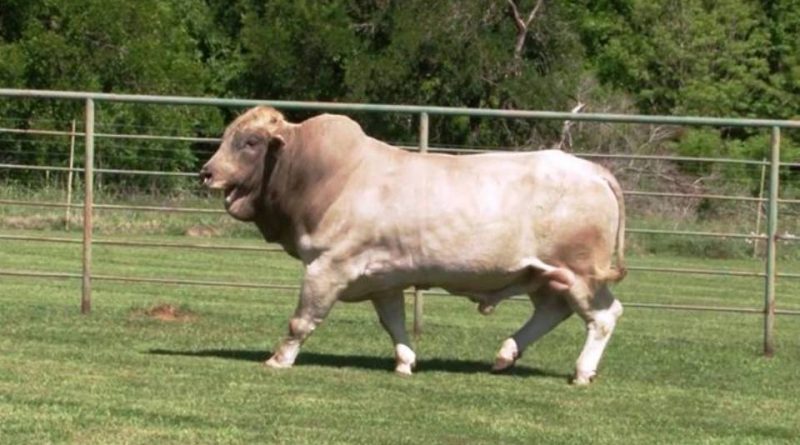 Charbray is a bovine breed (crossbreed Bos taurus L. and Bos taurus indicus) obtained between the Charolais breed and the Brahman native to Australia, with an aptitude for the production of meat.

Geographical and Area Distribution –
The Charbray breed of cattle is a widespread breed mainly in Australia and the United States.

Origins and History –
The Charbray breed was initially tested in Australia in the early 1960s. At that time the founders of the Charbray Society crossed Charolais cattle with Brahman cattle to obtain this breed.
Genetically Charbray is made 5/8 of Charolais blood and 3/8 Brahman which has now become a breed in its own right after years of selection.

Morphology –
The Charbray is a breed that is recognized for the presence of the hump, which is almost undefiled in Brahman but visible in these cattle, which obviously denotes the origin from the Bos indicus.
The color of Charbray cattle varies from white to red, colors that are accepted and allow entry in the breed register.
It is a medium to moderate breed, with calves that are generally light brown when they are born and that usually lighten in the usual creamy white color within a few weeks.
The height at the withers varies between 130 and 150 cm.
The weight of the cows is around 900 kg, while that of the bulls between 1,300 and 1,400 kg.
The muzzle is pink depigmented.
It is an acorna breed.

Productive attitude –
Charbray is a bovine breed with a prevalent aptitude for the production of meat, with increases that can reach 0.8 – 1 kg and more per day for grazing cattle.
These are animals that in fact grow rapidly and have an exceptional feed conversion capacity.
Charbray reaches slaughter weights as early as 12 – 15 months, with the presence of lean carcasses.
They are also used excellently as crossbreeding animals for the generation of animals with high yield and quality of meat.
Charbray females reach puberty at about 14 months and are already mature at birth at about 2 years, with the possibility of giving birth every year.
Many females of the Charbray breed had, in fact, 13 – 14 calves in 13 and 14 years. They also have good milk production for calves, ease of delivery and are excellent mothers.
From the physiological point of view, the bulls of this breed are structurally solid and have the ability to adapt in various types of environments, from cold to warm.
These animals have the ability to travel large distances for grazing and have, in addition to resistance to climatic factors, good resistance also to pests and diseases and good adaptability to pastures even less rich as that of the hottest southern areas.