Geographical Distribution and Habitat –
The Black-winged stilt is a shorebird whose habitual habitat is that of the shallow free waters of lagoons, salt marshes, marshes and artificial lakes, with sandy and stony shores. They also adapt easily to artificial environments, such as rice fields and salt marshes.
Its diffusion area is that around the Mediterranean Sea, and to the north as far as Germany and the United Kingdom; it is present in Africa both on the Mediterranean coasts and in Madagascar; in Asia both in the central area and in areas of Southeast Asia and also in East Asia (China, Taiwan and some islands).
In Italy it is estimated a population of about 4000-5000 pairs of knights of Italy, the second largest European population after the Spanish one, where in fact about 12000 couples nest. The nesting areas are mainly in the Po Delta, in Orbetello and in Sardinia. Minor colonies are scattered throughout the rest of the Po Valley (Oasis of Torrile, Salina di Cervia, Caldogno, rice fields of Piedmont, Venice Lagoon, Mincio Regional Park, Nature Reserve of the Isonzo river mouth) and in the South (lakes of Lesina and Varano, Saline di Margherita di Savoia and Sicily).
The Italian populations seem to overwinter in the swamps of Mali and Senegal, such as the internal Delta of Niger, but some remain in Italy even in winter: in the cold season they are concentrated mainly in Sardinia, Sicily and a few specimens also in the saline of Comacchio. 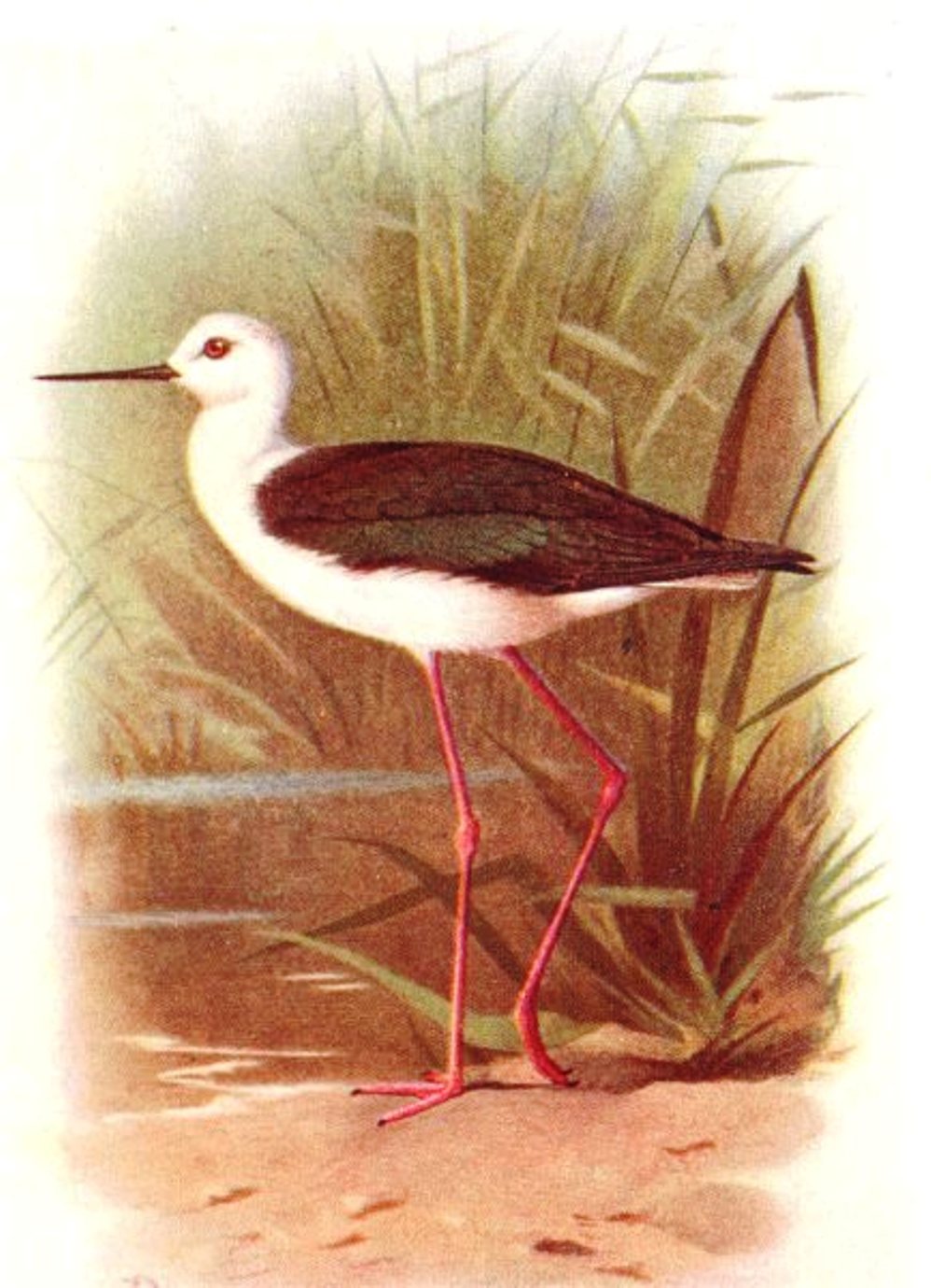 Description –
The Black-winged stilt is a characteristic wader from 34 to 40 cm long, with a wingspan of 67 – 83 cm and an average weight of 160 – 200 grams.
The legs are red, very long, similar to stilts, which can reach 30 cm in length. Walk erect on the legs that in flight protrude beyond the tail for a length similar to that of the body.
The plumage is black and white, almost identical in both sexes. The female differs from the male in the brown scapulars, instead of the black ones. The neck in the male is blacker than the female, but this difference is not always present, so much so that it often appears blacker in the females than in many males.
In young people, adult black is replaced by a brown tint.
Dorsally sand-colored down jacket with small dark spots and ventrally white.
The beak is black, thin and straight.
The eye has a red iris, with a very large pupil.
The Himantopus himantopus has a very elegant flight with the flapping of the wings that alternates with short glides and with the legs that come out from the length of the body.
The voice is a high-pitched and repeated “cuip”.

Biology –
The biological cycle of Himantopus himantopus begins with the mating which, in the period of April, is preceded by the courtship of the male to the female with not very complicated but elegant dances. In this phase, before mating, the female stands with her head facing downwards, while the male turns around pecking the water and the feathers of her chest.
The knight of Italy, after mating, nests on the banks of brackish lakes and wetlands, building a nest, with twigs and clay, in the middle of the water of a swamp or a depression dug with its legs on a sandbank or on a small island, among the salicornie.
The female lays 3-4 yellow-green eggs, stained with dark brown, in the period between late April and early June.
Incubation of the eggs lasts 25-26 days and the breeding of the offspring, which lasts about a month, is carried out by both parents.
The young leave the nest very early, learning to fly about a month after hatching.
These birds often nest in small groups, sometimes together with avocets or terns.
In case of danger, due to the presence of nest predators, the females, in the same way as avocets, simulate having a broken wing, explaining it and making a lot of noise to make themselves heard. In this way, the predator will attempt, instinctively, to attack the “injured” bird, leaving the nest alone.

Ecological role –
The Black-winged stilt is a migratory bird that winters in African countries and in the spring returns to nest in many wetlands of Italy where it finds islets suitable for the construction of nests. The migration takes place in April-May and July-September.
This bird feeds mainly on insects, but also small molluscs, worms, crustaceans and even tadpoles.
It collects its food directly from sand and water; to hunt it uses sight and touch: in fact, it moves its beak in the water intercepting its prey. He is able to hunt even at night, since he can see well even in the dark.
According to the IUCN, the main threats to this species are represented by the transformation of the nesting and feeding habitat.
This species, at the beginning of the eighties was very at risk, but in the following decades, thanks also to the European directives, the population has greatly increased, thanks to the protection of the wetlands where the Himantopus himantopus reproduces and thanks also to the protection in the countries where it winters in winter.
In this regard, among the protective measures, it should be remembered that in addition to the Birds Directive (79/409 / EEC) it is a species subject to protection according to Article 2 of Law 157/92 of the Italian State.
Currently the general population seems stable, even if some (like the European one) are clearly increasing in number and also enlarge their range, a fact perhaps linked to global warming which allows them to colonize areas that were colder. In addition, they seem to have become less fearful of humans, so much so that more and more cases of nesting have been recorded in anthropic environments such as salt marshes, rice fields and even tanks of farms, as well as sightings of individuals in the city ponds.