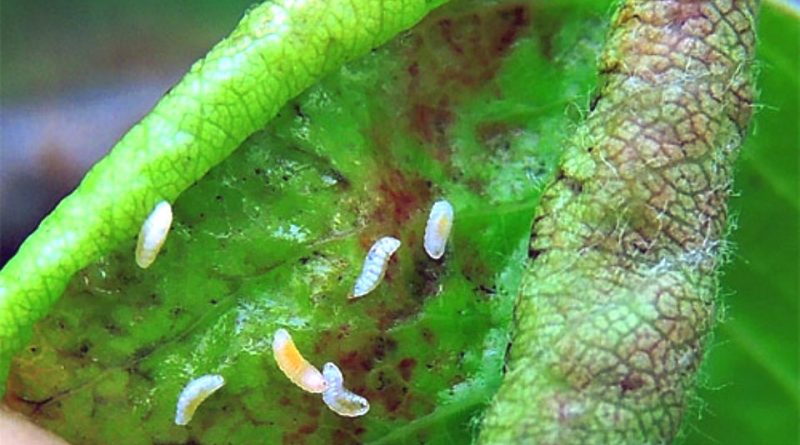 The pear leaf midge (Dasineura pyri Bouché, 1847) is a small insect belonging to the Cecidomyiidae family.

Geographical Distribution and Habitat –
The pear leaf midge is a European species, present both in Europe and in North America where it lives mainly on the leaves of the trees of the Pyrus genus.

Morphology –
Dasineura pyri is recognized as adults have a size of 2-3 black – brownish in color.
The female is recognized in that the ovipositor can stretch considerably and reach the length of the body.
The larvae, white-yellowish in color, variable with age, are about 2 mm long and have a sharp body at the ends, pronounced transverse segmentation, highly developed sternal spatula; they are also apode.
The eggs are reddish.

Aptitude and biological cycle –
The pear leaf midge overwinters pupa in the soil.
Arrived in early spring, this resumes activity with adults who flicker already from the second and third ten days of March until April, they mate and lay eggs on the same day of the exit.
The females carry out the first oviposition on the leaflets of the young shoots, when these are still partially closed; as soon as they emerge, the young larvae begin their activity causing a typical rolling.
These larvae that are active in April, once the larval cycle is finished, pupate, always in the ground, to give rise, during the year, to other 4-5 generations.
The larvae feed on the sap of the leaves by entering their saliva into them.
Saliva contains substances similar to auxins (substances that regulate plant growth).
In this way Dasineura pyri turns 3-6 generations per year.
The life of adults is very short, the number of eggs laid at a time is around 30; these have an evolution before hatching of 3 – 4 days and the larvae have a development duration between 10 and 12 days.

Ecological role –
The pear leaf midge, with its larval activity, causes a blackening of the infested leaves which, in addition to rolling up on themselves, subsequently dry out and soon fall from the tree; the leaves of the shoots are particularly affected. Massive infestations of this insect can cause major damage especially to plants grown in the nursery.
The most harmful in this sense are the second and third generations as they appear at the time when the vigor of the shoots and the formation of the young leaves is most intense.
The interventions of containment of this insect had to be carefully evaluated as the chemical fight against the Dasineura pyri is almost never justified for the scarce damages caused. In case of high infestations, especially on young plants in breeding where the cimal can be compromised, specific interventions can be carried out.
In this regard, it should be remembered that the larvae of some Cecidomidae are an important nutrient substrate for Anthocoridae, especially to encourage their development and multiplication. In the case of chemical treatments, these phytophages would be considerably limited in favor of the pear leaf cecidomy.