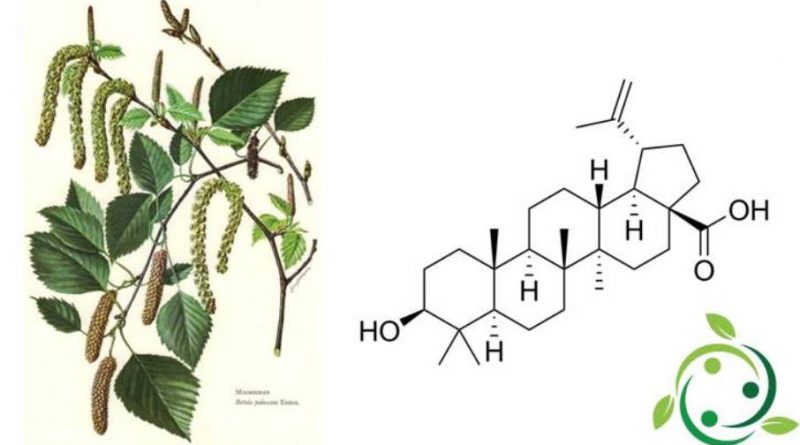 Betulinic acid whose term in the IUPAC official nomenclature is: Acid (3β) -3-hydroxy-lup-20 (29) -en-28-oic is a carboxylic acid having a brute or molecular formula C30H48O3.
Betulinic acid is present, in nature, in the bark of some plants such as Betula pubescens.
Betulinic acid is therefore a natural pentacyclic triterpenoid that has antiretroviral, anti-malarial and anti-inflammatory properties, as well as activities, recently discovered, as an anti-tumor agent, through the inhibition of topoisomerase.
It has been discovered that the effects of betulinic acid as an anticancer agent in breast cancer depend on the cannabinoid receptor. Betulinic acid acts like a CB1 antagonist and a CB2 agonist.

In addition to the white birch (Betula pubescens), from which it takes its name, this substance is also found in other plants such as: Ziziphus mauritiana, Prunella vulgaris, Triphyophyllum peltatum, Ancistrocladus heyneanus, Diospyros leucomelas, Tetracera boiviniana, Syzygium formosanydea, Pulsatilla chinensis.
Research on the effects of betulinic acid is obviously underway to evaluate all possible effects, not only as a selective inhibitor of human melanoma, but also for other applications such as in human leukemia cells HL-60, malignant cell carcinoma tumor lines scaly head and neck SCC25 and SCC9 and others.