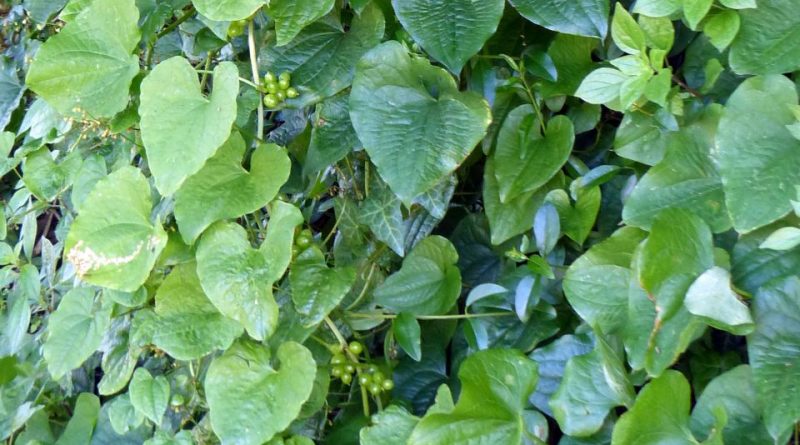 Systematic –
From a systematic point of view, it belongs to the Eukaryota Domain, Plantae Kingdom, Magnoliophyta Division, Liliopsida Class, Liliales Order, Dioscoreaceae Family and therefore to the Genus Dioscorea and to the Specie D. communis.
The term Tamus communis L. is synonymous.

Etymology –
The term Dioscorea of ​​the genus was dedicated to Pedanio Dioscoride Anazarbeo (of Anazarbo Asia Minor), physician of Greek culture, botanist and pharmacist, who lived in the first century AD.
The specific epithet communis comes from common, banal.

Geographical Distribution and Habitat –
The Black bryony is a species that grows spontaneously and widespread in an area that includes Europe, North Africa and western Asia.
Its habitat is that of the undergrowth, generally in dense woods and dense spots, but it can also be found in the clearings and hedges, where it grows from sea level to mountain areas, generally between 0 ÷ 800 m s.l.m. and in Sicily up to 1,400 m. 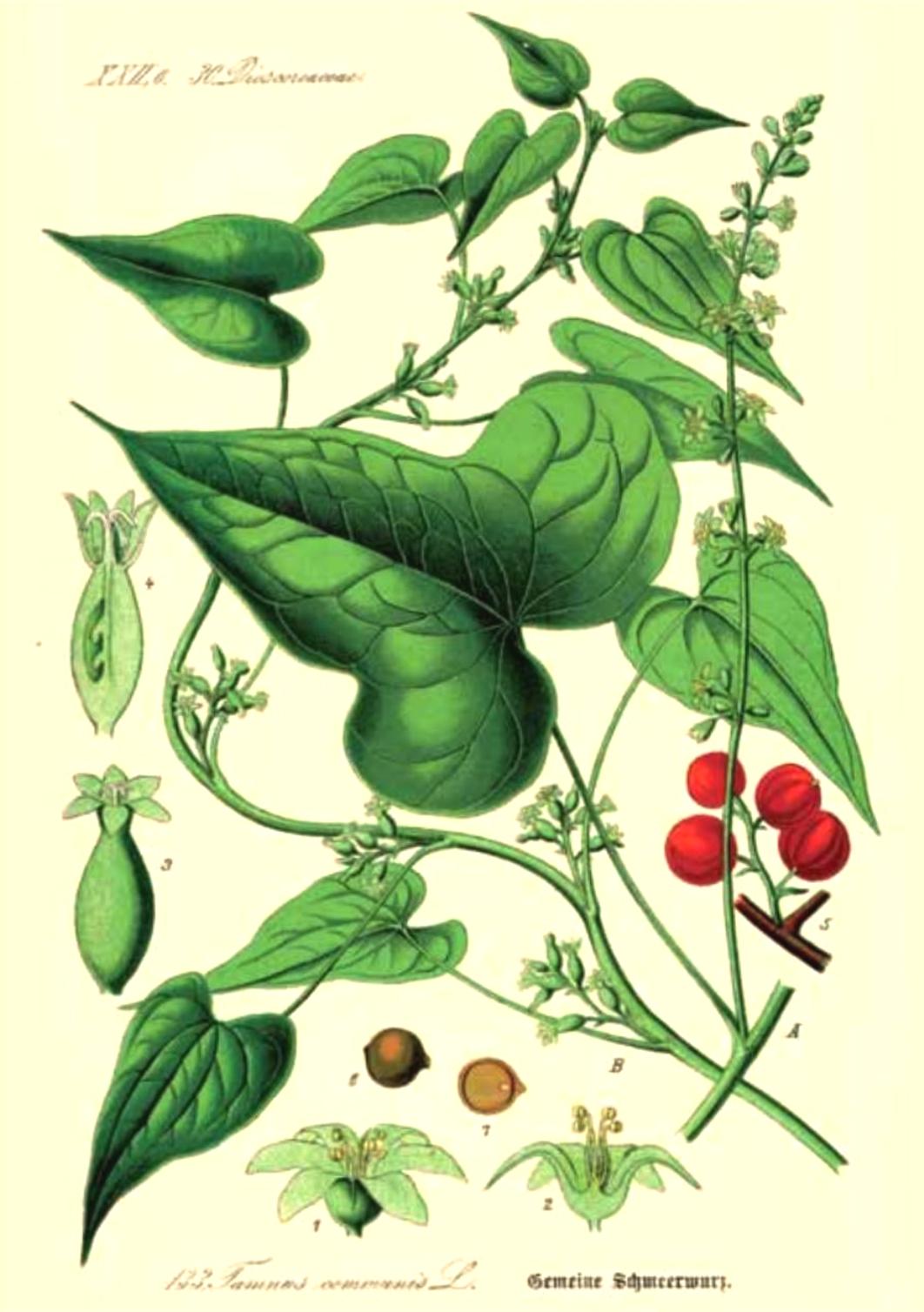 Description –
Dioscorea communis is a perennial herbaceous plant that has a tuberous, climbing and enveloping root. The stems are slender and flexible, falling downwards, hairless, dark green in color tending to reddish brown.
The male branches scattered with minute leaf bracts, the thinner female ones, have petiolate leaves. The height is 1 ÷ 4 m.
The leaves are long petiolate, alternate, cordate, heart-shaped, sharp at the apex of a bright green color.
The unisexual flowers are gathered in elongated axillary racemes, the male ones have 6 stamens, solitary flowers or in bundles of 2 ÷ 3 elements, the female ones in short racemes 3 ÷ 5 elements, have inferior ovary, 1 stylus, 3 bilobed stigmas. The pale green perigonium, with 6 lacinias campanulate licenses.
The antesis is between April and May.
The fruit is a globular berry with a diameter of 8.5-11 mm, red when ripe, carried by a pedicel of 6 mm, with 1-6 globular seeds of about 3 mm, smooth or slightly wrinkled, brownish, with evident rafe.

Cultivation –
The Black bryony is a widely spread plant, spontaneous, but not cultivated, which grows in a particular habitat and in the presence of vegetation where it sustains and grows.

Uses and Traditions –
This plant with its bearing resembles the vine, while the young shoots remember the shoot of the Asparagus officinalis.
This explains the various names in the vernacular language, in general, refer to the vine or asparagus.
For the less experienced it can be confused, in the era of fruiting, with plants of the genus Bryonia, which have similar fruits, but often rampant by means of cirrus, 5-lobed flowers and opaque leaves, lobed palmate.
The shoots, on the other hand, can be confused with the shoots of Calystegia sylvatica (Kit.) Griseb. Villucchio, non-food plant.
It should be emphasized that in the juvenile stage the shoots of the two plants are very similar, the right-hand twisting in the Tamaro distinguishes them, while it is mostly left-handed for the Vilucchio; at maturity the plants do not present confusion problems.
This plant contains some constituents including: calcium and potassium oxalate, saponins, tannins and a substance similar to histamine.
It is a hemolytic, anti-echymotic, diuretic, emetic plant.
In the past, Dioscorea communis was used in the treatment of alopecia, rheumatism and bruises, berries were used in the treatment of chilblains.
Nowadays only the root, rich in potassium oxalate, is used to facilitate the reabsorption of the bruises.
Young shoots, preferably those produced by male plants, as they are larger, can be used cooked as asparagus, in omelettes and soups, but have a bitter-salty taste.
Be careful because the fruits, acrid and caustic, are the cause of even serious poisonings, which manifest themselves with severe burning in the mouth, irritation of the intestinal mucous membranes, persistent vomiting and diarrhea, difficulty in breathing, increase in body temperature.
In France Tamaro is known as “Herbe aux femmes battues”, that is “herb for beaten women”. This curious name comes from the therapeutic use of the grated pulp of the root applied as a compress on bruises, hematomas and sprains.

Method of Preparation –
Black bryony can be used in the kitchen; its young shoots can be consumed like asparagus shoots (in some regions of the north east they share the name of “bruscandoli” with the sprout of hops).
At the pharmaceutical level, the real drug is the root, used in the past in the popular pharmacopoeia for the treatment of chilblains and rheumatism and as a laxative. It has emetic, rubefacent, purgative properties. For its rubefacent and stimulating properties, it can also be useful as a scalp reinforcer. The characteristics of the active ingredients strongly advise against uncontrolled use, even externally, as it can lead to serious side effects (allergic reactions, vomiting, diarrhea).