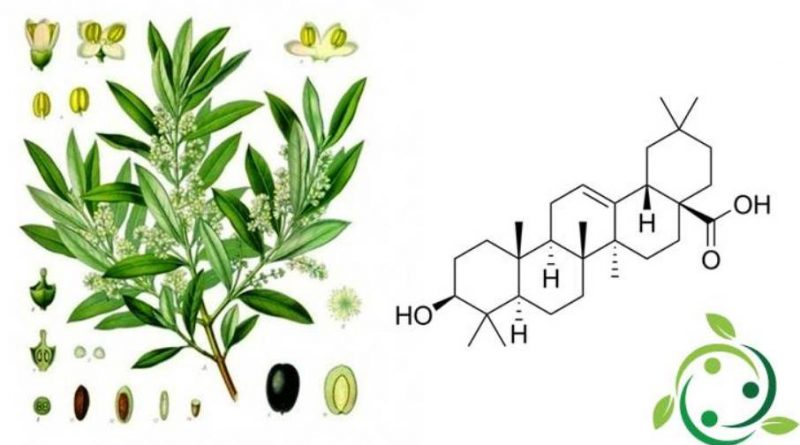 Oleanolic acid, whose name in the official IUPAC nomenclature is: (4aS, 6AR, 6AS, 6br, 8aR, 10S, 12aR, 14bS) -10-hydroxy-2,2,6a, 6b, 9,9,12a- heptamethyl-1,3,4,5,6,6a, acid 7,8,8a, 10,11,12,13,14b-tetradecaidropicene-4a-carboxylic acid, is a cyclic triterpene carboxylic acid penta cyclic with brute or molecular formula: C30H48O3.
Oleanolic acid occurs naturally in some plants such as Allium spp., Phytolacca americana, Prunella vulgaris, Origanum majorana, Olea europaea, Rosa woodsii, Prosopis glandulosa, Phoradendron juniperinum, Syzygium claviflorum, Hyptis capitata, Mirabilis jalapa and Ternstroemia gym. other plants.
Oleanolic acid is found in olive oil and is relatively non-toxic, hepatoprotective and has anticancer and antiviral properties.
In addition, oleanolic acid has been found to exhibit weak anti-HIV and weak anti-HCV activities in vitro, but more potent synthetic analogues are being studied as potential drugs.
The oleanolic acid contained in the olive leaves also appears to have great therapeutic potential for diseases such as multiple sclerosis.

This is what emerged from a study by the Instituto de Biologi’a y Gene’tica Molecular (IBGM) in Valladolid, published in the British Journal of Pharmacology.
With this active ingredient some pathologies seem to progress more slowly. For the study, animal models with multiple sclerosis and experimental autoimmune encephalomyelitis (EAE), a disease of the central nervous system, were used.
Disease development has been shown to be considerably slower in animals when they are given the active substance and in some cases they have been able to significantly reduce and even eliminate all inflammatory processes associated with the disease.
Oleanolic acid seems to be able to significantly attenuate clinical signs (muscle control, weight, survival) and immuno-inflammatory changes (vascular impermeability, leukocyte infiltration, presence of cytokines) of experimental autoimmune encephalomyelitis.