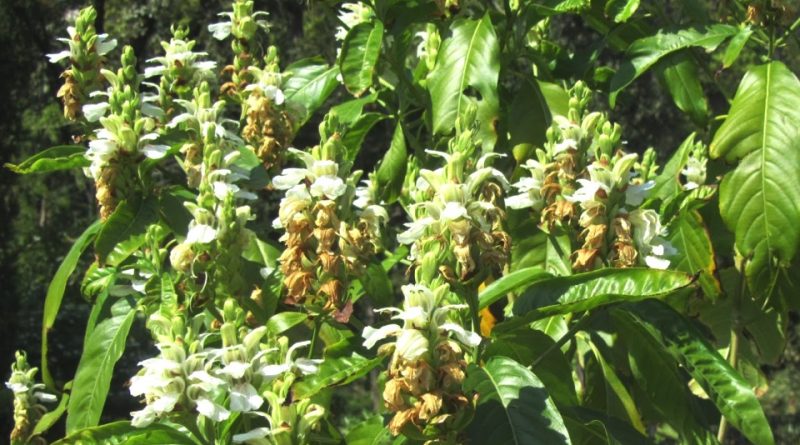 Etymology –
The term Justicia was dedicated in memory of the Scottish farmer Giacomo Justice who wrote the Scottish Gardener in 1754 and the English Gardener in 1767.
The specific epithet adhatoda is the Latinized form of adathodai, a native Indian or Sri Lankan name of this plant, made up of ada goat and thodai do not touch: avoided by goats.

Geographical Distribution and Habitat –
Malabar nut is a plant native to the Asian continent where it grows spontaneously and in abundance throughout Nepal, India and the Pakistan region of Pothohar, in particular in the Pharwala area and also grows in China, Sri Lanka, Vietnam , in Indonesia (Java) and Malaysia.
In addition, this plant is widespread and cultivated in some areas with a suitable climate in America.
Its habitat is that of tropical wetlands where it grows in moist soils and in areas with the presence of trees that protect it from direct sunlight; it grows from sea level up to 1300 m. s.l.m. in Pakistan. 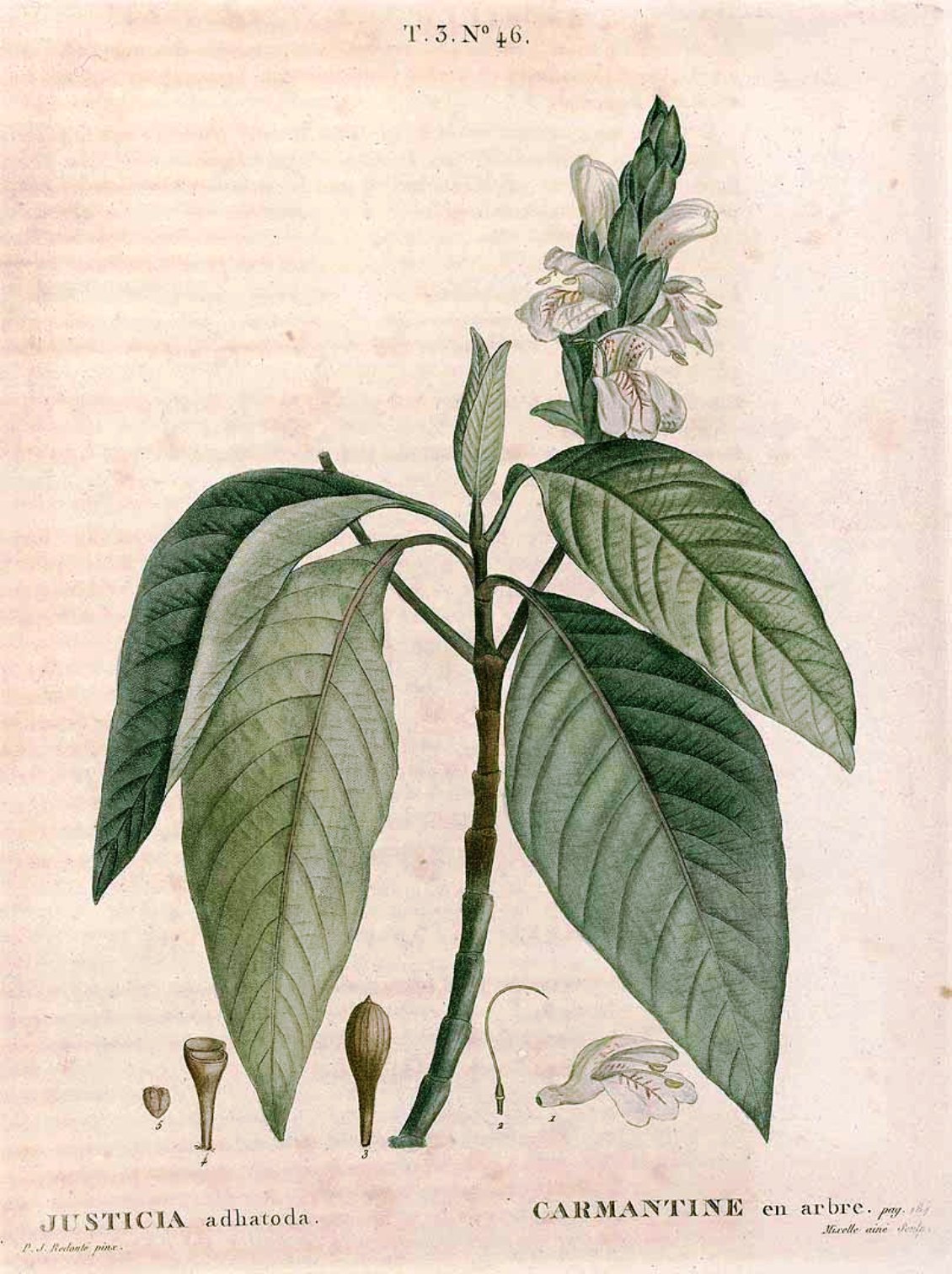 Description –
Justicia adhatoda is an evergreen shrub plant with branched branches that grows to a height of 2-2.5 meters.
The leaves are lanceolate in shape, 10-15 centimeters long and 4 centimeters wide; they are arranged in an opposite way, have rounded edges and short stalks. Once dried, these take on an opaque brown-green color and if ingested they have a bitter taste.
The flowers are white in color, about 3 cm long, almost sessile, in the terminal and axillary peaks, up to 10 cm long and 2,5–3 cm wide; the green leaf bracts are oriented in a broad-elliptical direction of 1.5-2.5 x (0.8) 1-1.5 (-1.8) cm, pubescent; the bracts are elliptical-oblong and lanceolate, 1-1.5 (-2) x 0.3-0.5 cm, acute, minutely pubescent.
The calyx has 5 lobes, linear-lanceolate lobes, 6-10 x about 2 mm, acute, puberulous, embryonic. The corolla is pale-white in color, tube 1.2-1.5 cm long, outside pubescent, hairy throat, limbs 2-lips, upper lip erect, slightly bifid, galeate, lower lip with 3 elliptical, obtuse lobes.
There are two stamens with filaments 1-1.5 cm long, oblong anthers, apical basal. The ovary is oblong about 3 mm long and 2-2.5 cm long in style. The capsules are stiped, broadly clavate of about 2.5 centimeters in length, 4 seeded, pubescent.
The antesis occurs between November and April in the lower areas and July-October in hilly areas.
The seeds are 2–3 mm orbicular and hairless.

Cultivation –
Malabar nut is a plant that can also grow in climates with mild winters (such as some areas of southern Italy) with minimum temperatures that rarely drop below 0 ° C, although it can even hold a few degrees less, for a short time.
The ideal exposure is quite shady, with the ideal location at the base of large trees, so that it can be affected only by the rays filtered by the foliage above. If exposed to the midday sun, the leaves can suffer damage, burns and sag.
Unlike most shade-loving plants, Justicia adhatoda is quite resistant to summer drought, also because, in native places, the rains are governed by monsoons, whose alternation means that there are long periods of drought.
The ideal substrate is humid, without stagnation, rich in organic, fertile and with a pH that can vary from neutral to slightly alkaline (pH 7-8); moreover the species has a fair tolerance to soil salinity.
For the management of this plant it is necessary to intervene with periodic fertilizations and pruning of thinning of the shrub, to be carried out at the end of winter to allow a thicker and more orderly growth.

Uses and Traditions –
Justicia adhatoda is an officinal plant that boasts a number of traditional medicinal uses.
The knowledge of the properties of this species dates back to around 3000 years ago, when it was used for the treatment of tuberculosis, in respiratory infections in general and in asthma; in addition, it was used to improve bronchodilatation and expectoration. In addition, modern medicine uses the ingredients of this plant also against hay fever.
Its leaves contain various alkaloids, among which the most important is Vasicine, from which Bromhexine and an alkaloid, quinazoline, are also responsible for the medicinal activity of the plant.
As for the presence of vasicine in the plant, it was measured equal to 0.541 – 1.1% in dry weight.
Vasicine has been compared to theophylline both in vitro and in vivo. Another active ingredient, vasicinone, has shown in vitro bronchodilator activity but broncho-constricting activity in vivo; both alkaloids in combination, in a 1: 1 ratio, showed marked bronchodilator activity both in vivo and in vitro.
Furthermore, vasicine also shows a strong activity stimulating the respiratory system (analectic) and has moderate hypotensive activity; while vasicinone is devoid of these activities.
Clinical studies of a commercial drug containing vasicinone and vasicinone have not revealed any side effects during the treatment of bronchial asthma.
It should also be noted that the presence of the two active ingredients varies according to the harvesting period of the plant.
Extracted from these leaves, they are used therapeutically in diseases related to the respiratory system (cough, sore throat, phlegm etc.).
The active ingredients present in this extract have a mucolytic function, dilate the bronchi and also, in case of allergies, also have an antihistamine effect; finally they slow down the growth of Mycobacterium tuberculosis.
In general, the plant has anti-inflammatory, analgesic, expectorant, diuretic, anti-asthma, abortive, antiseptic and antiprotozoan and insecticidal properties, as well as sedative and antispasmodic action.
Its natural extract acts in a wide range of allergic conditions and is also effective against excessive bleeding from epistaxis, it is used against hepatitis, fever in general and eye diseases (glaucoma).
This plant is also used in homeopathic medicine where the remedy is made up of leaves and is used for hay fever.
Recent studies, carried out in 2011, have found that two active ingredients, contained in the plant, inhibit the growth of staphylococcus, streptococcus, diphtheria bacillus and tuberculosis bacillus, and also protozoan infections; this thanks to the compounds: vasicine acetate and 2-acetyl benzylamine present in the plant extract obtained by distillation with hexane, with ethyl acetate and methanol.
Other useful applications, of the extracts of this plant, are found in peptic ulcer hemorrhages, in hemorrhoids, in menorrhagia, as well as with topical application in bleeding gums (pyorrhea).
Finally, experimental studies show that extracts of Justicia adhatoda are able to protect cells from radiation damage.
A last interesting use is related to the possibility of obtaining insecticides from the extracts of the leaves.

Method of Preparation –
Malabar nut is part of medicinal plants with multiple uses and applications. Obviously the preparation of extracts, especially for medicinal and curative use, must be carried out by personnel with medical and pharmacological skills.