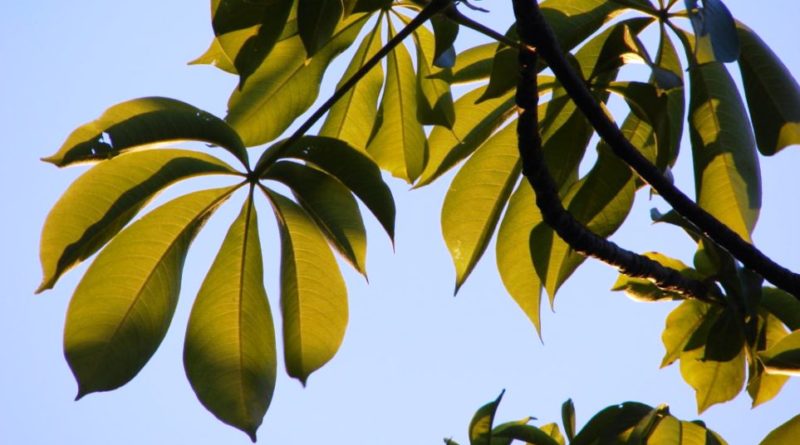 The Baobab (Adansonia digitata L.) is an arboreal species belonging to the Bombacaceae family.

Systematic –
From a systematic point of view, it belongs to the Eukaryota Domain, the Plantae Kingdom, the Magnoliophyta Division, the Magnoliopsida Class, the Malvales Order, the Bombacaceae Family and therefore to the Genus Adansonia and to the Species A. digitata.

Etymology –
The term Adansonia of the genus was dedicated by Linnaeus to the French naturalist, botanist and explorer of Scottish origin, Michel Adanson (1727-1806) who discovered the baobab in Senegal in around 1750.
The specific epithet typed derives from dígitus finger: with parts that look like fingers.

Geographical Distribution and Habitat –
The Baobab is a large tree, native to the semi-arid part of sub-Saharan Africa and is widespread in most of Africa, especially in that of origin, where it emerges, for its grandeur constituting landscape formations in association with typical plants of the areas where it grows. 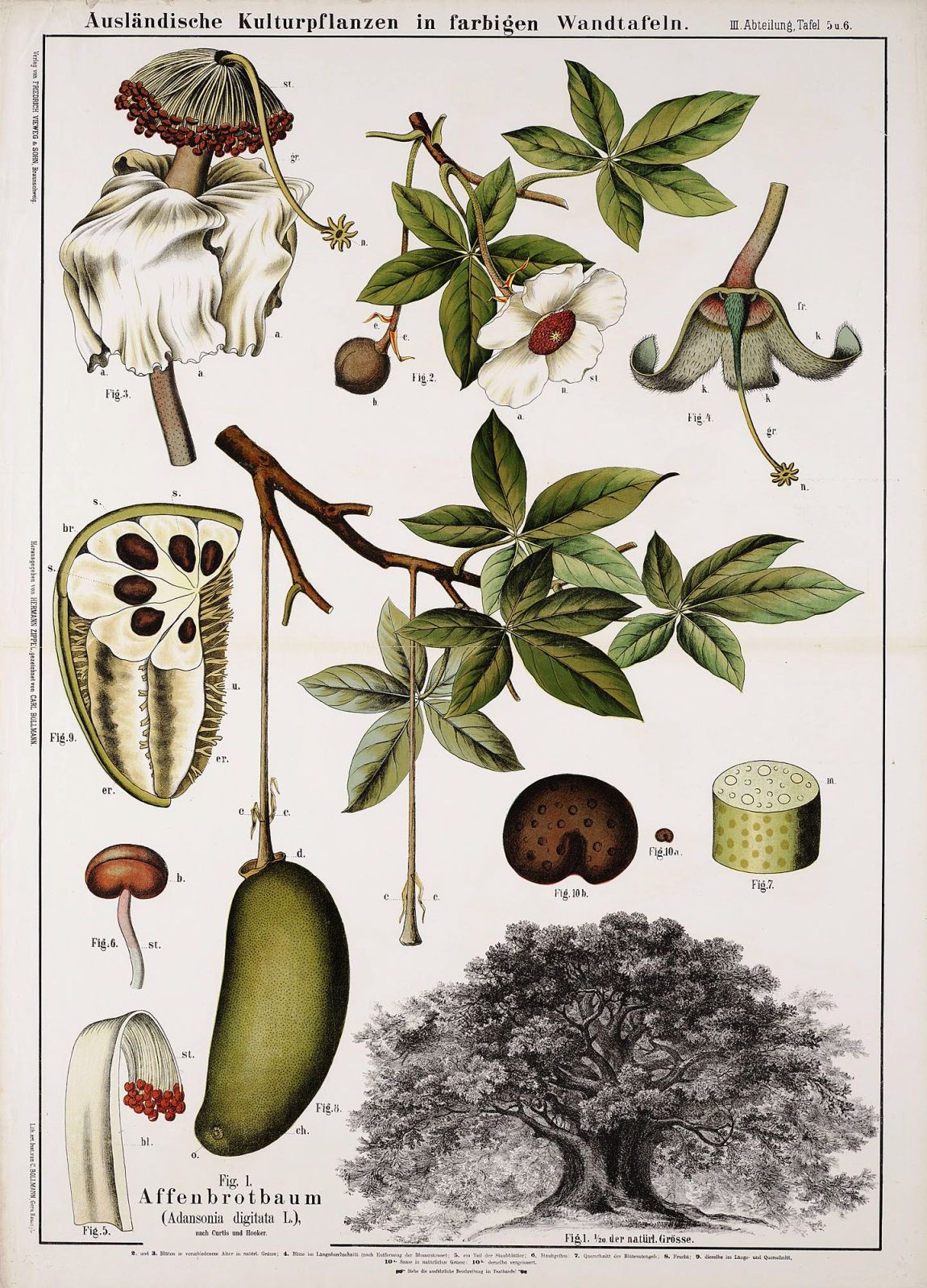 Description –
Adansonia digitata is a large deciduous tree characterized by a swollen trunk, which can reach 25 m in height, with a diameter of 3-10 m; the bark is smooth, varying in color from brownish-red to grayish and up to 10 cm thick.
The leaves are alternate, typed (hence the specific name) with 3-9 digits which are 5-15 long and 3-7 cm wide, dark green in color and with full margins.
The flowers are bisexual, actinomorphic, with a diameter of up to 20 cm; these have a deeply lobed calyx and petals of waxy consistency, whitish in color; the stamens, which are very numerous, form a central bow; the ovary is exceeded, with 5-10 concamerations. Flowering begins at dusk and after just 24 hours the flowers wilt taking on a brown color.
The fruit, which varies in shape from globose to ovoid, is 12 cm or more long and consists of a woody epicarp, covered with a greenish-yellow fluff, and a pulpy endocarp, divided by fibrous filaments into 5- 10 cloves, in which the seeds are contained.

Cultivation –
The Baobab is a tree that is grown in sunny places and can also withstand temperatures just below freezing, but for very short periods, and only if in a completely dry place.
The plant needs a loose and very well drained soil, not too rich in organic matter; ideal soil can be prepared by mixing two parts of lapillus, one part of sand and one part of balanced soil.
Being a plant native to warm climates, it cannot be thought that at more northern latitudes these species give great results but with some precautions also the baobabs can be successfully cultivated, partly inside the houses or in the greenhouse and partly at the external.
As far as watering is concerned, these plants need to be watered only during the vegetative period, from March to October, always waiting for the soil to be perfectly dry between one watering and another. During the cold months you avoid watering, leaving the soil completely dry, especially if the plant is placed in an unheated place.
As far as the warm months are concerned, this plant does not however require particular attention as regards irrigation, as it originates from extremely arid climates with rainfall limited to intense occasional events.
The multiplication of the baobab occurs by seed, in the spring; baobab seeds generally germinate after remaining on the ground for months, or sometimes even after the fruits have been digested by animals, it is therefore necessary to encourage germination by placing the seeds in hot water for at least 24 hours before sowing. In addition, germination can also be promoted by using a file, with which to slightly thin the rigid cuticle that covers the seeds. however the baobabs also propagate by cutting.
It should be remembered that pollination is carried out by different species of bats. Among the species whose involvement has been demonstrated are Eidolon helvum, Epomophorus gambianus and Rousettus aegyptiacus. A minor role seems to play some nocturnal primates such as Galago senegalensis and Otolemur crassicaudatus and some nocturnal butterflies such as Heliothis armigera, Diparopsis castanea and Earias biplaga.

Uses and Traditions –
Adansonia digitata is a legendary tree for its exceptional longevity and for the considerable size that the trunk, rich in ramifications, can reach.
This plant, which is widespread, as mentioned, in much of Africa, is called by the Africans “Magic Tree”, “Pharmacist Tree” and “Tree of Life”, the name Baobab derives from the Arabic name “bu-hibab”, (the fruit with multiple seeds). For African peoples, the Baobab is food, medicine and a sacred place so much that only the wise can climb its branches.
The pulp, extracted from the shell of its fruits, is very rich in fiber, vitamins, minerals and amino acids, especially B vitamins and PP vitamin, essential for the development of the body. The vitamin C content is significant. This quantity is considerable and is six times greater than that of an orange. The intake of about 5 grams per day of fruit powder is useful to maintain the state of well-being of the body, as it regulates the intestine, blood sugar and blood cholesterol values, gives strength, energy and resistance, rebalances the tone mood and relieves menstrual disorders, it is also anti-anemic, anti-febrifuge and anti-inflammatory.
A study has recently been carried out at the Faculty of Pharmacy of the University of Ferrara on the antioxidant capacity of products deriving from the fruit of the Baobab in comparison with other fruits and vegetable extracts and it emerged that the pulp of the baobab compared to other products deriving from natural sources such as strawberry, kiwi, orange, and apple has a higher antioxidant activity.
Among the uses of this plant it is recalled that the fruits, leaves and flowers are an important nutritional resource for their content in vitamin C. The seeds are rich in proteins and are used for the extraction of an oil for food use.
The bark fibers are used to make ropes, baskets, clothing, hats.
Various parts of the plant are used in folk medicine: the powdered bark and roots are used as a remedy for malaria; fruit pulp mixed with honey is used against coughs; the leaves are used to treat diarrhea and fevers. For these virtues, the plant is the object of veneration among many African populations.

Method of Preparation –
The Baobab is undoubtedly one of those plants of which everything is used; with young leaves, used fresh, an excellent vegetable is obtained, while, once dried, they can be used as ingredients for condiments and sauces.
The pulp of the fruits, floury and white, mixed with water is a very refreshing and rich in vitamins drink.
Young seedlings and their roots are eaten like asparagus.
With the bark of the young baobabs, ropes, baskets, rugs or other woven objects are made.
The seeds of the fruit contain oil and protein and, reduced in flour, are used for feeding children.
The baobab wood, which contains a lot of water, can be chewed in case of drought, by men and animals, to calm thirst.
From the roots a red dye is obtained, widely used.
There are numerous uses for therapeutic purposes: the decoction of leaves calms intestinal infections, dysentery, colic, asthma.
A bark decoction is used against rickets.
The fruit pulp can be used against children’s diarrhea and to strengthen their growth.