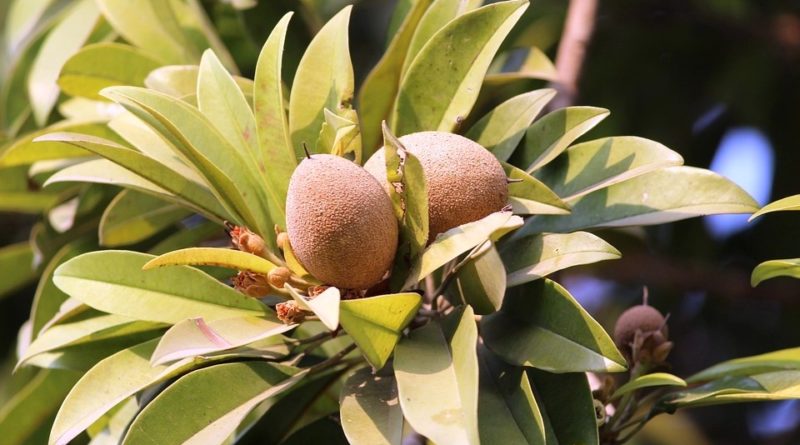 Systematic –
From a systematic point of view, it belongs to the Eukaryota Domain, Plantae Kingdom, Tracheobionta Subregion, Magnoliophyta Division, Magnoliopsida Class, Ebenales Order, Sapotaceae Family and therefore to the Manilkara Genus and the M. zapota Species.
The term Achras sapota L. is synonymous.

Etymology –
The term Manilkara of the genus comes from manil-kara, a vulgar name of the other species Manilkara kauki in Malayalam which is the southern Dravidian language spoken in India.
The specific epithet zapota comes from the Mexican vernacular name zapotl, derived from the Nahuati language, a graphic variant of sapota.

Geographical Distribution and Habitat –
Sapodilla is a plant native to Southern Mexico, Guatemala and the West Indies in particular. In Yucatán it is one of the dominant tree species.
Its natural habitat is that of forests, where it grows spontaneously.
From the places of origin, the Spanish colonists brought a variety to Manila, hence the name Manilkara. From the Philippines, the fruit subsequently became popular throughout Southeast Asia and India, where it is considered to be an autochthonous species. 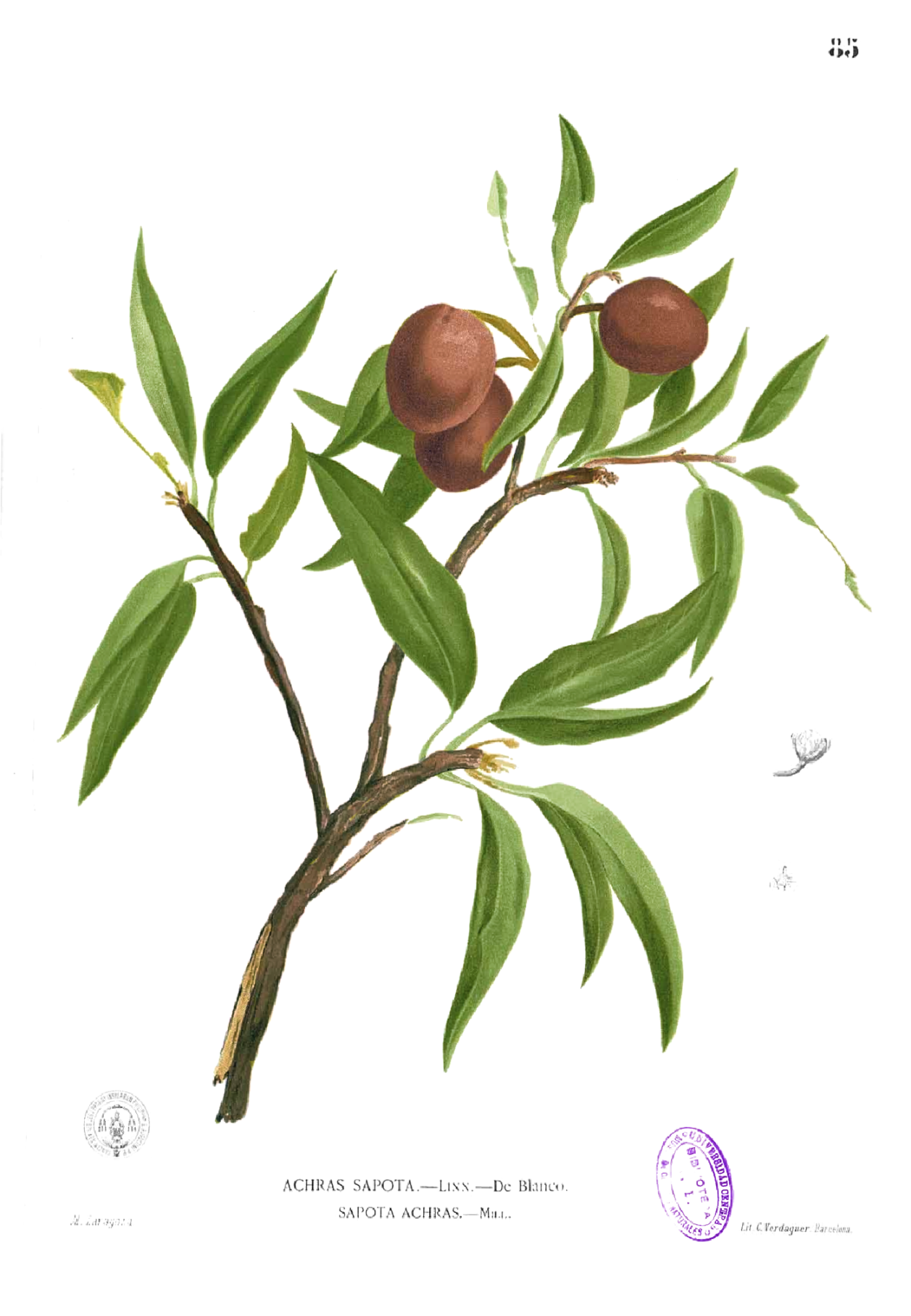 Description –
Manilkara zapota is an evergreen tree, with a conical crown, which can grow up to 30 meters in height.
The trunk is grayish in color and the bark cracks as the plant ages.
The young branches are instead covered by a woolly layer.
A white latex is obtained from the plant.
It has alternate elliptical or oval leaves with a full margin of 7-15 cm in length.
The flowers are bisexual, white in color, somewhat fragrant and solitary. They consist of six free sepals enclosed outside in two spirals; the petals are united in a tubular corolla with six lobes, above the ovary with a single stamen. The flowers remain open all night.
The pollination period, which is mainly for self-pollination, is the spring period.
The fruit is a large berry, brown in color, round or slightly oblong in shape, with a diameter of 4–8 cm and a thin skin. Inside we find a sweet and delicate pulp, which tastes of caramel, pear and honey.
Inside the fruits there are two to five seeds, black in color, hard and elongated.

Cultivation –
Manilkara zapota is a species with different cultivars spread in the tropical areas of America, Africa and Asia that can be found in the major markets around the world.
It is grown in countries with hot and humid climates.
It is a slow growing plant in the early years.
Its cultivation has needs similar to those of other sub-tropical plants. It tolerates alkaline soils very well, although it needs good drainage and is sensitive to brackish water but its water needs are medium-high; it also does not bear temperatures below 0º C.
In countries where it is grown commercially, the sixth in a 5 x 5 m framework is often used.
As far as the pruning technique is concerned, it is necessary to clean the dry branches throughout the year and to prune them around 2-3 years.
The varieties include:
– Great Dane, Hasya, Makok, Molix, Morena, Tikal and Silas Woods.

Uses and Traditions –
Sapodilla is cultivated for the chicle (traditional ingredient of chewing gum), which is extracted from its stem, for the precious wood, for its fruit and for its medicinal properties.
In Mexico it is marketed as “chupeta” or “chicozapote”. The latter name derives from the Nahuatl language and means honey zapote, indicating the sweeter taste of the other fruits of the Sapotaceae family. By the Mayans of Yucatan it is instead called “zaya”. Other traditional names, from other areas, are “zapote chico”, “chicu”, “àcana”, “korob”, “muy”, “muyozapot”, as well as, more generally, as “níspero” (which, however, more properly indicates in Spanish the European medlar species (medlar in winter).
After the conquest of Mexico, this plant was imported to every corner of the Spanish Empire and, from the Philippines, it managed to reach India, where it found a particularly favorable range for its development.
This plant has been used since ancient times in China as an anti-diarrheal remedy, thanks to the astringent power of tannins. The pulp also has high glucose, fructose and sucrose contents, as well as ascorbic acid, vitamins A and C, minerals such as potassium, iron, calcium, phosphorus and copper. This composition in fact gives it a strong antioxidant power and helps fortify the immune system. It seems that the seeds have a mild sedative power.
In addition to the aforementioned commercial uses, Manilkara zapota has scientifically proven healing properties.
Among these we remember, properties:
– antioxidants;
– anti-inflammatory;
– anti-diabetic;
– antiviral;
– antibacterial;
– enhancer of the immune system.
The tannins contained in this plant are proanthocyanidins, ideal for fighting diabetes, bad cholesterol, diarrhea and dysentery, lung disorders, colds.
At the food level, the sapodilla fruit is generally eaten fresh.
This has become famous for its characteristic aroma and is used for sorbets, cocktails, jams and ice creams, as well as in the preparation of cakes, syrups and sauces; fermented gives flavor to wine and vinegar.
In Indonesia, young shoots are also eaten raw or cooked with rice.
Due to its medicinal properties, it also finds numerous applications in folk medicine in Asian countries. In Java, the flowers reduced to powder with other ingredients are spread on the belly of women immediately after childbirth. In Malaysia the seeds are used to prevent fever, or as a diuretic. Unripe fruits and bark are mainly used in China as an effective remedy for diarrhea.
Historically, as mentioned, the latex of the plant (like that of the Manilkara chicle affine) is used as a chewing (chicle), constituting the valuable base ingredient of chewing gum. Today, however, the common industrial production of chewing gum is based on synthetic products.
Latex is also used in the production of toothpastes, to produce quality rubbers, in transmission belts and for the insulation of electrical conductors.
Wood is used for the production of furniture.

Method of Preparation –
The fruit of Manilkara zapota is generally eaten raw to make fruit salads or creams but can also be used after cooking in jams and sweet sauces.
In Florida and in the south of the United States, where very extensive historical crops exist, it is used as the main ingredient of some sweets and other pastry recipes. In countries such as Indonesia, Malaysia and the Philippines it can happen to find it cut into slices and fried in coconut oil on the streets of cities and villages.
The flowers and bark are dried and ground, the leaves used for infusions and natural remedies that bring the innumerable properties of this plant.
The wood of the tree, as mentioned, is used for the manufacture of furniture and the fruit latex is the basis for many rubber-like materials.