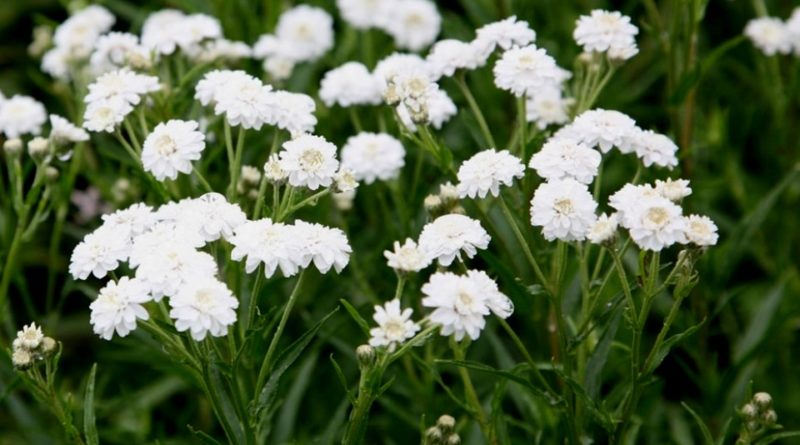 The Sneezewort (Achillea ptarmica L., 1753), is a herbaceous species belonging to the Asteraceae family.

Systematic –
From a systematic point of view, it belongs to the Eukaryota Domain, the Plantae Kingdom, the Spermatophyta Superdivision, the Magnoliophyta Division, the Magnoliopsida Class, the Asteridae Subclass, the Asterales Order, the Asteraceae Family, the Asteroidea Subfamily, the Anthemideae Tribe, the Achilleinae Subtribe and therefore to the Genus Achillea and the Species A.
The term is synonymous: Ptarmica vulgaris DC.

Etymology –
The term Achillea of ​​the genus was dedicated to Achilles (in Greek Aχιλλειοϛ Achilleios), mythical Greek hero who would have used some species of this genus to heal the wounds suffered in battle by his soldiers; a very ancient remedy so that this is one of the medicinal herbs found in an Iraqi necropolis of the Neanderthal man dating back to 60,000 years ago. The name Achillea was already present in the Greek physician Galen’s De simplicium medicamentorum facultatibus (129-200 AD)
The specific ptarmic epithet comes from the Greek πταρμικός ptarmicòs which causes sneezing, sneezing.

Geographical Distribution and Habitat –
Sneezewort is a plant originating in cold or temperate-cold areas of Eurasia.
In Italy it is a common plant, but only in the north, especially in the alpine areas.
Its habitat is represented by wet meadows near aqueous areas, with a preferred substrate of a limestone nature but also acidic with acid pH, where it grows, on the reliefs up to 1600 m a.s.l. 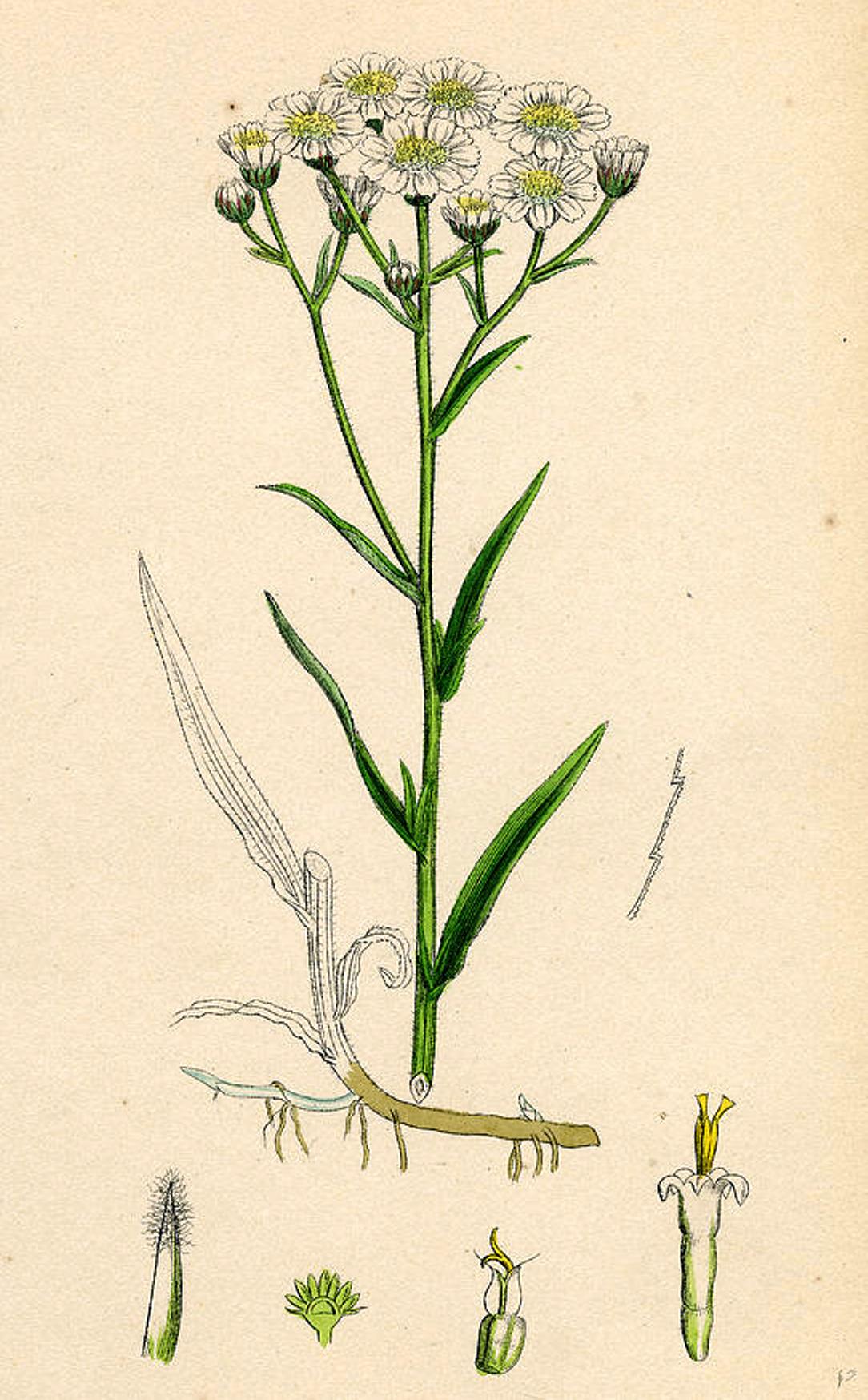 Description –
The Achillea ptarmica is a herbaceous plant, in a bushy form, which grows between 20 and 60 cm, in the form of a scapose hemicryotyphy, that is, a perennial herbaceous plant with wintering buds at ground level and protected by bedding or snow.
This plant has a horizontal creeping rhizome from which several simple stems start.
The roots are secondary from rhizome.
The leaves are arranged in a spiral and have a linear-lanceolate outline.
The inflorescences are composed of corymbs of 6 or 12 flower heads, with a typical structure of all Asteraceae, with scales (or bracts), arranged in three series which protect the flat or slightly convex receptacle, equipped with oblanceolate scourers on which s ‘insert two types of flowers: the external ligulate ones (from 8 to 12) trilobed in white color and the internal tubular ones, divided into five lobes, of gray-white color. The casing has a width of 5-7 mm and the heads are 12-17 mm in diameter.
The antesis is between July and September.
The fruit is an achene formed by tiny 1.5 mm cipseles, free of pappus, with a compressed and almost flattened shape.

Cultivation –
The Achillea ptarmica is a plant that, in order to be cultivated, prefers humus-rich, fresh soils, with a tendency to be acidic and exposed to full sun, even if it adapts to partial shade.
This plant is mostly cultivated, as well as for medicinal purposes, also for ornamental uses and used for flower beds and on the edge of ponds.
It is recommended to place the plants at a distance of 50/60 cm, between one and the other.

Uses and Traditions –
The stalk of the Sneezewort branches, just as its leaves are distributed in the various levels of the stalk, following the succession of Fibonacci.
The flowers and leaves of this yarrow, as for others of the same genus, contain essential oil (azulene, camazulene, ß-pinene, caryophyllene), flavonoids, organic acids (caffeic and salicylic), hydrolyzable tannins, sterols, lactones, coumarins.
It has healing and tissue repairing properties and for this reason, especially in the past, it was and is still used to treat skin lesions, wounds and sores of all kinds.
The plant is now considered an excellent antispasmodic remedy, as it helps to relax smooth muscle, in the presence of menstrual pain, colitis or irritable bowel accompanied by abdominal cramps; while for stomachic properties, it is used to promote digestive and liver function.
In addition, the presence of flavonoids gives it a rebalancing action on the hormonal system, useful for all those symptoms related to the premenstrual phase, associated with nervousness, irritability, mood swings, weakness and tiredness.
It also has astringent, anti-inflammatory and hemostatic properties and is therefore able to stop bleeding, and various bleeding problems due to inflamed gums, abundant menstruation or hemorrhoids; while the achillein would be able to control pressure fluctuations and restore normal blood circulation.
Attention because the use of this kind of plants is not recommended for subjects taking anticoagulant drugs because of its coagulant properties (which could affect the effectiveness of the drug). It can also cause allergic reactions in subjects sensitive to plants of the Astaraceae family .

Method of Preparation –
With Sneezewort, infusions can be prepared for internal use (1 tablespoon of yarrow flowers, 1 cup of water) by pouring the plant into boiling water and putting out the fire. It is covered and left to infuse for 10 minutes, after which it is filtered and can be drunk in the recommended dose of 2 cups a day between meals. The infusion and decoction are indicated for fissures, hemorrhoids, ulcerations, diarrhea.
A mother tincture can also be prepared with 40 drops in half a glass of water, to be drunk 2 times a day, between meals.
For external use instead you can make beauty wraps; in this case, an yarrow infusion is prepared by letting 10 g of the drug rest in half a liter of boiling water, they are made of compresses with cotton patches that are placed on the face to eliminate blackheads and fight the excess sebaceous skin. Finally, you can use the herb for sitz baths by placing a nice handful in cold water for a dozen hours and then boiling for a few minutes. After filtering, mix with the water in the bath and dive to the kidneys, to heal fissures or to soothe abdominal spasms.