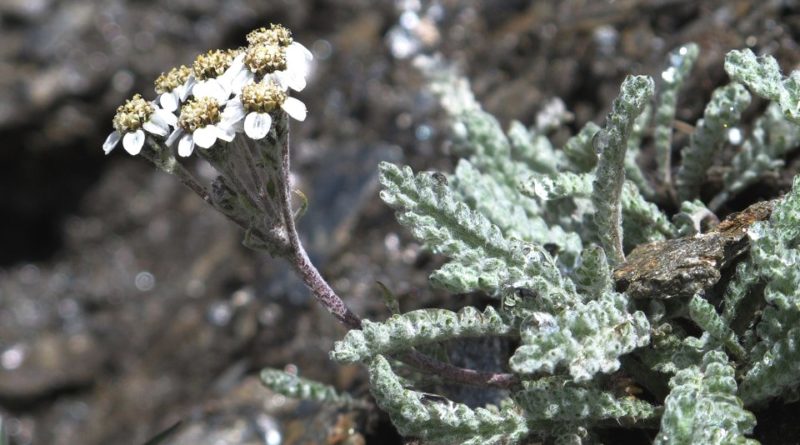 Etymology –
The term Achillea of ​​the genus was dedicated to Achilles (in Greek Aχιλλειοϛ Achilleios), mythical Greek hero who would have used some species of this genus to heal the wounds suffered in battle by his soldiers; a very ancient remedy so that this is one of the medicinal herbs found in an Iraqi necropolis of the Neanderthal man dating back to 60,000 years ago. The name Achillea was already present in the Greek physician Galen’s De simplicium medicamentorum facultatibus (129-200 AD)
The specific dwarf epithet comes from the Greek νανος nanos piccino, nano and from ἄνϑοϛ ánthos fiore: from small flowers.

Geographical Distribution and Habitat –
Dwarf yarrow is an endemic plant in the Alps and present in the western sector of the Alps, from the Maritime Alps to part of the Rhaetian Alps. The eastern border in Italian territory passes through Val Rendena, Val Meledrio, Val di Sole, Val di Non, Passo della Mendola, Val Venosta, with an average distribution between 1800 and 3000 meters but also present up to 3800 meters.
Its habitat is represented by rocks, stony grounds, consolidated gravels, preferably on siliceous soils, morainic debris. 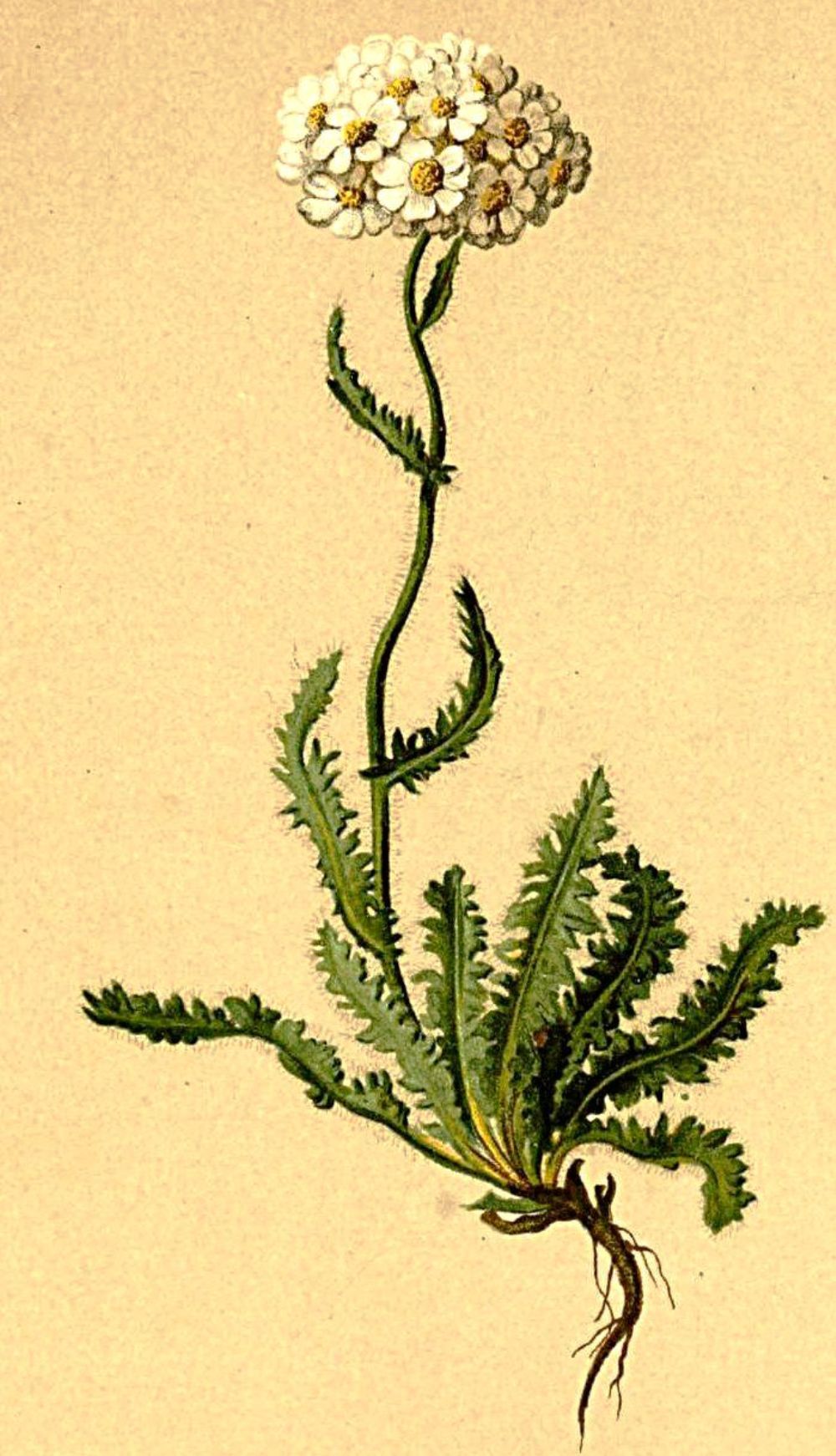 Description –
Achillea nana is a perennial herbaceous plant with a gray-tomentose and woolly color, strongly aromatic which reaches 5-10 cm in height.
The stem is ascending with creeping basal jets.
The leaves have a bipennate-seven lanceolate perimeter with thin segments (1 mm) more or less touching.
The flowers, both ligulate and tubular, grayish-white in color, are gathered in dense subglabrous corymbs, with little heads. the envelope is ovoid (diameter 5 mm) with shaggy scales edged with dark; 6-8 white ligules.
The antesis is between July and September
The fruit is an achene without pappus, compressed and flattened.

Cultivation –
The Achillea nana is a spontaneous and endemic plant of the Alpine areas but it can also be grown, starting from seed, on siliceous soils, even poor in organic matter and in similar climatic conditions of its habitat of origin.
The recommended collection period is the one from June to September.

Uses and Traditions –
The Achillea nana, although characteristic with its dwarf habit, intense tomentosity, strong and pleasant aroma, easily distinguishes itself from all the congeners present in its growth range; it can however be confused with the vicariant Achillea clavenae L., present in the Alpine-Eastern sector, if the plant grows in the border area between the two distinct areas. The Achillea clavenae L., however, stands out for the intensely yellow color of the tubular flowers of the disc, for the greater width of the leaf lacinias, which have an obtuse rather than acute apex, as well as for the winged leaf rachis.
It should be remembered that, if the Achillea nana is not among the species protected in the absolute sense, it is subject to collection limitations established by local legislation in the growing territories.
The main components of Achillea nana are: Essential oil, flavonoids, phenolic acids, sesquiterpene lactones, nitrogen compounds, curarins, tannins, triterpenes and sterols.
In particular, the active ingredient Achilleina was used in the 19th century in France and other European regions as a substitute for quinine to treat intermittent fevers. It also has anti-inflammatory and hemostatic properties.
The sesquiterpenes and lactones present are bitter and tonic and exert a stimulating effect on digestion. The tannins have an astringent action.
In summary, the diuretic, expectorant and digestive properties of the plant extracts are due to the high content of essential oils of the yarrow.
As regards, in general, its medicinal properties, which have been ascertained for centuries, the leaves and the flowering tops have a bitter, diuretic and antihemorrhoidal tonic action. Instead, vulnerable uses have been questioned, because it appears to delay scarring rather than speed it up.
A cosmetic use can also be made of this plant, as the chopped leaves can be used as a detergent for oily skin.

Preparation method –
Millefoglio nano, together with the other achillee, is among the main components of almost all recipes for aperitifs, bitters and herbal liqueurs. In addition, in dried form it is very useful to prepare a calming (excellent against stomach pain, even gastritis) and purifying tea.
For the domestic preparation of liqueurs and bitters, thanks to its intense aroma, the aerial parts are used.