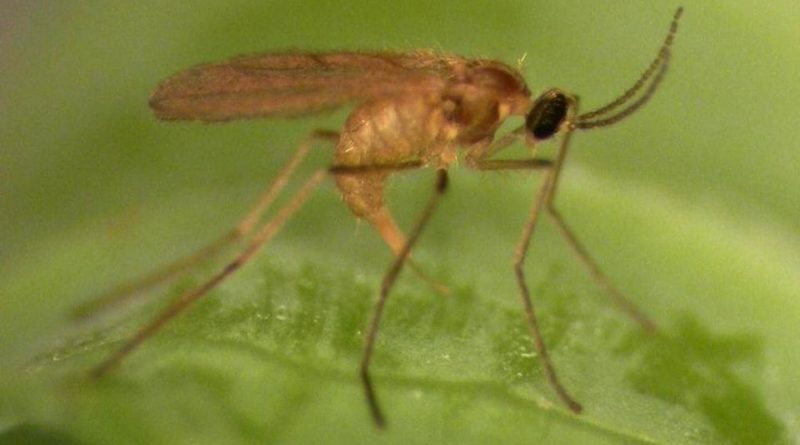 The Swede midge (Contarinia nasturtii (Kieffer, 1888)) is a small insect belonging to the Cecidomyiidae family.

Geographical Distribution and Habitat –
The Swede midge is an insect that prefers moist microclimates and lives at the expense above all of broccoli, cauliflower, head cabbage, Brussels sprouts, but also of plants such as rapeseed, mustard, horseradish oil and wild radish.
It is native to Europe and Turkey and was introduced to North America, where it first appeared in Canada in 1996 and where it is now considered an invasive species in almost all of the northern continent.

Morphology –
The adults of Contarinia nasturtii are just 1.5 mm long and have a greenish color and very velvety wings.
The eggs measure 0.3 mm x 0.08 mm, have a small peduncle of 0.06 mm and are transparent.
The larvae are 3 to 4 mm long, flattened in shape, first yellowish then lemon yellow; sharp on the front.

Aptitude and biological cycle –
The pupae of Contarinia nasturtii overwinter on the soil, in the fields cultivated with brassicaceae and rapeseed the previous year, inside a cocoon.
During the following spring, if the vegetation is early, the hatching begins in late April, while in normal years it begins from mid to late May. The hatching of this first generation can last for over 10-12 weeks as the eggs, in order to hatch, need humidity and the larvae emerge in a period that varies with the weather conditions.
Once they become adults, after mating, the females lay, among the youngest leaves close to the vegetative point, up to 20 small eggs per plant. After 3-4 days the larvae will be born which with their saliva dissolve the upper layers of the cells of the young organs of the plants and feed on the juice of the cells that come out.
In the following 8-14 days following the larvae, which reached the last stage, they drop to the ground where they pupate a few centimeters deep. The next generation will be born about two weeks later.
This evolutionary cycle lasts about 4 weeks in the summer months and generations often overlap.
The larvae of Contarinia nasturtii can significantly infest, especially the cruciferous and oilseed rape, causing twisting and distortion of the stems and leaves, which can lead, in addition to the deterioration of the plants, damage to the development of the flower heads.
For this reason, significant crop reductions are possible up to the total loss of the same.
In addition, the plants can be infested in any vegetative stage, even just before the harvest and, in general, the younger the plant is at the time of the infestation, the greater the damage will be.
The characteristic symptoms of the infestation are represented by the presence of malformed and curled leaves, often accompanied by the presence of subery wounds on the stem or in the vegetative point. In addition, suber formations are also possible on the inflorescence, which make the crop unsaleable and lead to an increase in lateral branches.

Ecological role –
The Swede midge is a small insect that lives at the expense, as mentioned, of cauliflower, broccoli, cabbage, Brussels sprouts, kohlrabi and a number of wild plants of the cruciferous family, including the shepherd’s purse, watercress , and others.
When the first demonstrations appear, in fact, it is already too late to intervene. Prevention measures and possible treatments should be performed at best when the plants are still young and sensitive.
Among the preventive measures we remember, good agroecology techniques which consist of:
– good crop rotation which reduces the risk of infestation. In the affected areas, a cultivation pause of at least two years between the cruciferous plants should be respected as the pupae of Contarinia are able to survive in the soil for more than a year;
– for crops, open areas and in full sun are preferred, as Contarinia nasturtii prefers protected and shady areas;
– to prevent infestation, a distance of at least 100 m between new crops and autumn corciferous crops of the previous year (such as Brussels sprouts, savoy cabbage, winter cauliflower) must be respected;
– it is good to keep this minimum distance also with respect to the rapeseed fields in the current and previous year;
– it is important to maintain mechanical weed control and cleaning, even in the non-cultivated parts. If in the risk areas, after the harvest, the fields are not processed within a short time, it is possible that the eggs and larvae of the parasite can develop on crop residues and on the weeds belonging to the cruciferous family where the population of the parasite increases further . Among these we remind that spontaneous rapeseed is a very attractive host plant for the cabbage cecidomy. If left on the field it causes a strong increase in the parasite. For this reason, after threshing, it is important to respect the following rules: it is recommended to delay tillage at least until all the fallen rapeseed seeds have sprouted. In dry weather it is possible to facilitate budding with a surface harrow. Only at this time should the crop remains be buried.
In addition to these techniques of correct management and prevention, monitoring is necessary to define the tolerance threshold.
Monitoring that must be carried out during the flight, in the period of egg laying, in fact, as mentioned, when the symptoms of damage are visible, it is too late to take control measures, since at that moment the larvae that damaged the plant are already pupated in the soil.
The struggle, in addition to the good agroecological techniques, if necessary, consists above all in setting up protective nets, anti insects only for the areas, where in the last two years no crucifers have been grown and, consequently, there are no pupae in the ground. Obviously, the width of the links should be 0.8 x 0.8 mm and it is important to install nets and fences in time, before the first generation of the flight begins on cruciferous and rapeseed fields of the previous year.
As for the treatments with synthetic products, what to try to avoid in advance with the appropriate agronomic criteria mentioned above, these must be carried out when the critical number of catches is reached.