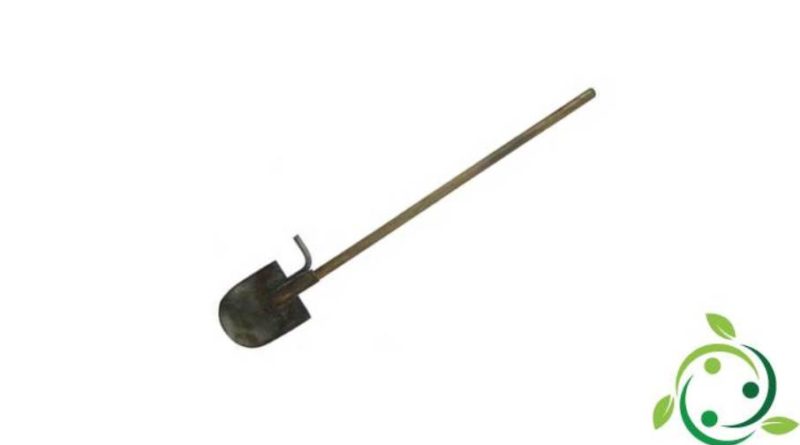 The term vanga is a term from the late Latin, vanga, most likely of Germanic origin.
The spade is an agricultural tool used to prepare the soil for crops, turning it over and chopping it to a depth of 15-20 cm.
The spade consists of a flat blade, mostly triangular in shape, equipped with a sturdy handle, often with a handle, in which a short transverse metal rod (stirrup or staff or vangile) is inserted, on which pressure is applied with the foot to make the spade penetrate the ground and remove a clod.
The spade remotely resembles a shovel but, unlike this, its pressure in the ground occurs by means of the foot and not by force of arms.
In fact, in its use, the spade is used as a 1st type lever, and therefore it is implied that it also has a support fulcrum. In the traditional spade, the fulcrum of support consists in the area in which the handle connects to the blade: at the end of the insertion of the latter into the ground, this fulcrum area is found at ground level constituting a natural point of support during the rotary movement that allows the extraction of the root ball from the ground, a movement imposed with a hand that usually pushes the end of the handle downwards. The resistance is represented by the detached plate resting on the medium-low part of the blade.

Once the clod has been separated and raised, the second hand grasps the handle as much as possible towards the blade, in order to complete the lifting of the same above the ground level without the support of the latter. Once the root ball is raised, it is brought slightly forward (above the cavity caused by the previous dig) and a rapid movement, mainly rotating along the axis of the handle, allows the root ball to fall which, falling on the front of already worked soil, spontaneously completes its reversal , often fragmenting further.
When it comes to tilling particularly hard or clay soils, there are models of spades with a small trapezoidal blade.
The handle is straight, robust, circular in section; those currently on the market are in beech, ash and in rare cases badger. There is also an iron handle, in this case the spade is entirely metallic, and therefore it becomes more robust, but also heavier. With particularly hard soils, the iron handle is better resistant to breakage.
In the traditional spade the fulcrum was not present, which was inserted later, around the fifties of the last century, in order to make the job much easier, with a considerable saving of effort and effort. The fulcrum was also invented as an accessory to be applied to the spade, at a height of 30 cm from the upper edge of the blade.