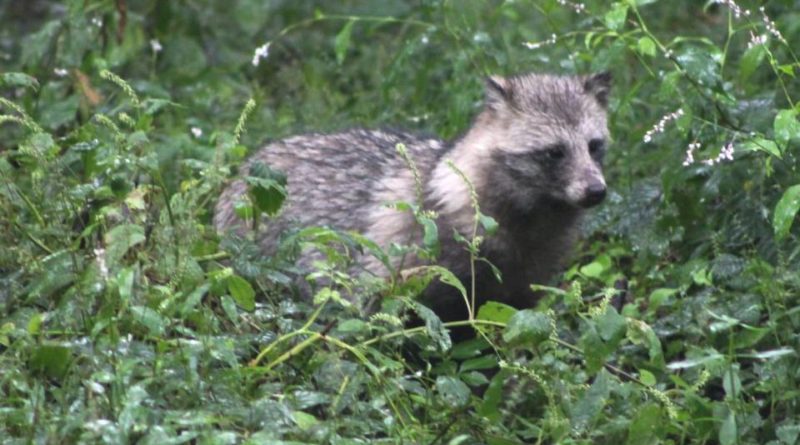 The Raccoon dog (Nyctereutes procyonoides Gray, 1834) is a mammal belonging to the Canidae family.

Systematic –
From a systematic point of view it belongs to the Eukaryota Domain, Animalia Kingdom, Phylum Chordata, Mammalia Class, Carnivorous Order, Canidae Family, Caninae Subfamily, Vulpini Tribe and therefore to the Genus Nyctereutes and to the Species N. procyonoides.

Geographical Distribution and Habitat –
The raccoon dog is a canid native to the Far East, from northern Indochina to the southeastern corner of Russia and is also present in Mongolia and the Japanese archipelago, where it is restricted to the area related to Hokkaido, Honshu, Shikoku, Kyushu , Awaki, Sado and other islands north of Kyushu.
It was introduced to Europe in 1928, near Moscow, where it was bred for years in captivity for its fur in Russia; subsequently it was decided, around the second half of the 1920s, to release thousands of specimens of the subspecies N. p. ussuriensis in various areas of the European portion of the Soviet Union to establish a new population of fur animals.
It was thus that in later times this mammal spread to other European countries and reported, in later moments in various areas.
The first reports in Finland date back to the 1930s and 1940s, and then colonized the country in the 1950s until it inhabited most of central and southern Finland in the mid-1970s.
Colonization in Estonia and Lithuania occurred in the 1950s and Sweden in 1945, where it only began to proliferate in the early 21st century. In Norway, the first report occurred in 1983 and there were no further sightings until 2008, when a handful of specimens were shot down in central Norway.
In Poland the first reports took place in 1955, and in East Germany in 1961-1962. From 1995 to 2003, there were also small reports in Denmark.
In France, the species was first reported in the second half of the seventies, with the first confirmed reproduction in 1988. Today, the species is also found, albeit sporadically in the Netherlands, Moldova, Slovenia, Croatia, Bosnia and Herzegovina, and Serbia. Furthermore, there has been at least one report in North Macedonia, and in 2008 a car was hit by a car in southeastern Spain.
Sightings have also taken place in Italy since the second half of the 1980s in the Val di Non (Trentino), with a further report in the Oltre Po Pavese during the spring of 1990 and other subsequent reports.
Ultimately, today it is present in Europe and central-northern Asia and, probably, it is present throughout the Alpine and north-Apennine area.
The habitat of this species is that of humid forests and the banks of rivers and lakes in summer and heaths in autumn and winter. In the Finnish archipelago, it lives mainly in pine forests, where it feeds on blueberries. 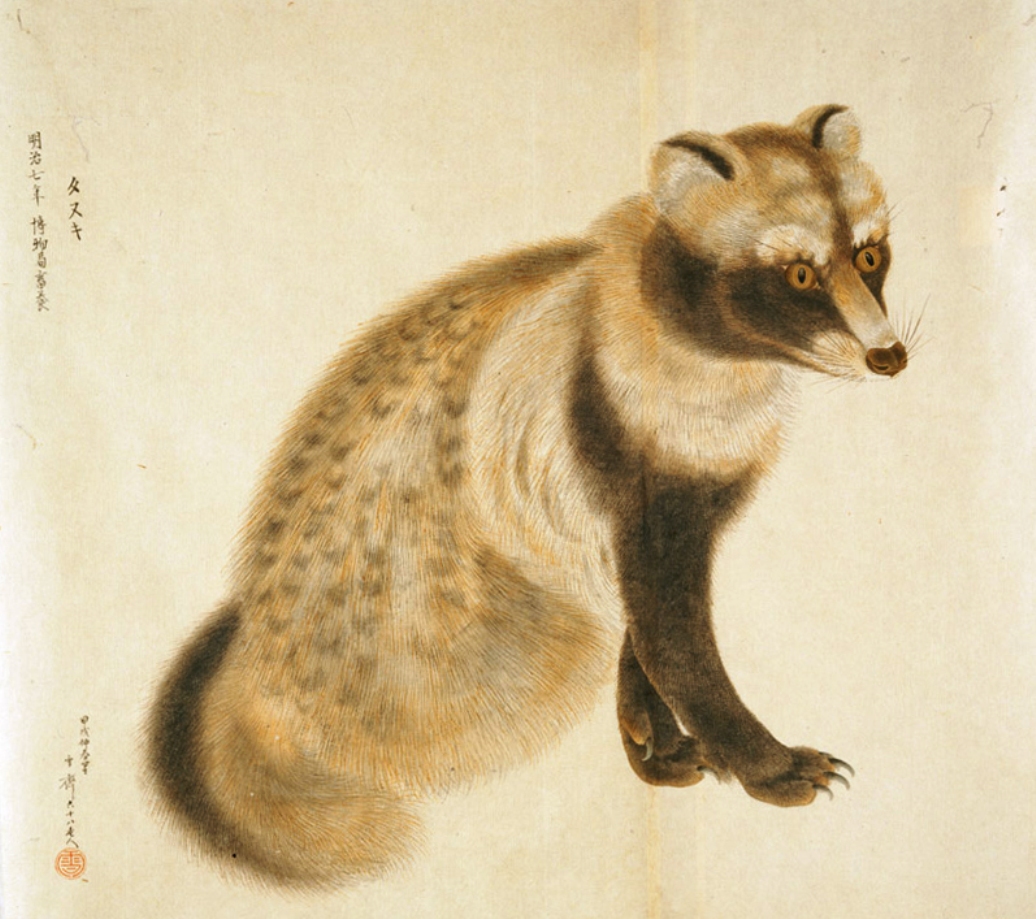 Description –
The Nyctereutes procyonoides is a medium-sized mammal of 50-85 cm in length, between head and body, with a tail length of 15-31 cm, an ear length of 4-6.5 cm and a height at the withers. of 35-39 cm. the species has a certain sexual dimorphism with the male, normally larger than the female, which weighs 4.2-9.2 kg and the female 3.5-8.7 kg. Adult size is normally obtained in the first autumn after birth, and sexual maturity reaches 9-11 months.
It is also recognized for having the body about like a fox, but more compressed.
The hair is long and thick, and superiorly of gray – brown – blackish color, while inferiorly it is dark.
The skull is robust, with a high forehead, a short facial region, and a well-developed sagittal crest. The jaw has a large protuberance, separated from the angular process by a recess, a primitive trait shared with the urocions of the new world. The teeth are relatively small and weak, with often the missing lower third molar.
It has a pointed muzzle, with black nose, dark face mask, which from the eyes (reddish-brown) reaches the throat; the ears are short, rounded, slightly protruding from the hair. It has short legs and a short, thick tail.
In general, the Nyctereutes procyonoides is an anomalous species that maintains traits of other caniforms, such as raccoons and badgers, lost in the other canines, being unusually squat and slow, having a dark fur mask around the eyes, and going into hibernation .

Biology –
The Raccoon dog is a strictly monogamous animal, which defends its territory from specimens of the same genus; the size of the territory depends on the abundance of food. This animal usually mates in the period of March and both parents dig or take possession of a den a week before giving birth.
The gestation lasts 8-9 weeks (on average 62 days) and the birth takes place in the spring, with 4-8 small inept with closed eyes and black fur, raised in underground lairs or in niches.
In the areas of Finland, Poland and south-eastern Russia, the average litter consists of nine small, heavy 120 grams. In colder areas, such as northwest Russia, the litters are smaller, usually with only six puppies.
The offspring are cared for by both parents and the puppies emerge from the den at the age of 3-4 weeks.
Like many caniforms, but only among canines, the Raccoon dog hibernates.
So in the first half of winter, this mammal increases its subcutaneous fat by 18-23% and internal fat by 3-5%. Specimens that fail to achieve these fat levels usually do not survive the winter. When the depth of the snow reaches 15-20 cm, the mobility of the Raccoon dog is limited to 150-200 meters from the den. During hibernation, the metabolism slows down by 25%, returning to normal around February, when females go into heat and food becomes more available.

Ecological role –
The raccoon dog is a mammal with twilight-nocturnal habits, solitary or more rarely in pairs or in family groups.
In general it is above all a nocturnal and opportunistic animal, which occupies an ecological niche similar to that of the badger and the red fox, feeding on any source of food available, although it can become a specialized hunter of amphibians in wetlands.
It is in fact an omnivorous animal, with a diet that varies seasonally. In the first half of summer, it feeds mainly on frogs, lizards, invertebrates, insects, birds and their eggs. However, its diet is also represented by plants, in particular berries and fruits, before going into hibernation. Regardless of the season, small rodents are their main prey. If the opportunity arises, Raccoon dog can also feed on carrion, fish and crustaceans such as crabs and crayfish.
The Raccoon dog does not bark, but growls if threatened.
Among its main predators there is the wolf that kills large numbers of them especially during spring and summer, but also rarely in autumn. Red foxes kill the cubs of this animal, and have been reported to bite adults to death. Furthermore, both red foxes and badgers compete with nittereuts for food, and when they enter their lairs they can be killed. Cases of predation by lynx are rare, but nittereuts are vulnerable to attack by various birds of prey such as golden eagles, sea eagles, goshawks and horned owls.
As for its relationship with humans, Raccoon dog provides a thick and durable fur, but bristly and in captivity, it can produce 100 grams of wool of a quality only slightly lower than that of goat.
Raccoon dog furs are almost exclusively used for finishes, as guard hairs have a tendency to tangle.
In addition, the meat of the Raccoon dog is highly nutritious, with a content of 18% protein and 3% fat. It is appreciated by the inhabitants of the Russian Far East.
Raccoon dog, on the other hand, poses some problems for local fauna, in particular for amphibians and feathered game, especially on the islands. Among other things, in the river areas, during the spring, it feeds almost exclusively on eggs and chicks; it is also harmful to fur animals such as muskrats, since it destroys their burrows and feeds on their young. In Ukraine and southern Russia, nittereute causes a lot of damage to vegetable gardens, melon crops, vineyards and wheat fields.
In addition, this species can carry parasites and diseases harmful to humans and livestock. It is also an important vector of anger: in Poland and Estonia, 30-50% of the cases of rabies were attributed to the nittereuti, as well as about 75% of the cases in Finland during the epidemic in 1988-1989.
For this reason, in various countries there are different regulations for hunting this mammal, more or less restrictive. In Italy, for example, the species is not protected, but cannot be hunted without the permission of the competent authorities, as it is not included in the list of species collected.
As far as its ecological status is concerned, the Nyctereutes procyonoides is classified by the IUCN among the species at minimum risk, given that it is common in its Asian indigenous range and widely spread in Europe after artificial introductions.