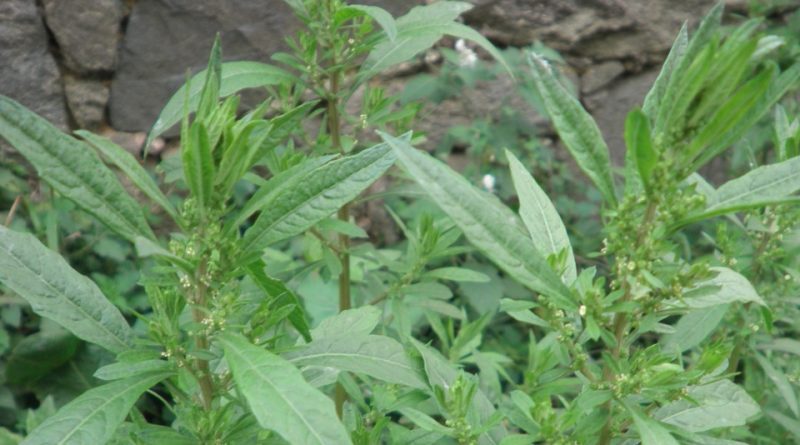 Etymology –
The term Dysphania comes from the Greek δυσφανες dysphanes indistinct, not very evident (from the adversary prefix δυσ- dys- and from φανερός phaneros visible, conspicuous): for the not very evident flowers, enclosed in the receptacle.
The sepithic epithet ambrosioides comes from the Greek ἀμβροσία ambrosía ambrosia, a miraculous food that conferred immortality on the Greek and Roman gods (which seems to be a contradiction given that this genus includes highly allergenic plants; Linnaeus chose this name probably because the ancient herbaria recommended it). ‘use of Ambrosia maritima as a remedy for stomach problems) and from the Greek εἷδος eídos appearance, semblance: similar to an Ambrosia.

Geographical Distribution and Habitat –
Wormseed is a species of neotropical origin (Central America, South America and Southern Mexico) which today has become sub-cosmopolitan and present in all regions of Italy as an adventitia.
Its habitat is that of ruins and rubble, often in houses and along streets, from sea level to about 800 m. 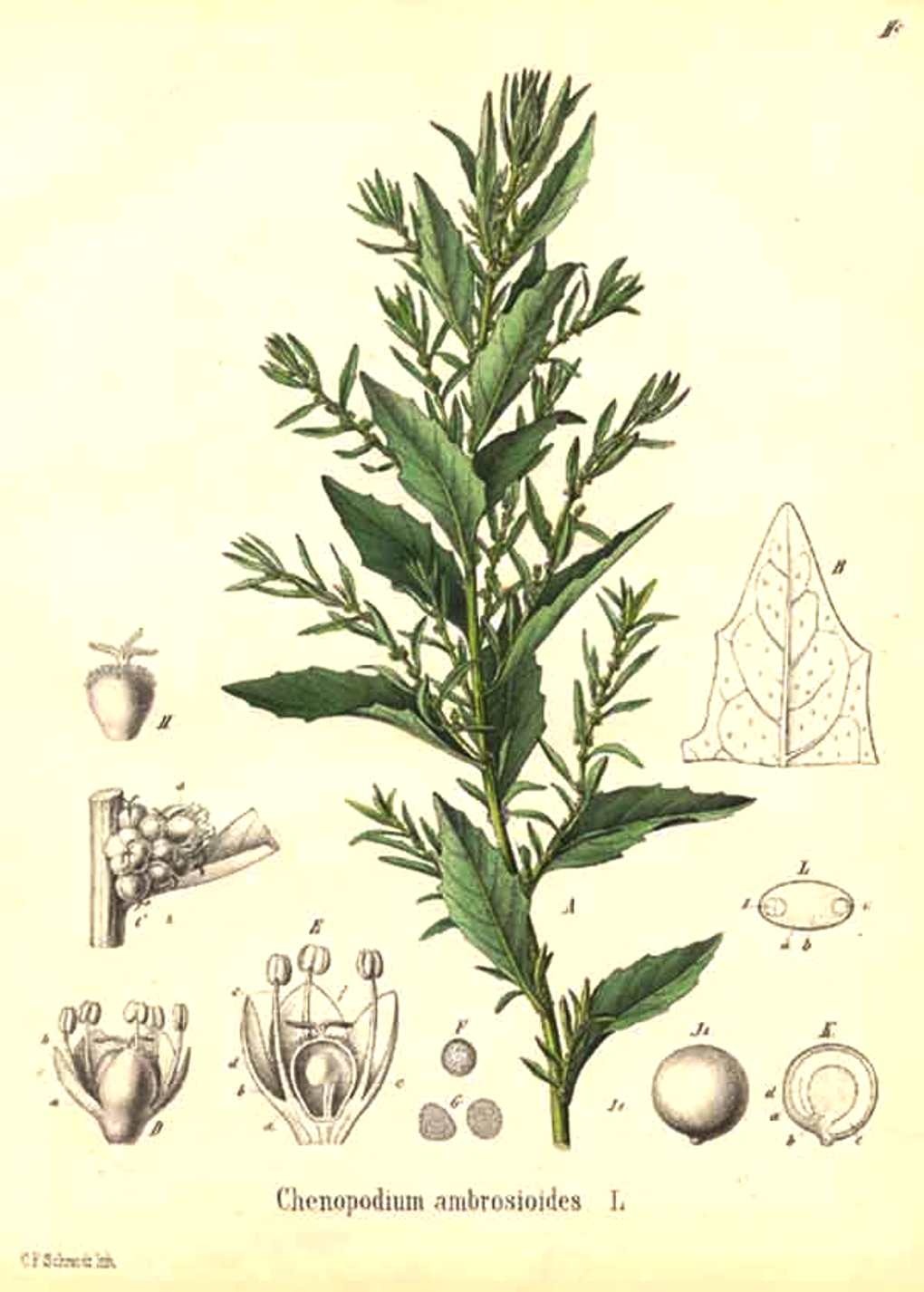 Description –
The Dysphania ambrosioides is an annual or short-lived perennial herbaceous plant, which can reach a height of 1.2 m; it appears in an irregularly branched form.
The leaves are oblong-lanceolate of dimensions up to 12 cm.
The flowers are small and green, carried in a branched panicle at the apex of the stem.
The fruits are utricles enclosed by the globular perianth, depressed, non-adherent pericarp.
The seeds are 0.5-0.8 mm in diameter, reddish-brown, ovoid, generally horizontal, sometimes oblique or vertical, with flattened or rounded edges and an almost smooth head.

Cultivation –
Wormseed is a plant that blooms between June and September. For its cultivation it prefers sunny soils and sowing should be done between March and April.
The optimum germination temperature is 20–22 ° C and the germination time goes from
7–21 days.
In addition to its native areas, it is cultivated in warm temperate zones up to the subtropical areas of Europe and the United States (Missouri, New England, Eastern United States), sometimes becoming a grass with pest characteristics.

Uses and Traditions –
Disfantia ambrosioides, also known by other names such as: Jesuit tea, Mexican tea, which has been used over time for various purposes.
In the kitchen it is used as a leaf vegetable, herb and herbal tea for its pungent taste.
When raw, it has a resinous and medicinal aroma, similar to oregano, anise, fennel or even tarragon, but stronger.
The fragrance of this plant is strong but difficult to describe. A common analogy is turpentine or creosote. It has also been matched with similarities with citrus fruits, savory and mint.
It is used in Central American cuisine. Although it is traditionally used for its flavor and its alleged carminative properties it is sometimes also used to flavor other traditional Mexican dishes: it can be used to flavor typical Mexican and Central American dishes such as quesadilla and sope, soups, tamales with cheese and chilli, peppers, eggs and potatoes, enchiladas and other dishes.
It is often used as a green seasoning and in fried white rice and an important ingredient for preparing the green sauce for chilaquile.
Attention, however, to its toxicity due to the presence of essential oils, of which there have also been cases of death due to an overdose of essential oils, attributed to the content of ascari dolo (1,4-peroxide-p-menth-2-ene). Symptoms include severe gastroenteritis with pain, vomiting and diarrhea.
For this reason, even if this plant has a consolidated place in recipes and folklore, it is wise to use only the leaves in the kitchen and sparingly.
The essential oils of D. ambrosioides contain terpenic compounds, some of which have natural capacities as pesticides. Ascaridol inhibits the growth of neighboring species, so it is better to grow it at a distance from other plants.
Aromatic farinello not only contains terpenic compounds, but also provides partial protection to neighboring plants simply by masking their scent to some insects, making it a useful plant for entomological protection. Its small flowers can also attract some wasps and predatory flies.
As for ascaridol, this plant contains up to 70%; it also contains limonene, p-cymene and minor amounts of numerous other monoterpenes and derivatives of monoterpene (α-pinene, myrcene, terpinene, thymol, camphor and trans-isocarveolus). Ascidol is toxic and has a pungent, not very pleasant taste.
This plant can also be used as a base for some natural dyes for moss green coloring.

Preparation Mode –
The wormseed is used, a little in all its parts in many typical dishes of Central and South America, especially Mexican dishes such as quesadilla and sope, soups, tamales with cheese and chilli, chillies, eggs and potatoes, enchilada and others.
It is often used as a green seasoning and in fried white rice and an important ingredient for preparing the green sauce for chilaquile.