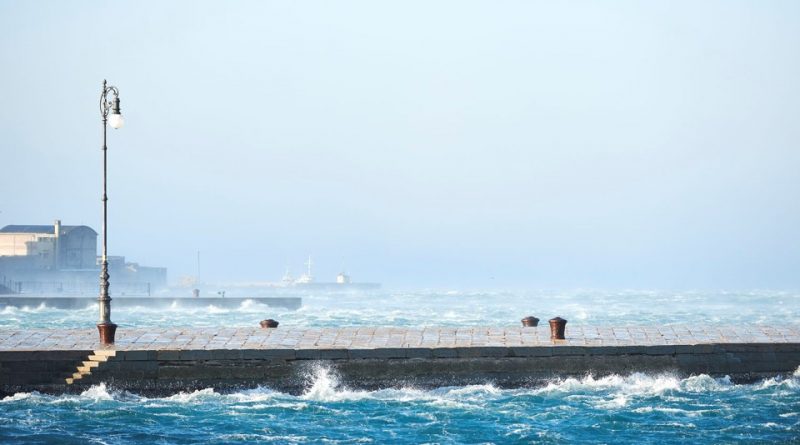 The Bora is a wind from the northeast and east-north-east, dry and cold, which blows violently and with gusts that can reach a speed of 180-200 km per hour, along the eastern coasts of the Adriatic, especially in the winter months.
The bora originates from the existing imbalance between the high pressure area of ​​central Europe, which also extends to the Balkan peninsula, and the area of ​​low pressure existing on the Adriatic.
For clear Bora, or anticyclonic, it is said that accompanied by clear weather and low temperatures; with the term dark bora, or cyclonic, means that accompanied by cloudiness, rain or snowfall. The bora that blows on the Black Sea at the foot of the Caucasus is also well known.
The bora is a catabatic wind (from the Greek word katabatikos, which means “going downwards”), that is, a wind blowing down from a topographical inclination, like a hill, mountain, glacier or a plateau.
The term Bora derives from Boreas, the personification of the northern wind in Greek mythology. The bora known in Italy is that of Trieste.

In Croatia it is famous that of Mark and River and in Slovenia that of Aidussina. It originates from northern Dalmatia.
Another characteristic of the Bora is that it does not orient itself in a single direction, according to the law of Buys Ballot, but fluctuates around an average direction that is typical for each location. Its characteristic is to be a “discontinuous” wind, that is to say with stronger gusts, interspersed with less intense gusts. These gusts are commonly called “gusts”. It blows especially in winter, and is called “dark bora” with overcast skies or rain.
This wind, on the Gulf of Trieste, where it blows frequently has a typical direction of E-NE. In the Venezia Giulia region, the wind strengthens considerably due to the large temperature differences between the Karst and the coast, becoming furious and turbulent, with gusts that can exceed the 150-160 km / h threshold.
This wind, although reduced by 25%, also affects some towns in the province of Gorizia, including Gorizia, Grado and Monfalcone, Cividale del Friuli, the eastern Lower Friuli and the Natisone Valleys in the province of Udine, as well as the municipalities bordering the Slovenian Collio.