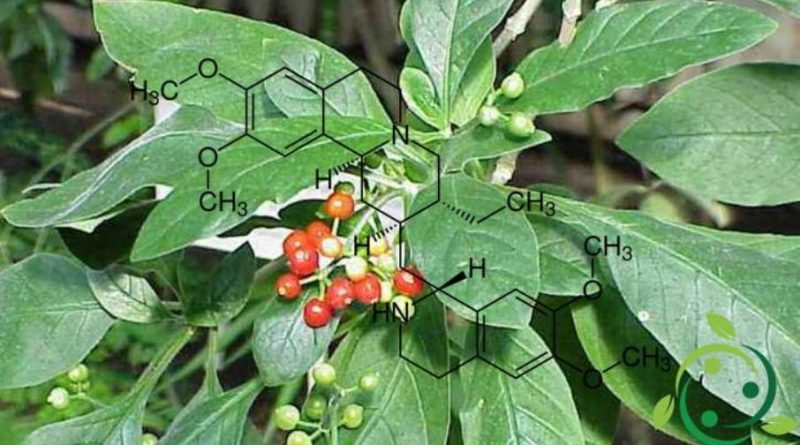 Emetine, whose term in the official IUPAC nomenclature is: (2S, 3R, 11bS) -2 – [[(1R) -6,7-dimethoxy-1,2,3,4-tetrahydroysokinolin-1-yl] methyl ] -3-ethyl-9,10-dimethoxy-2,3,4,6,7,11b-hexahydro-1H-benzo [a] quinolysin is an alkaloid whose brute or molecular formula is: C29H40N2O4.
Emetine is an alkaloid from the roots of Psychotria ipecacuana (but also present in Viola odorata) which is also prepared synthetically by methylation of cefeline.
Ipecacuana is a shrub native to India, also cultivated in South America and Malaysia. Belonging to the Rubiaceae family, it is distinguished commercially in two main varieties: Ipecacuana del Mato Grosso (Cephaelis ipecacuanha) and Ipecacuana maggiore or Costa Rica (Cephaelis acuminata).
This plant contains isoquinoline type alkaloids (1.8-4%), including cephalin, psicotrin and emetine.
This last substance, whose name refers to the term emesis, underlines the main phytotherapic application of Ipecacuana, which is precisely that of inducing vomiting. This effect is largely due to the irritating action on the gastric mucosa and to a lesser extent to the stimulus directed towards the vomiting center.
Emetine has amebicidal activity, mainly in the intestinal walls and in the liver. Its spectrum of action is directed to protozoa, especially to Entamoeba histolytica. The drug acts on the parasite’s trophozoites, while it is not effective against encysted forms.
Among the derivative compounds we remember the emethine hydrochloride which is used in the treatment of severe forms of intestinal amebiasis, hepatic amoebiasis and amoebic abscesses, although less toxic drugs (eg metronidazole) are now preferred. In symptomatic intestinal amebiasis, emetine is administered in association with amebicides active in the intestinal lumen (eg diloxanide furoate) while, in hepatic amebiasis, emothyine and luminal amebicide are associated with chloroquine.
Ememine hydrochloride, after parenteral administration, concentrates mainly in the liver, kidneys, lungs and spleen.

It is then removed with the urine very slowly, so that it can be detected even 40-60 days after the end of the therapy.
In humans the minimum lethal dose is 150 mg. In the mouse the LD50 is 32 mg / kg per s.c. and 30 mg / kg per os.
The toxicity of emetine is particularly serious with regard to the cardiovascular system: there are alterations of the ECG with flattening or inversion of the T wave and elongation of the Q-T interval, precordial pain, dyspnea, tachycardia, orthostatic hypotension.
The accumulation of emetine, caused by high or too frequent and prolonged doses, can give rise to an acute degenerative myocarditis that manifests itself with dilation and heart failure with a rapid and often lethal course.
Following administration of emetine various gastrointestinal disorders may occur such as: diarrhea, nausea and vomiting, often accompanied by dizziness and headache; there may also be neuromuscular disorders such as weakness, stiffness and pain in the muscles, especially in the neck and extremities.
Eczematous or urticarial lesions may also appear and pain, swelling, itching and necrosis and sterile abscesses may be observed in the area of ​​administration.
The use of eminine is contraindicated in patients suffering from cardiac, renal, neuromuscular insufficiency. Furthermore, its use during pregnancy should be avoided and it should not be given to children except in the treatment of severe diarrhea due to amebiasis that does not respond to other drugs. Administration to the elderly should be carried out very carefully.
The medical practice is that of patient surveillance, with continuous monitoring of cardiac functions and absolute rest, which must be continued for a long time given the slow elimination of the drug.