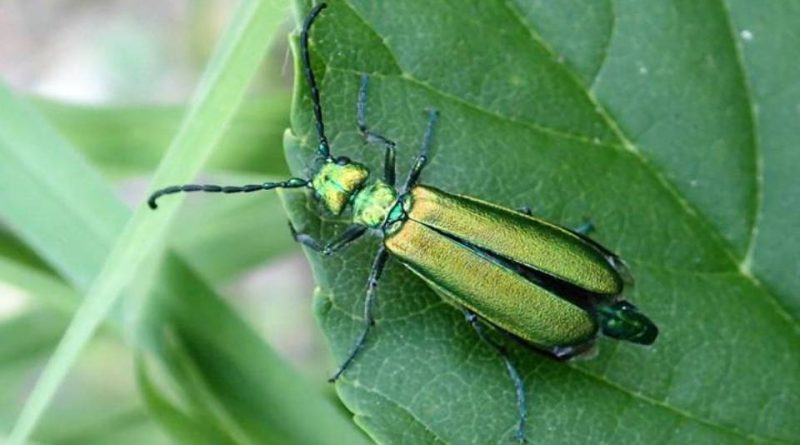 The Spanish fly (Lytta vesicatoria Linnaeus, 1758) is a beetle from the Meloidae family.

Geographical Distribution and Habitat –
The Spanish fly is an insect present and common throughout southern Europe and also present in Asia and northern Africa. The population of this insect diminishes and then moves towards the central regions of Europe and then disappears in the Nordic countries.
Its habitat is linked to the presence of host plants such as ash, elder, maple, poplar and in some cases also olive.

Morphology –
The Lytta vesicatoria can be recognized in the adult state due to the color of the golden metallic green body, which can take on blue-green shades, with a length that varies between 15 and 20 mm and width less than 10 mm.
On the antennas there are black filiform flagella as well as in some cases for the legs of the legs.
The elytrons completely cover the abdomen.
Type I larvae (triungulins), campodeiforms have an elongated and depressed body where the prothorax is more developed than all the other segments. The body is covered with hair and the color is black with the exception of meso, metatorace and legs that are white. On the head there are long antennas and the abdomen has two well developed cerci. It has small dimensions that do not exceed 2 mm in length.
Type II larvae (cirtosomatic) present with a slightly sclerified skull and rather short legs.

Attitude and biological cycle –
The Lytta vesicatoria makes only one generation a year through a hypermetabolic cycle, where the females, after having fed and mated, lay their eggs in the ground in the vicinity of the pedotrophic nests of Apene Hymenoptera where the triungulin feeds on their pre-imaginal stages and provisions .
Here the insect passes to the second larva stage and the postembryonic development continues. The larvae, before the metamorphosis, go through a phase of quiescence “hypnoteca” and in this state it takes refuge in small pits obtained in the ground.
From this larva the one that undergoes metamorphosis differs. The pupa occurs in spring while the first adults appear in May and en masse during the period of June.
This insect develops its cycle on plants such as the ash (Fraxinus excelsior, Fraxinus angustifolia and also Fraxinus ornus), on the elder, on the maple, on the poplar and on other trees, including those object of cultivation, to which it causes leaf erosions, often confined to individual plants, which are defoliated; moreover it can gnaw the axis of non-lignified shoots.
It can also live on the olive tree where it feeds on the leaves and in this case it causes damage especially on the young plants of which it irreparably damages the buds, compromising the development of the same plants.

Ecological Role –
The Spanish fly is a fairly well-known insect since ancient times for the production of cantharidin, a substance present in its elytra, used in the past as an aphrodisiac, anti-inflammatory and also as a poison.
From the dried animal, in fact, we extract the cantharidin which has a characteristic, unpleasant smell and a pungent bitter taste.
The insect, as mentioned, lives at the expense of plants of ash, elder, maple, poplar and other spontaneous or cultivated species operating defoliation proceeding from the top to the bottom. The presence of this insect is perceptible through an intense smell similar to that of a mouse.
In the past, if identified in a timely manner, the adults were collected by placing tents under the plants in the early hours of the morning and shaking the branches to induce the phenomenon of the outbreak. In this way defoliation was avoided; in some areas something was obtained from the sale of captured adults, for the extraction of cantharidin.