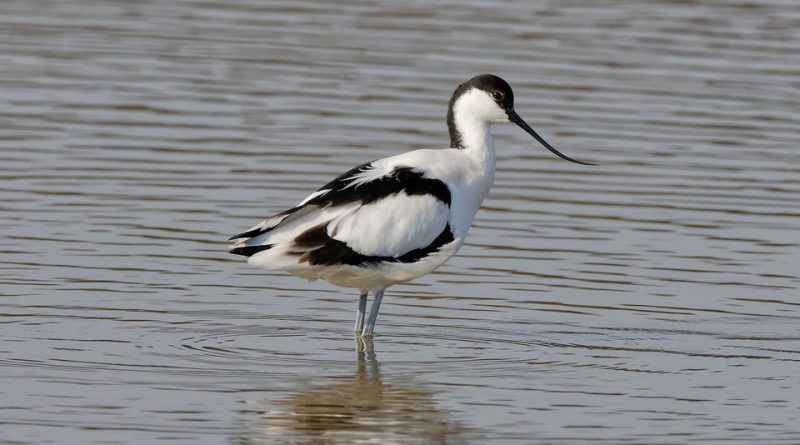 Geographical Distribution and Habitat –
The pied avocet is a species that lives in most of Europe and in an area that includes western and central Asia up to south-eastern Siberia and Manchuria, in north-eastern China. Other populations of this bird are also found in the Maghreb, in East Africa and on the Indian peninsula.
This bird winters in a territorial belt that includes the western regions of Europe and Africa, up to the Middle East and the Indian subcontinent.
The populations that make the longest journeys arrive as far as Myanmar and South-East Asia.
The migration of these birds begins in the period from August to October. In autumn, it is possible to observe these birds in their traditional transit places, such as the Tagus estuary, in Portugal. The return period coincides with the months of temperature recovery, between March and May.
The populations that nest in Europe are found in the coastal wetlands of central-northern Europe and in those of southern Europe. Italy hosts 20-25% of the Mediterranean breeding population with a displacement concentrated mainly in Sardinia, Emilia-Romagna and Puglia.
The habitat of this species is often characterized by salt lagoons. 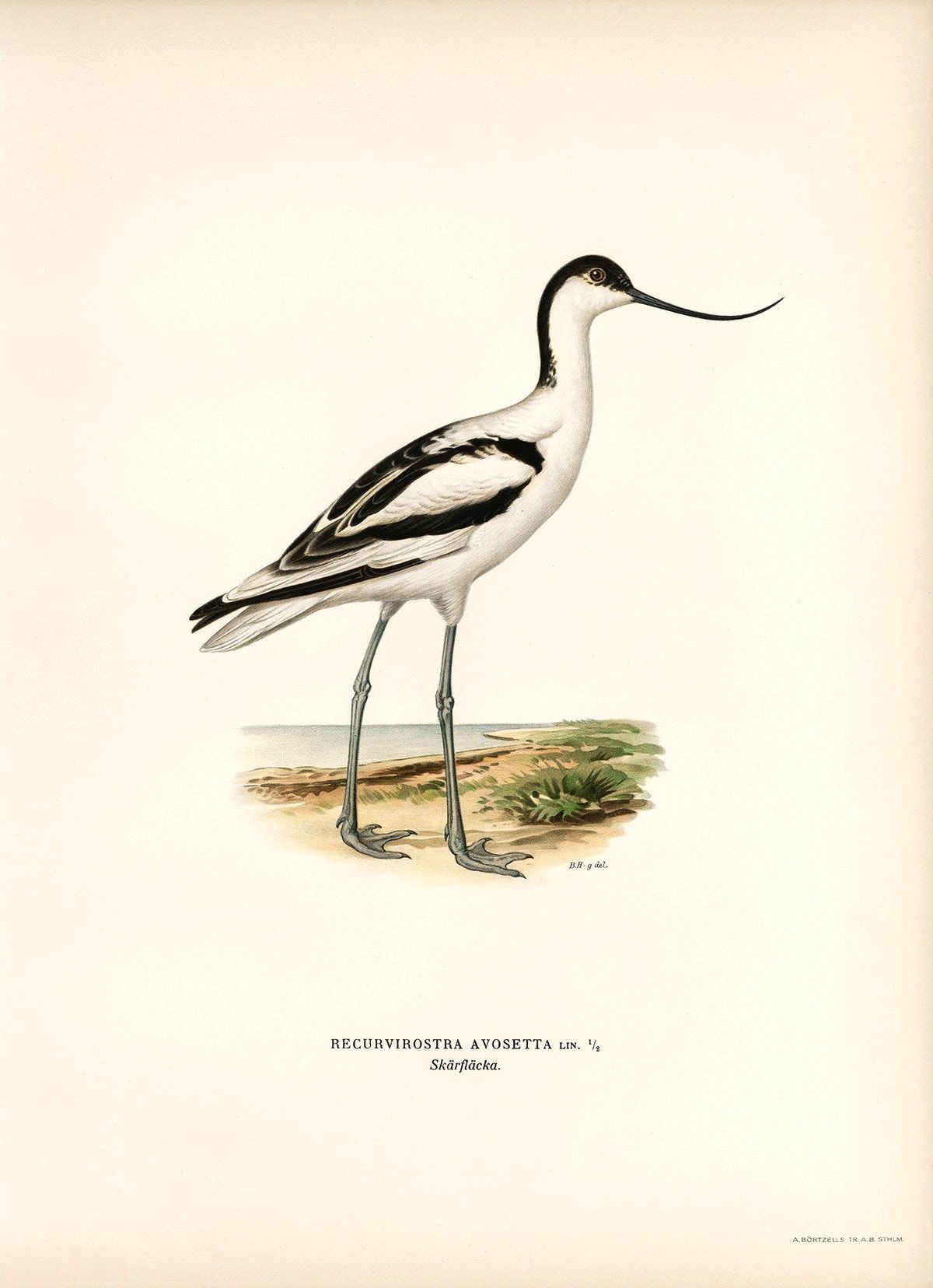 Description –
The Recurvirostra avosetta is a bird that measures 42-45 cm in length, with a weight of 200-440 g, with tarsus of length 85-98 mm in the male and 77-105 mm in the female. The wingspan is 77-80 cm.
It is recognized for having the beak, a little less than 10 centimeters long, curved upwards, a characteristic for which this bird is called «crooked beak» or «saber-beak».
It has a plumage, in which white and black alternate in various ways, with the forehead, the cervix and a band extending to the base of the back side of the neck in black. Also the back and the wings are black.
The beak is dark, while the rest of the body is white.
The long legs are instead of a slate-bluish color and during the flight they protrude backwards; finally he has webbed toes.
Minimum is the sexual dimorphism with sexes with similar coloring (males on average larger than the females). Undifferentiated seasonal and youthful clothes.
During flight, the neck contracts slightly, so that it appears relatively short. The legs extend well beyond the tail. The flapping of the wings is rapid and regular until the bird settles on the ground and glides gently. After landing it often remains for a short time with its wings spread.
This bird emits nervous and resounding calls that resonate like kluit or klîp.

Biology –
The reproductive cycle of the Recurvirostra avosetta begins towards the end of March when these birds arrive in the places where they establish the nesting colonies, that is on the muddy or sandy shores of the places of water, and start the nuptial parade; this is recognized as the male and the female plunge the beak together in the water, then alternately shaking the plumage and accelerating the movements more and more, until exhausted, the female, bowing her head, complies with the wedding and the two birds make a quick run , towards each other.
Subsequently, from time to time, the couples gather in groups, which, arranging themselves in a circle, all perform together a rhythmic and harmonious dance, giving themselves great strokes of wings and legs and at the same time emitting raucous cries of excitement; these events continue throughout the nesting period.
The male of this species prepares, in the period of May, the nest, rotating on itself and resting the belly on the ground, so as to obtain a dimple that then lining with dried algae and shells.
The nests are placed next to each other in vast colonies; after which the females lay 3 to 5 brownish-yellow eggs speckled with gray, 50 × 33 mm in diameter, which are alternately hatched by both components of the pair for a period of 22-25 days.
During this period male and female are given the change of turn in the hatching with a complicated ceremonial made of bows and rhythmic sways.
The young, as soon as they are born, are covered with a brownish duvet and with the beak still short and straight; these come out of the nest as soon as their plumage has dried, led immediately by their parents away from the colony and trained to hunt in the water.
After 5-7 weeks of age, the young are able to fly and separate from the adults, who, nevertheless, meet again towards the end of July, when flocks prepare to migrate south.

Ecological Role –
The pied avocet is a typical shore bird that nests in muddy plains, lagoons and salt marshes around the coast, and sometimes in less saline areas, while outside the breeding season, their favorite shelters are sandbanks and slums, or the plains around the lakes and rivers. They are sociable birds and often they are observed in flocks of 20-30 heads even if it is not rare to see solitary specimens.
In these areas the diet is linked to the shape of the beak; in fact many use the long beak to probe in the mud and sand along the edges of the seas in search of small animals that live below the surface. These birds feed on small crustaceans, fish and molluscs, as well as seeds and other plant material that float on the shore. The birds are accustomed to wander through the slums with their beaks under water, and the front ends parallel to the surface; it is precisely in this position that the birds move forward, bringing the beak from side to side along a 50 ° arc.
The common avocet often feeds in groups, which can reach up to 300, striding through tight ranks.
Recurvirostra avosetta is a species threatened mainly by the destruction of foraging, nesting and wintering habitats due to the drainage and reclamation of brackish and saline lagoons, disturbance at nesting sites and poaching.
According to the IUCN this species is classified as «minimal risk» (Least Concern). In Europe the population is estimated to be between 30 and 55,000 breeding pairs. The countries in which it is most numerous are Denmark, Spain, Turkey and France (16,000 pairs), but it is also present in good numbers in Portugal, Greece and Italy.
The population of this bird, after the reduction of its range in Western Europe in the early twentieth century, has not stopped increasing since the 1940s, re-colonizing England and Sweden and annexing Belgium and Norway to its area nesting, most likely due to climate change.
Fortunately, even if the wetlands have suffered serious damage as a result of the use of insecticides, the pied avocet is able to adapt even to habitats that have suffered a certain drop in quality. Since 90% of European migratory avocets concentrate in less than 10 sites, effective protection of these places is absolutely essential.