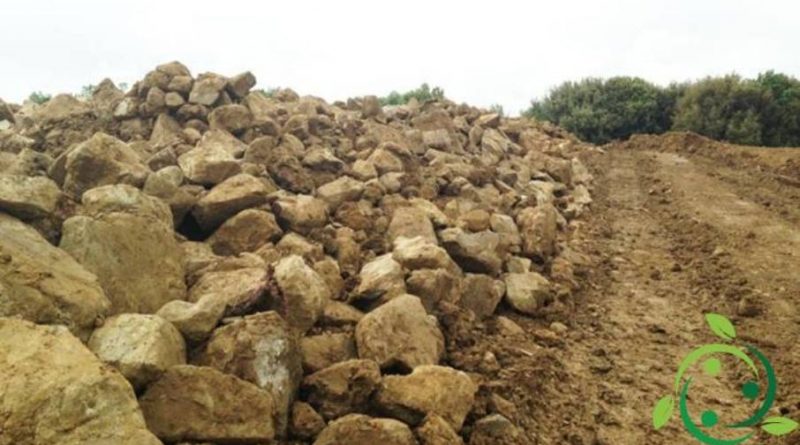 By agrarian wording, the term “stone milling” means processing carried out with specific machines in order to reduce the excessive presence of skeleton (stones of different sizes) on the surface or even in depth.
Stone milling is an extraordinary soil processing, carried out during the preparation of a natural land to be used for agricultural purposes.
The operation of the stone mill is part of the land reclamation and improvement works as it tends to eliminate the coarse skeleton, above all larger, which represents an obstacle for the mechanization of some specific cultivation operations.
The presence of larger stones hinders some agronomic operations; among these we remember:
– the sowing in rows, in particular the precision sowing, and the sowing in broadcuts with minute seeds;
– the complementary or cultivation processes carried out with discarding working bodies or stirrers moved by the tractor power take-off;
– mechanical harvesting performed with machines equipped with a mowing bar and picker reel.
The operation of the stone allows, therefore, to obtain more homogeneous surfaces and more accurate seed beds, to reduce seeding doses and failures, to increase the yield and precision of mechanical harvesting.
This operation is especially useful in herbaceous cultivation, especially in intensive agriculture with a high degree of mechanization, where cultivation requires a regular surface and homogeneous coverage, such as forage crops.
The stone is also useful in tree crops, especially when it is intended to use machines composed of rotary parts subject to easy wear, such as rotary hoes and mulchers.
The technique of stone reaping dates back to the mists of time and, through this operation, the stones were collected and accumulated for the creation of dry boundary walls or for terracing works.
In the past years the stonework was carried out mainly by hand; with this operation, the stones, starting from the larger ones, were removed manually each time they surfaced during the main processes and arranged in piles at the edges of the fields or used to make masonry works. This practice, operated until the middle of the last century, was gradually changed with the advent of specific machines.

Today, mechanical stone removal is performed with two different types of machines:
– Stone removing machines that carry out a mechanical screening of the ground up to a certain depth, making the stones emerge of a certain size and collecting them or arranging them in piles to be removed with other mechanical means;
– Stone remover machines that crush the surface skeleton up to dimensions that are compatible with the intended purposes. This operation can be performed only when the skeleton is composed of lithological elements derived from soft rocks (limestone, tuff, sandstone, etc.).
The technique of stone removal, which in the past responded to a gradual intervention and to improve the surfaces to be cultivated, with the advent of mechanization has become a practice, often abused and often without a more comprehensive evaluation of the intervention.
Intensive agriculture has in fact moved with criteria of economic convenience only of the interventions (including stone removal) without often assessing other long-term effects, which if not consistently assessed lead to difficult ecological problems.
Although in fact the elimination of a part of the skeleton can confer a series of advantages, of immediate economic return, in the long run it can involve considerable defects such as:
– the considerable lowering of the country plan, exposing the land to surface stagnation phenomena. Indeed, a local depression has an action of recalling both surface and subsurface runoff water from the surrounding lands. The risk is high in case of high skeleton presence: soils with 30-40% of skeleton can suffer a lowering of altitude of 10-15 cm if the skeleton is removed in the first 40 cm of soil;
– loss of coherence of some substrates which, in the absence of a skeleton, tend to suffer more from the erosive effects of atmospheric agents;
– decreased aeration of the surface layers of the soil with greater difficulty in absorbing the nutritive elements (such as above all iron and other microelements);
– variation of the circulation systems of surface and underground waters with often negative effects that can no longer be solved once the skeleton has been removed.
– variation of the microflora and microfauna of the soil with substantial modifications of the characteristics of the bio.