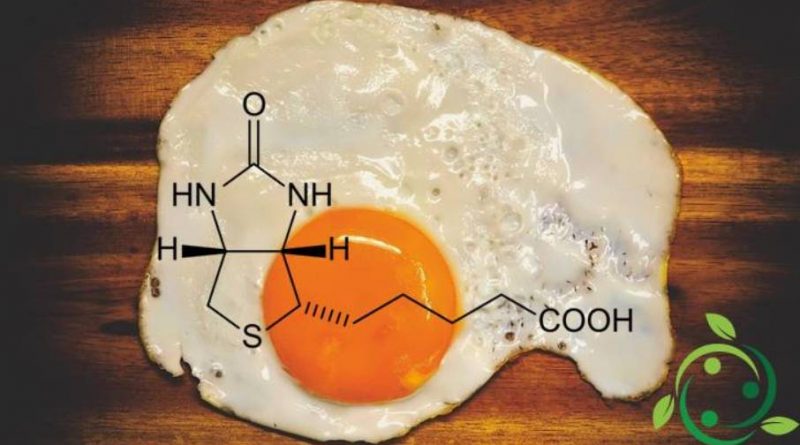 Biotin, whose term in the official IUPAC nomenclature is: acid 5 – [(3aS, 4S, 6aR) -2-oxoexaidro-1H-tieno [3,4-d] imidazol-4-il] pentanoic and whose brute formula or molecular is: C10H16N2O3S is known above all with the name of Vitamin B8 or Vitamin H.
From the chemical point of view, biotin is a molecule in which two rings, a thiophene and an imidazolidinone, are condensed together. A side chain of valerianic acid is then attached to the thiophene ring.
From a physical point of view, biotin is soluble in water and in this state is resistant to heat, bases and acids; it decomposes instead by the action of ultraviolet light and strong oxidants.
Biotin was discovered following some studies concerning skin and growth alterations occurring in animals fed exclusively with raw egg white or proteins extracted from it. This factor, responsible for the so-called “white egg disease” was identified in 1931. Subsequently it was understood that biotin is indispensable for the correct growth of mammals. The underlying phenomenon of this pathology is linked to the link between biotin and avidin, an egg white glycoprotein. In fact, avidin is resistant to the proteolytic action of the gastrointestinal system, so that the link with biotin prevents the absorption of the latter.
Biotin is present in nature both in the animal kingdom and in the vegetable kingdom, but is also found in human and cow’s milk, in dairy products, in egg yolk and in seafood. Biotin is also produced in large quantities by intestinal bacteria.
In vegetables, biotin is strongly linked to proteins for which its bioavailability is lower.
In general, biotin is present in foods such as: chicken meat, cereals, liver, cheese, fresh and dried fruit, milk, legumes, brewer’s yeast, eggs, soya beans, vegetables (cooking and / or refining does not disperse any quantity).
The lack of biotin, a very rare factor, can occur in individuals who take large amounts of raw or soft-boiled eggs. In the cooked eggs instead the heat of the cooking denatura the avidina.

Other cases of deficiency have occurred in individuals fed only parenterally. In addition, the administration of high doses of sulfonamides also appears to cause biotin deficiency due to the massive alteration of the bacterial flora that may occur. Biotin deficiency in adults can give rise to cutaneous manifestations (desquamations).
A deficiency can lead to mood decline, fatigue and muscle pain.
As for any excesses, toxicity phenomena due to high biotin intakes are not known. In fact, given that biotin is present in many foods and that intestinal bacteria can produce high quantities, it is not at present very clear what the recommended intake levels may be. In fact, the different sources are currently not in agreement and report highly variable levels in the range of 30-100 µg per day.
Biotin plays important biochemical roles. It is fundamental for the synthesis of fatty acids, amino acids and glucose, for a good and healthy psycho-physical growth and against aging. It also regulates the production of hemoglobin by influencing the transport of oxygen in the blood.
Biotin plays the role of cofactor of several ATP-dependent carboxylases. It is linked to the active site of the enzyme via a peptide bond that forms between the carboxyl group of valerianic acid and an amino group of a lysine residue. The carboxylation reaction, in which biotin intervenes, involves the transfer of a CO2 molecule from a donor to an acceptor, passing through an intermediate in which the vitamin sets the CO2 on one of the nitrogen atoms of the imidazole ring, thus forming carboxibiotine.
The formation of carboxibiotin occurs through the use of bicarbonate, magnesium ions and ATP. In fact bicarbonate binds CO2 to itself through a reaction requiring energy, provided by the hydrolysis of an ATP molecule. The carbonase phosphate creatase molecule then releases CO2 to the biotin, hydrolyzing the phosphate group.
Biotin is used in humans by four carboxylases:
– pyruvate carboxylase, for the transformation of pyruvate into oxalacetate and therefore for the resynthesis of glucides;
– propionyl CoA carboxylase for the transformation of propionyl-CoA into methylmalonyl-CoA;
– methylcrotonyl carboxylase;
– acetyl-CoA carboxylase to transform acetyl-CoA into malonyl-CoA, important in the synthesis of fatty acids.