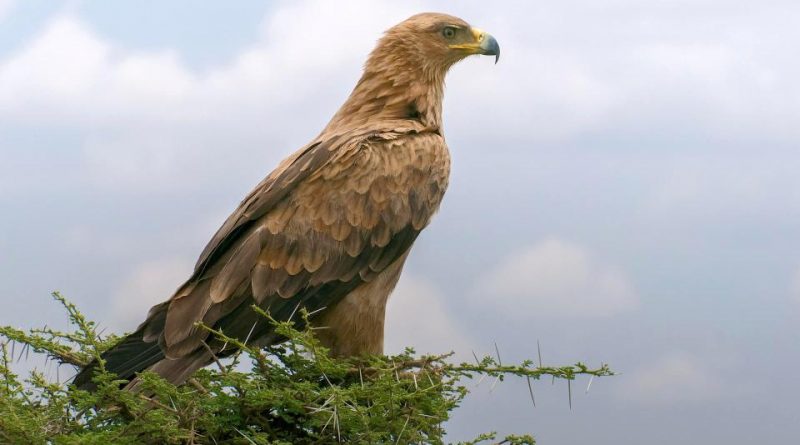 The Tawny Eagle (Aquila rapax (Temminck, 1828)) is a bird of prey belonging to the Accipitridae family.

Systematics –
From the systematic point of view it belongs to the Eukaryota Domain, Animalia Kingdom, Phylum Chordata, Aves Class, Accipitriformes Order, Accipitridae Family, Aquilinae Subfamily and therefore to the Aquila Genus and to the A. rapax Species.
Three subspecies are recognized:
– A. r. belisarius (J. Levaillant, 1850) – present in Morocco, Algeria and southern Mauritania as far as Ethiopia and southwestern Saudi Arabia and to the south as far as R. D. of the Congo, Uganda and Kenya;
– A. r. rapax (Temminck, 1828) – widespread from southern Kenya and from the Democratic Republic of the Congo to South Africa;
– A. r. vindhiana Franklin, 1831 – present in Pakistan, India and Nepal.

Geographical Distribution and Habitat –
The Tawny Eagle is a widespread bird in sub-Saharan Africa and in India. This bird of prey is divided into three populations well separated from each other, with the first one living in North-West Africa (Maghreb), the second widespread in the African continent, from the southern regions of Kenya and the Democratic Republic of the Congo to in Angola, Namibia and South Africa and, finally, the third present exclusively in Asia where it is spread from south-eastern Iran to Burma, passing through India and Pakistan.
This bird, regardless of the area, is particularly common in open areas with the presence of acacias, in lightly tree-lined savannas, in the steppes and in the prairies where some scattered trees grow.
In Zambia they are also present in regions where large animals and cattle are found. In the Indian subcontinent, eagles occupy the arid plains dotted with vegetation, the drier forests and cultivated areas. Unlike in Africa, where they can be sighted even in mountainous areas, they remain confined to lowland and lowland regions. 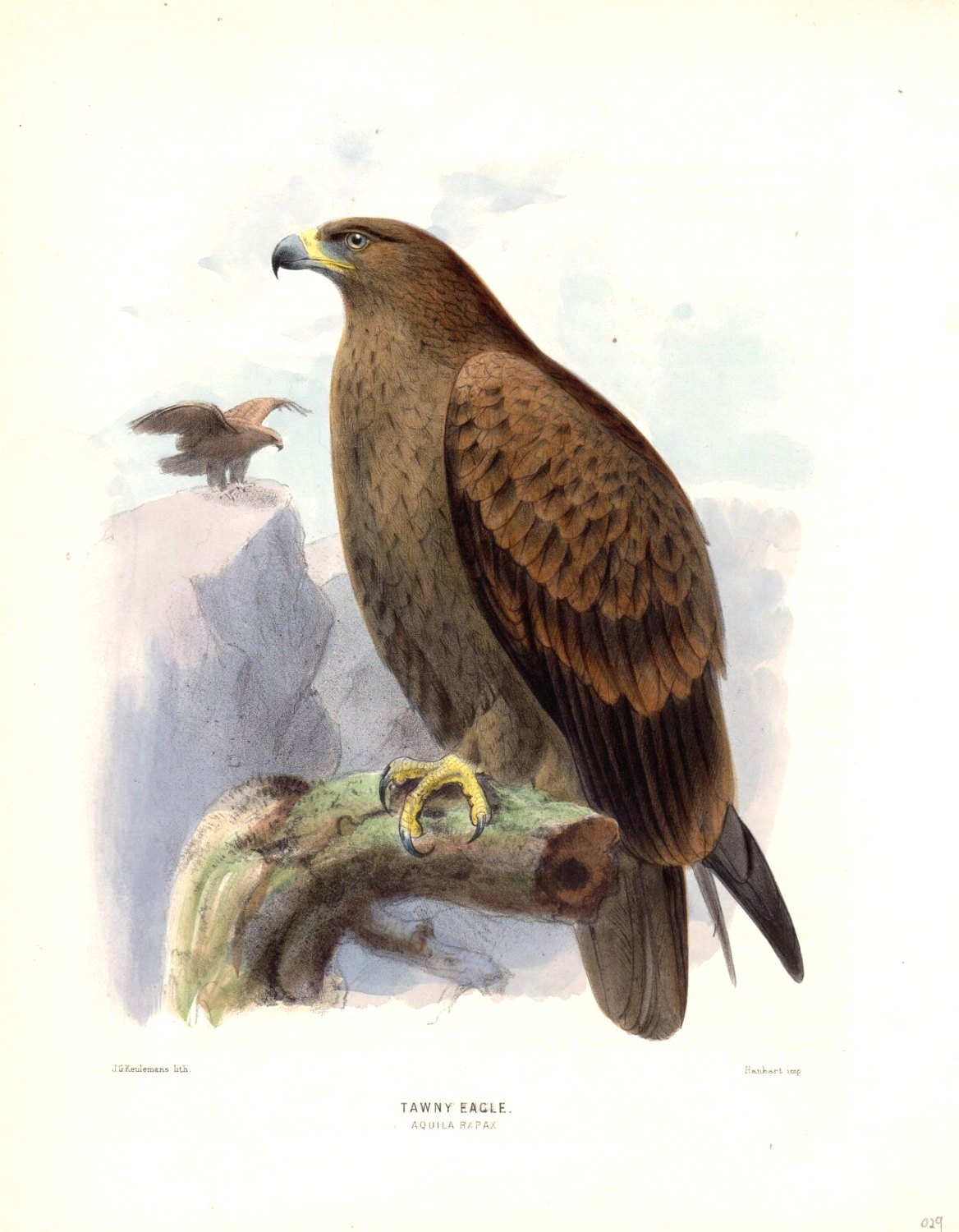 Description –
The Aquila rapax has a length of about 60-70 cm, with a wingspan of 160-185 cm and a weight that can oscillate between 1.6 and 3.1 Kg.
The adults present themselves with a non-uniform coloring, with a plumage that, leaving out the various phases, presents itself with different shades from dark brown to light brown.
Particularly showy and characteristic are the darker individuals as they exhibit a beautiful tawny shade that is not present in any other species of eagle.
The remiges and the tail are blackish, while light lines and stripes adorn the wing coverts.
In the lower part of the back we find a clearly lighter color than the rest of the livery.
The iris is brown and the beak is yellow with a black tip.
This bird has a certain sexual dimorphism with females much larger than males but with plumage is identical.
The younger and immature individuals of the first year have a less contrasting plumage than that of their parents, which is very clear, almost whitish, especially on the lower parts.
The Aquila rapax is a normally silent bird except in cases where it is annoyed or during nuptial parades.
They can also shout during their acts of parasitism to the detriment of other species and the females when they are in the nest make calls to claim the food.
The cry is described with the rude verse: kwok kwok.

Biology –
The Tawny Eagle, excluding the nesting period, is a very gregarious bird.
In the presence of abundant food sources these birds form large gatherings that can be composed of at least twenty individuals, except in the Ethiopian region where it is rare to spot more than two or three together.
In general, they spend most of their day near pools of water where they can quench their thirst in peace. During the day, especially when there is heavy rainfall, the eagles are perched on the trees, otherwise, in the presence of sunny days, they rise in flight, especially if the thermal currents favor their gliding technique.
Like most other eagles, these birds of prey have a daytime activity.
The eagle rapax pair, which establishes a lifelong bond, occupies the same area of ​​influence for several consecutive years and sometimes even for more than a decade.
The various pairs have rather spaced out territories and any overlap is strictly impossible. Normally their surface varies from 25 to 100 square kilometers, with a greater frequency between 35 and 55 square kilometers.
The phase before mating is recognized as the male performs a wavy flight, after which the two partners glide together. In the most crucial moment of the parade, circular flights can be observed, alone or in pairs, above the site of the nest. The male can therefore make descents in dive and the female can turn around him and present the claws, which he can tighten with his own. Mating always takes place near the nest or inside it.
After which the female lays an average of 2 eggs and the incubation lasts about 45 days.

Ecological Role –
The Tawny Eagle is a very opportunistic predatory bird that feeds on everything they can find.
The diet of this bird is however exclusively carnivorous; this is represented by a wide range of small mammals (mainly rodents), birds (especially gallinaceous), reptiles, insects (including termites) and carrion of all types.
These birds regularly frequent the edges of roads to take advantage of the animals left killed by collisions with vehicles, and also practice cleptoparasitism against other species of birds of prey, particularly juggling hawks. They also come close to homes, where they regularly search the garbage cans. The rapacious eagles hunt starting from the perches, chasing their victims in the air and eventually walking on the ground.
In certain situations they are seen gathering in large numbers around the bush fires to catch the animals fleeing in panic.
This bird is a great predator, managing, as happens in Kenya, to kill small antelopes that weigh twice as much.
The vast majority of the populations of this bird of prey, both in Africa and in Asia, are sedentary. However, after being dispersed from the family group, the young people make short trips outside the nesting area.
From the point of view of its diffusion, even if for some time it has been suffering a rather significant decline in South Africa, it is a bird still quite widespread throughout its territory, including the Indian subcontinent.
The decline of the Aquila Rapax populations is linked to phenomena of accidental or intentional poisonings, firing of firearms or drowning in rainwater tanks. Often, during their attempts to hunt along roadsides, these birds of prey remain killed.
Currently the total global population is estimated at around 100,000 individuals. In 1990, in South Africa, 5000 breeding pairs were registered, but this number is decreasing.