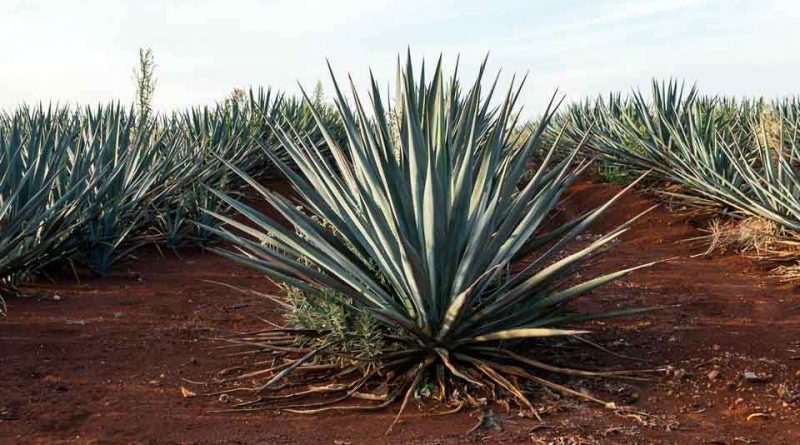 The blue agave (Agave tequilana F.A.C.Weber, 1902) is a succulent plant belonging to the Agavaceae family.

Systematics –
From the systematic point of view it belongs to the Eukaryota Domain, United Plantae, Magnoliophyta Division, Liliopsida Class, Liliales Order, Agavaceae Family and therefore to the Genus Agave and to the A. tequilana Species.

Etymology –
The term Agave comes from the Greek ἀγαυός agauόs admirable, glorious, illustrious, noble: for the spectacular appearance of the species Agave sisalana in bloom. In Greek mythology Ἀγαυή Agayé Agave, daughter of Cadmus king of Thebes and of Harmony, was the wife of Echion from whom he had the daughter Epirus and the son Penteo whom she herself killed, in a raptus aroused by the fury of Dionysian ecstasy
The specific epithet tequilana derives from the locality of Santiago de Tequila in the State of Jalisco in Mexico (from Tequillan or Tecuila that with the native Nahuatl meant place of tribute); in this place the famous brandy was created which bears its name, produced exclusively with Agave tequilana.

Geographical Distribution and Habitat –
Agave tequilana is a plant native to Mexico and very common in tropical climates.
Today it is also widespread in the Mediterranean basin where it is used to adorn lush gardens.
The ideal habitat of this plant is that of the tropical climate at altitudes above 1,500 meters where it grows in rich and sandy soils. However, the plant also develops well in temperate climates. 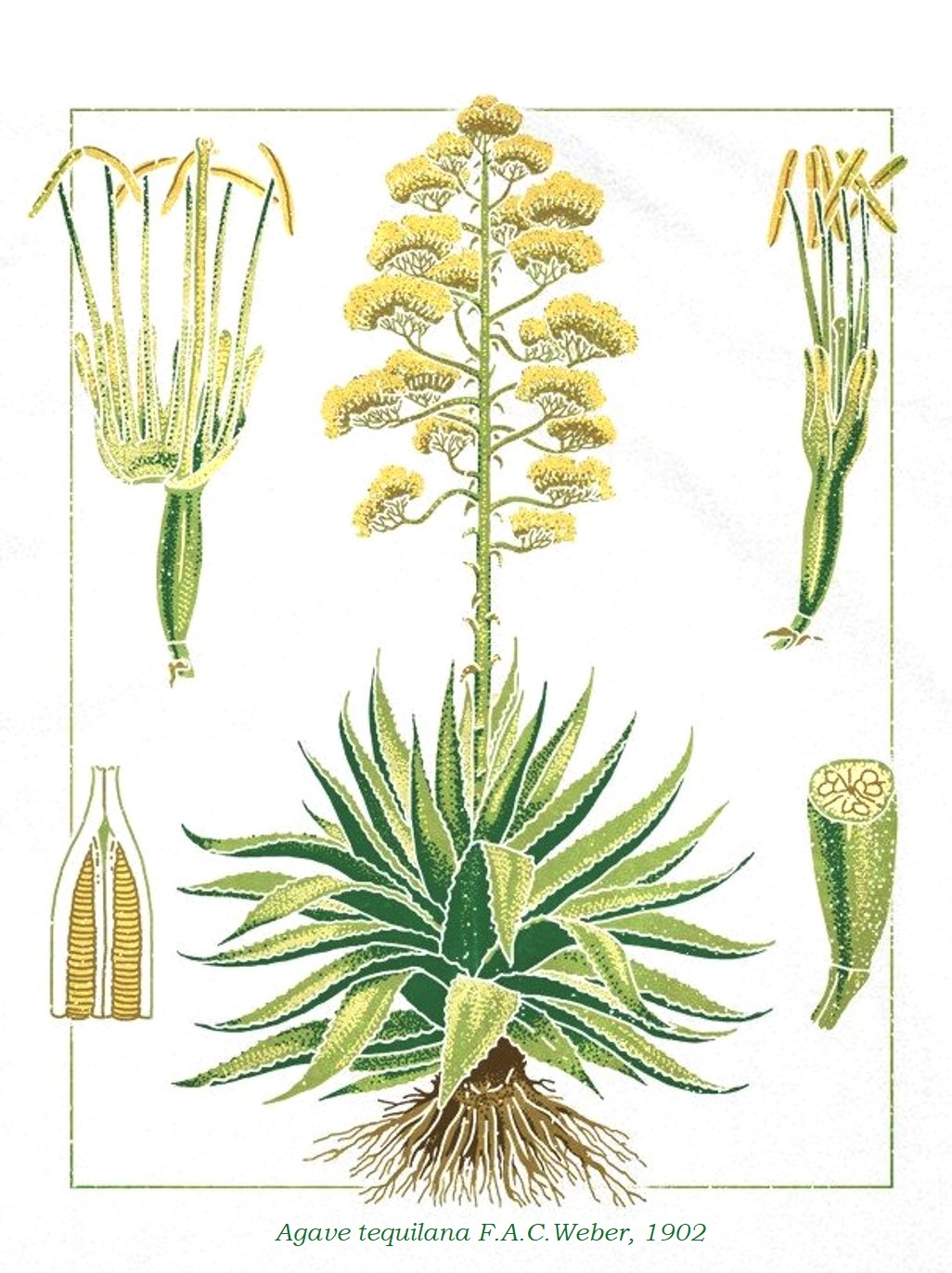 Description –
The Agave tequilana is a succulent plant characterized by a rosette from which branch the fleshy, greenish, watery leaves which, if cut, have a gelatinous structure; at the top of the leaves and laterally there are some spines.
This plant blooms around 7 – 10 years, producing an inflorescence up to 5 meters high, with yellow flowers that, generally, when the dried fruits ripen.

Cultivation –
For the cultivation of blue agave, consider that its habitat is that of the desert where the plant accumulates reserves of the precious liquid which it will then exploit in periods of drought. Its life cycle is about 8-10 years at the end of which it produces an inflorescence on top of a long stem. However, it can be grown in temperate climates, especially in sandy, very drained soils, but considering that it suffers from winter frosts, so if you want to cultivate it in cold climates you must protect it.
In Mexico, the farmers, after having planted it in vast areas, fertilize it for about 2-3 years. Since the ripening times of the plant vary from 8 to 10, around 3 years they cut the leaves to accelerate their growth. In this way, the maturation takes place earlier than in the natural biological cycle of the blue agave.
The flowers are pollinated by bats (especially Leptonycteris curasoae and Leptonycteris nivalis) which are endangered species and also by insects and hummingbirds and produce several thousand seeds per plant, many of which are sterile. The plant then dies. Sprouts on commercial plants are removed after a year to allow the heart to grow. The plants are then reproduced by planting these shoots; this has led to a significant loss of genetic diversity in the cultivated blue agave.

Uses and Traditions –
The Agave tequilana is an important economic resource of the Mexican state of Jalisco as it is the base for the production of tequila. Furthermore, this plant is the basis of the production of agave juice, used as a sweetener in place of sucrose.
The exploitation of the blue agave dates back to ancient times. Aztec priests consumed fermented agave juice. The effect of alcohol allowed him to reach intoxication during religious ceremonies. In reality, they entered a mystical dimension to bear the vision of the sacrifices made on people and animals. After the Spanish conquest the product was taken up and subjected to distillation obtaining the Mezcal. To refine it they adopted the same procedure as for wine. Tequila, on the other hand, as we know it today must follow a precise production disciplinary. It must be manufactured in Mexico and contain at least 51% blue agave distillate. There are various types depending on the age and method of aging. In the market there are products that contain the “gusano”, a worm typical of the plant.
Tequilana agave, inside its sap, has high contents in calcium, potassium, magnesium and iron. Vitamins A, B, C, D and K are also a good source of energy. The resulting syrup has a high mineralizing and restorative power. It does not reactivate insulin despite its sweetness. Fructose, in fact, is present in the percentage of 75%. For this reason its use is recommended for people with diabetes, always in controlled doses. The recommended is not to exceed 70 gr. per day of fructose. The use of juice as a sweetener in beverages such as tea, coffee and herbal teas helps lower fats in the blood. It has no aftertaste and does not alter the taste of food.
In general, however, the high production of sugars called agavine, mainly fructose, in the heart of the plant is the main characteristic that makes it suitable for the preparation of alcoholic beverages.
Unfortunately, due to the industrial-scale cultivation of this plant since the late 1980s, diseases and parasites, collectively referred to as TMA (tristeza y muerte de agave, “withering and death of the agave”), hit the crops. Later in the ’90s diseases spread, in particular Fusarium fungi and Erwinia bacteria, exacerbated by the scarce genetic diversity of agave plants. Other parasites include: the agave weevil, Scyphophorus acupunctatus and a fungus, the Thielaviopsis paradoxa.
In temperate countries this plant is cultivated mainly as an ornamental plant.

Preparation Mode –
Tequilana agave is cultivated for the extraction of the juice obtained from the processing of plant sap.
When the plant reaches maturity, the sap is taken. The latter, after being filtered, is subjected to heating by which carbohydrates are transformed into sugars with a process called hydrolysis. Then a second filtration is carried out to obtain the juice that will present itself with a consistency similar to honey but with greater fluidity.
The most typical and famous product of this plant is the tequila which is produced only from a specific cultivar of agave tequilana called “Weber Azul”. This cultivar is larger and blue-gray in color than the normal A. tequilana smaller and green. The tequila is produced by removing the heart (piña) of the plant in its seventh-fourteenth year (depending on the growth rate). The piñas collected weigh 40–90 kg. This heart is stripped of its leaves and heated to convert inulin into sugars. Then the toasted core is pressed or crushed to release the clear sugary liquid called aguamiel, which in turn is fermented and distilled in alcohol. The tequila is also produced with a formulation that contains 51% agave sugar and 49% other sugars.