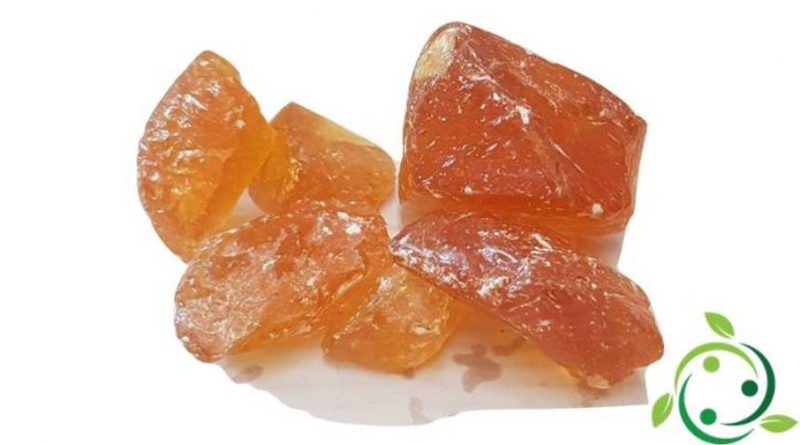 Colophony, also known as Rosin, Greek pitch, violin resin, rubber resin, is a vegetable resin that has a solid consistency and a yellow ocher color, transparent. This resin takes its name from the ancient Ionian city of Colophon.
Rosin is the residue of turpentine distillation.
Its code as a food additive is: E915.
From the chemical point of view, rosin is made up of about 90% of resinic acids and 10% of neutral matter.
About 90% of the resin acids are abietic acid (C20H30O2) and the remaining 10% dihydroabietic acid (C20H32O2) and dehydroabietic acid (C20H28O2).
From a physical point of view, rosin is presented as a transparent resinous mass, with a color that can vary from pale yellow to dark amber, from translucent and fragile fragments at room temperature; moreover it has a slight taste and smell of turpentine and melts easily if heated. Rosin is also insoluble in water but has a high solubility in ethanol, ether, acetone, chloroform, turpentine essence, acetic acid, benzene, alkaline solutions and in general in organic solvents.
It has a specific gravity ranging from 1,045 to 1,108, a melting point between 70 ° and 135 ° depending on the preparations and types used.
Rosin is used in the manufacture of paints, soaps, adhesives, caulking pitch, lubricants, inks, sealing wax, for electrical insulation, as a deoxidizer in tin welding and in the textile industry to obtain non-creasable fabrics, linoleum.
It is also used in classical dance as a non-slip on which to pass the shoes, both pointy and half-pointy. It is also used to practice certain types of aerial sports, such as pole dance or aerial tissue.

It is also used to obtain the friction of the bow on the strings of string instruments.
In ancient times it was used to make theatrical masks.
Rosin is mainly used in the form of derivatives: alkaline salts of resin acids added to soaps, manganese salts used as driers; esters that can be incorporated with bakelites.
Use of rosin is allowed in Europe in the form of compounds such as rosin esters, in the stabilization of soft drinks, vegetable and emulsified oils in which flavors and aromas are dissolved. This ensures that over time the emulsion does not separate from the aqueous fraction to form a less dense upper phase.
It is also used to compose a viscous substance by capture: mixed with linseed oil and boiled for a couple of hours, it hardens giving rise to a viscous substance.
It should also be remembered that rosin, together with potassium and lactose chlorate, is one of the components that are properly mixed to burn the papal election sheets in the stove which, from the Sistine Chapel, announces, with white smoke, the election of the new Pontiff.
It is emphasized that rosin can give rise to allergic contact dermatitis and occupational asthma in welders and musicians, of tubarites. Acute contact dermatitis can also cause bruising of the legs.
Rosin is mainly produced in the countries of South East Asia and China.