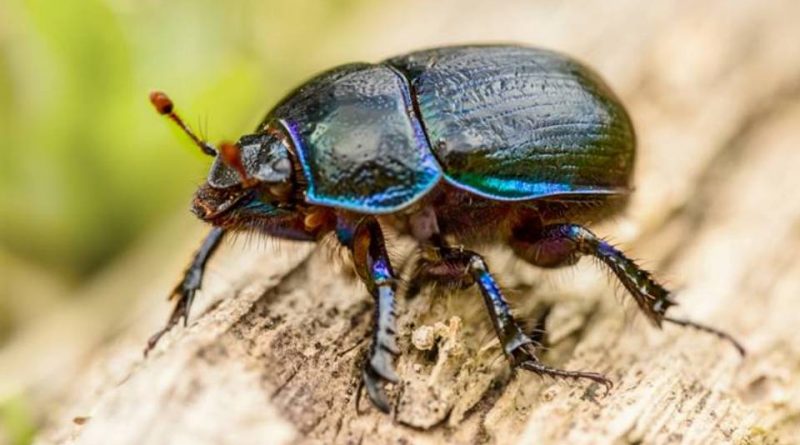 The Dor Beetle (Geotrupes stercorarius L., 1758) is a beetle belonging to the Geotrupidae family.

Geographical Distribution and Habitat –
The Dor Beetle is a beetle that lives mainly in the pastures and woods where it is easier to see it in the period from April to October.
These beetles dig a nesting tunnel under the dung they cover the nest to feed the larvae. Their reproduction habitat in the woods is also represented by decomposing mushrooms or plants.
It is present in Europe and was introduced in the United States.

Morphology –
Geotrupes stercorarius is up to 2.5 cm long and has a dark and shiny exoskeleton that can sometimes take on a bluish sheen.
The shape of the body is very compact, roundish, arched upwards. The head is flattened. The antennas are short.
The hind legs are proportionally long while the front ones are robust and toothed and have an excavator function. On each paw there are numerous spikes.
On each elitra seven long rows of points are barely visible.

Attitude and biological cycle –
The events that precede the biological cycle of Geotrupes stercorarius begin in autumn when the couple is dedicated to preparing the nest, digging a vertical tunnel in the ground that can be up to 50 cm long; the female then adds several horizontal side tunnels, each ending with a large chamber.
Inside each room excrement is inserted, leaving only a small space in the bottom where an egg will be laid: these droppings represent an abundant nourishment for the larvae that will be born.
The development cycle of this beetle lasts 2 years and the new adults are ready in July, but winter in the underground cells, only to come out of it the following spring.

Ecological Role –
The Dor Beetle is a beetle is coprophage as it feeds on the excrements of herbivorous animals and therefore it is found wherever they are kept above all of cattle breeding. In the evening, they can be observed on the ground near the grazing animals. Characteristic is the chirping crackling that they make with the hind legs.
Although the term Stercorario refers to the Geotrupes stercorarius with this name other scarabs can be indicated such as:
– Circellium bacchus;
– Scarabaeus sacer;
– Scarabaeus semipunctatus.
Most of these beetles are of considerable ecological importance as they bury large quantities of excrement deposited by large herbivores, thus increasing soil fertility, but above all eliminating possible sources of pathogens.
On the other hand, the possible damage to crops due above all to excavation is scarce and sporadic, on land where manure fertilization was carried out.