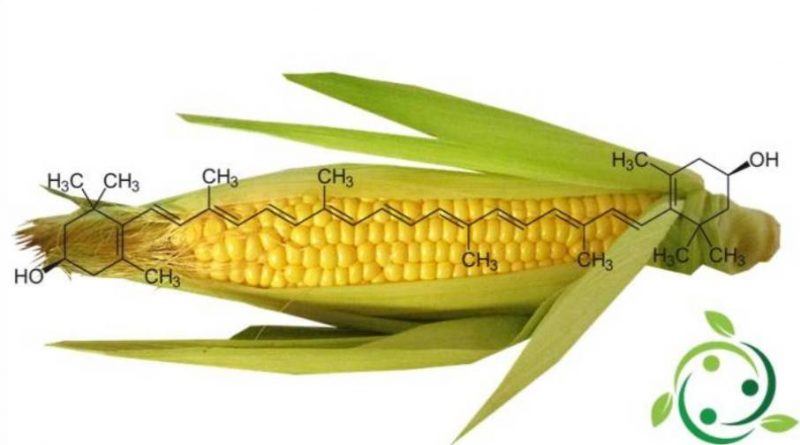 Zeaxanthin whose term in the official IUPAC nomenclature is: 4- [18- (4-hydroxy-2,6,6-trimethyl-1-cyclohexyl) -3,7,12,16-tetramethyl-octadeca-1,3, 5,7,9,11,13,15,17-nonaenyl] -3,5,5-trimethyl-cyclohe-3-en-1-ol is a carotenoid pigment whose brute or molecular formula is: C40H56O2 and is coded also with the initials E161h.
Zeaxanthin is a pigment that is produced in algae and in some plants by hydroxylation of β-carotene present in the egg yolk. It has no vitamin A activity.
This pigment takes its name from the Zea mays, the common maize and is, together with the carotene, responsible for the color in the corn grains, in the egg yolk, it is also found in the red peppers, in the mango and in the orange juice in quantity medium; larger quantities are present in plant foods such as spinach, broccoli, red radicchio, green peas, watercress and others.
In its natural state there is also an isomer which is lutein which differs in the position of some double bonds and because it has three stereocenters against the two present in zeaxanthin. The most widespread isomer in nature is (3R, 3’R), followed by (3R, 3’S) while the isomer (3S, 3’S) is scarcely present. The isomers (3R, 3’S) and (3S, 3’R) are identical and therefore constitute a single molecule called meso-zeaxanthin.

The major properties of zeaxanthin are related to its ability to absorb excess solar radiation that would interfere with photosynthesis because an excess of solar radiation would cause damage to plants similar to those produced by burns or the absence of water.
Zeaxanthin or E161h, is a substance recognized as a natural yellow-orange dye, a carotenoid of the xanthophyll class, but more oxidized than carotene.
According to some studies, an optimal intake of zeaxanthin would contribute to good eye health. In particular, zeaxanthin would support the welfare of the retina and especially of the macula (the central area of ​​the retina of the human eye, the most sensitive to light stimuli) and of the fovea (concentric region within the macula). Zeaxanthin would help keep the retina healthy by stabilizing the retinal membranes, helping to make them more resistant to light damage. Zeaxanthin (together with lutein) is accumulated in the healthy macula and helps to maintain the integrity and health of this part of the retina essential for optimal visual performance.
Other studies would recognize zeaxanthin, given to individuals at risk of developing age-related macular degeneration, to prevent, over a five-year period, vision loss in more than 300 thousand people over 55 years of age. The intake of zeaxanthin would also improve vision in patients already suffering from macular disease. Finally, according to other research, the intake of zeaxanthin would also be preventive against the risk of developing age-related macular degeneration.