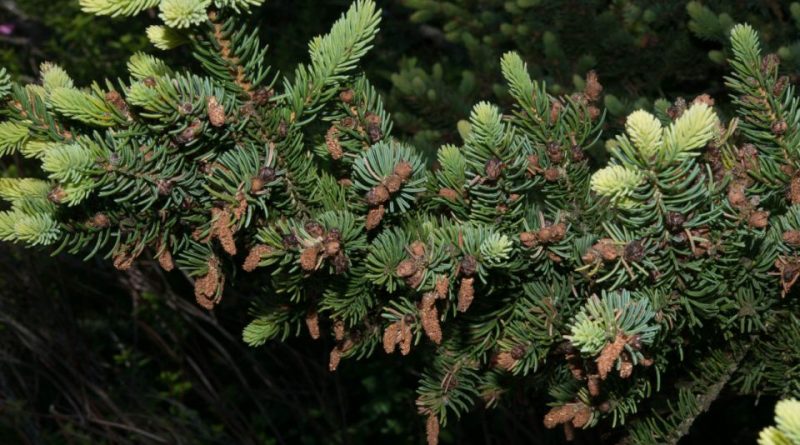 Etymology –
The term Abies comes from the classical Latin Abies, in Virgil, Egloghe, from the Sanskrit root abh to gush, for the resin.
The specific balsamea epithet comes from the Greek βάλσαμον, balsam, with reference to the resinous substances of this species, used for the production of the balsam of Canada.

Geographical Distribution and Habitat –
The Balsam fir is a species of North American origin and especially of central and eastern Canada (from the island of Western Newfoundland to the central part of Alberta) and of the north-east of the United States (from eastern Minnesota to Maine, and to the south from the Appalachian Mountains to West Virginia).
This plant is present in Canada (Alberta, Labrador, Manitoba, New Brunswick, Nova Scotia, Ontario, Prince Edward Island, Quebec, Saskatchewan) and the United States of America (Connecticut, Iowa, Maine, Massachusetts, Michigan, Minnesota, New Hampshire, New Jersey, New York, Pennsylvania, Vermont, Virginia, West Virginia, Wisconsin).
The typical habitat of this plant is represented by forests with mild summers and long winters with very cold temperatures, where it resists up to -40 ° C, of ​​the boreal climate. The plant grows from sea level to north, at an altitude of 1,700 m in the south, in ares with rainfall ranging from 250 to 1250 mm.
Abies balsamea often forms mixed woods in association with Pinus strobus, Tsuga canadensis, Pinus banksiana, Populus tremuloides, Fagus grandifolia and Betula alleghaniensis.
The presence of Taxus canadensis is typical of the undergrowth. 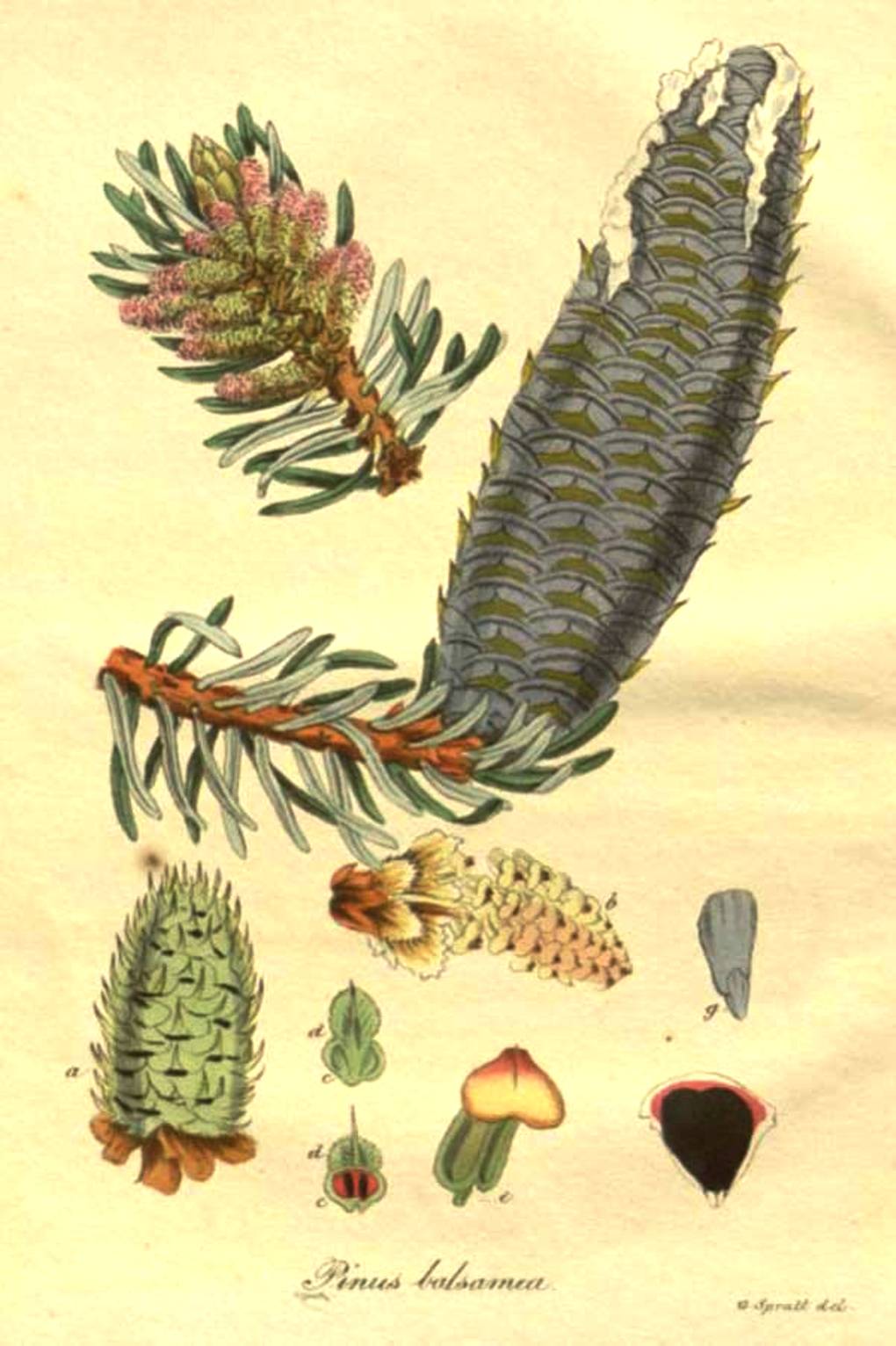 Description –
Abies balsamea is a medium-sized fir tree that reaches an average height of 14-20 meters and can even exceed 25 m in certain cases, characterized by a narrow conical crown.
It has a bark that is smooth, gray, and with bladders of resin (which tends to leak out when these are broken) in young trees and which in rough trees becomes rough and cracked or scaly.
The leaves are flat needles 15-30 mm long, dark green on the upper part, often with a small patch of stomata near the tip, and two white stomatal bands on the lower part, with a slightly serrated tip. The needles are arranged in a spiral on the shoot, but with the bases intertwined almost to form two horizontal rows.
It has masculine strokes that emit pollen of various colors that can range from red, orange, purple to bluish-greenish.
The female cones are erect, 40 to 80 millimeters in color ranging from dark purple to brown when ripe and hatch in September to free the winged seeds.
Seeds that are 6 mm long and 3 mm in diameter have a light brown color. The cotyledons, at germination, are 4.

Cultivation –
For the cultivation of balsam firs it is necessary to be in areas with climatic characteristics similar to those of origin of this plant; therefore with summers that are not excessively hot and winters even rigid. The plant can be grown both in full sun and, especially in the younger age, in the presence of other plants that shade it.
The soil must have a tendentially acid pH and well drained substrates.
Like other fir trees, it should not be pruned, while for fertilizing it should be provided only during the planting stage, bringing well-humified organic substance directly into the hole.
Irrigation should also be carried out in the early times until its root system alone will provide for the plant’s needs.

Uses and Traditions –
The Abies balsamea is a plant that, in its areas of origin, is useful in silviculture, both as a wood plant and as a paper, but it is especially appreciated for its resin: suitable as a glue for glasses, optical instruments and microscopy, it is the same resin used by the native Indians in the preparation of baskets intended to collect the sap of the sugar maple (Acer saccharum, which lives in the same regions).
This plant, commercially known as balsam of Canada, due to its resin which is a traditional remedy for colds (it is “balsamic” by definition). For centuries it has been used in traditional Native American medicine as an antiseptic; currently its use in modern phytotherapy has lapsed.
Wood, although of modest size, is worked to be used in construction, and cellulose is used for paper making.
It is also used in the preparation of incenses, ecological deodorants and repellents for mice. But what is most striking is that the balsamic fir had the same meaning with native Americans as it had – and has – with the peoples of Northern Europe; that is, that of a solstitial tree, a tree around which to spend the longest night of winter, a tree to be decorated with propitiatory objects for the coming year. Here was the spruce, from them the balsamic fir, and so it is for those who today celebrate Christmas, both here and there.
For this reason, balsamic fir is very popular as a Christmas tree, especially in the northeast of the United States.
This plant is recognized as a variety which is the Abies balsamea var. phanerolepis (balsamic fir tree bracteate or Abete of Canaan) – provided with bracts that subtend larger seeds, visible on the closed cone.
This variety is endemic to restricted mountain areas of West Virginia. The common name “Spruce of Canaan” derives precisely from one of its native locations, the Valley of Canaan northeast of Elkins (West Virginia). Some botanists in the past have considered this variety as a natural hybrid between the balsamic fir and the Fraser fir (Abies fraseri), but currently this interpretation is not accepted in taxonomy.
The Abies balsamea is a species that, among the North-American ones of the genus Abies, which has the widest range; no specific threats are reported and therefore it is classified as a non-endangered species on the IUCN Red List.

Preparation Mode –
Balsam fir, as mentioned, was once used, as an antiseptic, in traditional Native American medicine; currently its use in modern phytotherapy has lapsed.
Currently, however, it is also used in the preparation of incense, ecological deodorants and repellents for mice.