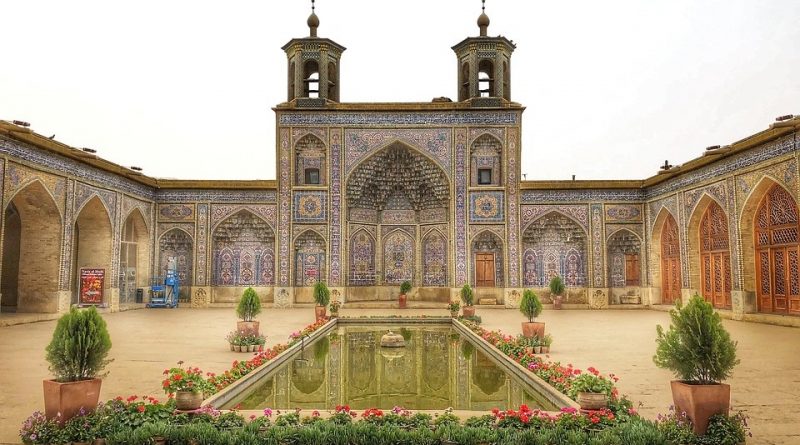 Iran (Persian: إيران, [iˈrɑːn]), which is officially the Islamic Republic of Iran and which was known as Persia, is a state of Asia located at the eastern end of the Middle East.
The capital of Iran is Tehran, it has a population of just under 8,500,000 by 2018.
Iran is a state where different ethnic groups coexist which are: Persians, Azeris, Kurds and Luri.
Iran is a region of ancient civilization whose first archaeological finds, such as those found on the site of Kashafrud and Ganj Par, demonstrate the presence of human settlements as early as the Lower Paleolithic.
The territory of Iran, which is the eighteenth largest in the world, is 1,648,195 km².
Iran shares borders with Azerbaijan, Armenia and Turkey to the north-west, with the Caspian Sea to the north, with Turkmenistan to the northeast and east with Turkmenistan and Afghanistan, to the southeast with Pakistan and the Gulf of Oman, to the south with the Persian Gulf and the Strait of Hormuz and finally with Iraq to the west.
From a geographical point of view, Iran is established in much of the Iranian plateau, with the exception of the coasts and the Khūzestān region.
Iran is one of the most mountainous countries in the world, with the landscape dominated by mountains, vast plateaus and mountain ranges, which separate the various river basins and the few plains. The most mountainous area is west to north-west and is crossed by the Caucasus chain and the Zagros mountains, with the top of Zard Kuh as the highest point at 4,548 meters. To the north of the country and south of the Caspian Sea is the highest mountain range in the country, the Elburz mountains, with the highest peak on Mount Damavand at 5,610 m asl, which is also the highest mountain in Eurasia to the west of the Hindu Kush.
From the climatic point of view, Iran is characterized by different conditions, due to its considerable extension: this goes from cold and rigid winters (from December to February) in most of the country, while in summer (from June to August ) temperatures up to 48-50 ° C are to be considered normal. Regular rainfall is mainly limited to the northernmost and westernmost zones of the country, which are generally also the coldest regions.
The western area is the coldest and one of the most humid in Iran. Here, between December and February, temperatures well below zero are very common. Snow is often present until the beginning of spring (in the mountains even longer). The same condition is found in the area of ​​the Caspian Sea which is the region that extends north of the chain, of Elburz, where there are rather abundant rains, with an annual average of about 1300 mm. Here the winter is more temperate than in the rest of the north. Thunderstorms are very frequent.
Moving on to the province of Tehran, the climate is decidedly dry. In the city the summers are hot, dry and not at all breezy, but the hills at the foot of Elburz are cooler. Winter can be very harsh, especially at night, although usually all traces of snow disappear in early March. Between November and mid-May the showers are quite frequent.
Different is the condition of the central areas of Iran, which are very hot in summer and the temperature increases as you move towards the south and is only mitigated by climbing at high altitude.
Rainfall varies from area to area, but rarely does the average much exceed about 250 mm a year. In the period between the beginning of May and the middle of October, southern Iran and the Persian Gulf coast have scorching temperatures (usually up to 50 ° C), with a very high humidity level. The average annual rainfall (mostly winter) is around 150 mm. Moving away from the Persian Gulf, temperatures drop slightly: summers are hot and dry, winters are mild, even dry. There is very little rain and very little frost.
From the ecological and naturalistic point of view in the north of the country we find dense and rainy forests of which 10% are within areas protected by national parks; the remaining 50%, unfortunately, suffered serious damages due to exploitation and intensive agriculture. These extend across five different Iranian regions: the north of Khorasan, the Golestan, Mazandaran, Gilan and Ardabil. The Elburz range collects the humidity of the Caspian Sea, which then flows in the form of heavy rainfall during the autumn, winter and spring. These precipitations range from 900 mm to 1,600 mm per year. The forests thin out going south.
The central and southern part of Iran is different, being mostly covered by steppes, semi-steppes or semi-arid regions. The central-eastern part of the country is covered by the Dasht-e Kavir (literally “immense desert”), which is the largest desert in the country, followed further east by the Dasht-e Lut and several salt lakes. These deserts have been formed because of the very high surrounding mountain ranges, which do not allow sufficient amounts of rain clouds to reach these regions. 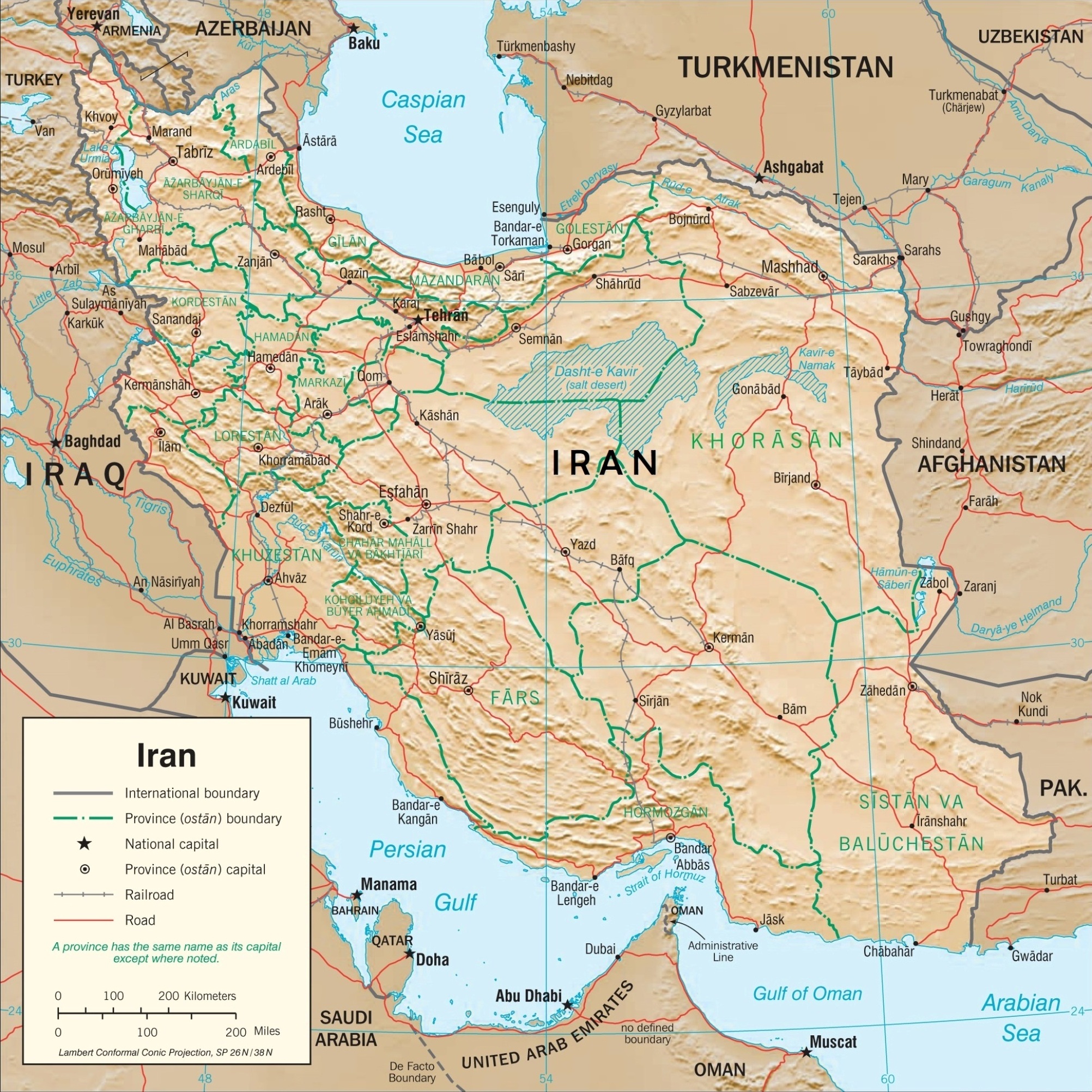 Flora –
Despite the presence of large deserts, intensive agriculture in large areas and large population centers, Iran is still home to more than 8200 plant species, 2000 of which are endemic. The northern slopes of the Elburz range are covered up to 2500 m of altitude, by dense deciduous deciduous forests, which make this area the largest green lung in the country. Here there are both trees similar to those typical of European forests (oaks, ash trees, pines, poplars, willows, walnuts, maples and elms), both a less common species, the Caucasian walnut (Pterocarya fraxinifolia).
The most interesting wooded areas are those around Masuleh, in the Golestan National Park which opens to the east of Minudasht, and Nahar Khoran, just south of Gorgan and more easily accessible than the others. On the higher slopes of the central and north-western Zagros Mountains there are forests, smaller and sparse, of oaks and junipers.
To the south the aspect of the landscape changes completely. Here the southern and eastern regions of Iran are almost completely bare of vegetation. Especially in spring, however, in some valleys sunk at the foot of totally barren hills shining unexpectedly green strips, such as the 20 km long known as “jungle of walnuts”, in Bavanat. Palm trees grow in the southern coastal plains, especially near the Strait of Hormuz, where groups of nomadic shepherds go back and forth between the warm areas along the sea and the cooler areas of the hills, taking advantage of the seasonal pastures for their animals. But the most amazing spectacle is that offered by the luxuriant oases that suddenly break the absolute aridity of the deserts. Here, where temperatures can reach 50 ° C in summer, dozens of species of date palms thrive, often flanked by robust pomegranates and modest fields of watermelons and melons; the oasis of Garmeh is a typical example.

Fauna –
The fauna of Iran includes 158 species of mammals, about a fifth of which are endemic species. Among these we remember the big cats like the Persian leopard and the Asian cheetah, but even if they are less known, the numerous varieties of wild sheep, deer, gazelles and bears must be counted. Consider that the seven species of wild sheep present in Iran are probably the ancestors of today’s sheep and goats.
Among these animals there are species such as the urial (or Turkmen sheep), the Laristan mouflon and the Caucasus ibex, characterized by the long white “beard” and curved horns. Other interesting species of mammals are, for example, the remarkable Persian wild donkey, the chinkara (or Indian gazelle) and the Persian gazelle (or subgucerous), the maral deer and the Asian varieties of black bear and brown bear. Wild canids include wolves, jackals and hyenas, while wild boars, surprisingly numerous in Iran, are sought-after prey for hunters. These large mammals live mostly in the forests of the Elburz mountains, although the big cats, wild canids and gazelles are also found in the arid regions surrounding the two main deserts. In the eastern provinces of Kerman, Sistan va Baluchestan and Khorasan there are camels wandering in the deserts, but, despite their wild appearance, they generally belong to nomadic or semi-nomadic communities.
Interesting and still impressive is also the birdlife of Iran, which has over 500 species of birds, but among these only one – the terrestrial jay of Iran – is endemic. Among these we cite the Caucasus mountain pheasant, the Caspian tetraogal, the Radde sordone (Prunella ocularis) and some species of white wheat (Oenanthe ssp.).
In Iran there are also 22 lagoons protected under the Ramsar Convention which represent the stopping areas for migratory birds on the route between Europe and Africa. The assortment of water birds, especially ducks, is remarkable. Although their total number is much lower than some decades ago, it is estimated that there are still more than a million specimens present (for at least part of the year) in Iran. Among the migratory aquatic, we remember not only the greater flamingos, which once in spring were poured into thousands of specimens around the Lake of Orumiyeh, while today they are less widespread due to the increasing salinization of the waters, but also the mignattai and martin fishermen. . Other fairly common species are the black and white magpies, the marine jays, the green and brown bee-eaters, and the black and gray horns. Less common are the golden eagles (which are still present in the provinces around the Caspian Sea), the Indian lapwing, the desert partridge, the lanner and the sacred falcon (present above all in the province of Hamadan), and the vultures and brown kites that populate the central plateau and deserts.
Now let’s see the aquatic fauna of the seas of this country. Here we find a wide variety of tropical fish, swordfish, porpoises and sharks. The Caspian seal lives in the Caspian Sea, whose presence in an area so far from the open seas is still a mystery to science. The same waters also host numerous herds of sturgeons (which produce the famous caviar). Since the 1970s, however, the number of sturgeons has decreased by 90%, due to pollution and excessive exploitation, and in 2006 a United Nations body banned the export of caviar from four of the five states overlooking the Caspian Sea. The only exception is indeed Iran, which however is required not to exceed a predetermined quota and to export only the caviar produced by a particular species of sturgeon.