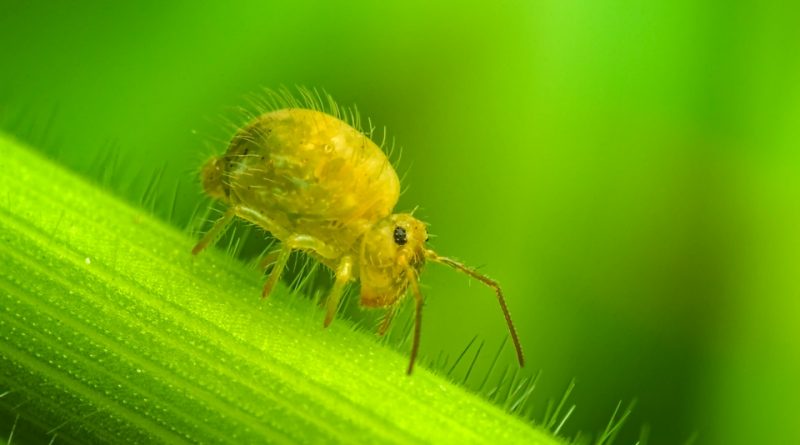 Geographical Distribution and Habitat –
The clover springtail carries out its biological cycle on plants such as: Soy, Alfalfa, Chard, Tobacco, Broad Bean, Vegetable and flower crops, and other herbaceous plants.
The species is native to Europe but is found today in any type of terrestrial habitat, to the point that its specimens have been found in Antarctica. It is present in Europe, North Africa, China and Japan. In the nineteenth century it was accidentally introduced into Australia and from here, at the beginning of the 20th century it was transported to South Africa. In Australia, where there are no antagonists, its population is significantly higher than in other countries.

Morphology –
Sminthurus viridis is a small insect whose adults measure about 2 mm in length. They have a globular yellowish body, covered with a sparse hair.
Males are smaller than females and have useful antennas to catch females during mating.
It has six legs, like the insects, which belonged to the previous classification and, similarly to the other collembola, it has no wings and has two ocelli. The body has the shape of two spheres attached to each other.
The fundamental characteristics that differentiate it from insects are two: the fork and the ventral tube, both composed of a pair of appendages fused together. The fork comes out of the fourth segment of the abdomen, in a ventral position. This organ allows the animal to jump very high, so, improperly, it was given the name of flea.

Attitude and biological cycle –
The biological cycle of this Collembola begins with courtship, after which the male lays a spermatophore, which is then used by the female to fertilize her eggs.
The females lay their eggs in groups of 40-60 eggs, preferably on dead leaves, which after depositing, cover with moist soil which they previously ingested and then emitted via the anal. The Sminthurus viridis winters like this at the egg stage, laid in small groups of some dozens of vegetation on the ground. In spring, in conditions of sufficient humidity, the eggs hatch. The hatching of the eggs takes place after a period of 26-42 days but, in conditions of high humidity, this period can be restricted to 8-10 days, which is why it is possible to have, over the course of a year, up to six generations.
After birth, the larvae undergo seven successive moults, during which they grow to reach the maximum size of 3 millimeters. The adult life of the Sminthurus viridis is about 15 days.
The alfalfa flea infests crops by attacking the cotyledons of the germinating seeds and the leaflets of the young plants.

Ecological Role –
The Sminthurus viridis carries out a parasitic action, as mentioned, against plants such as: Soy, Alfalfa, Swiss chard, Tobacco, Fava, Vegetable and flower crops, American vines, vegetables and other herbaceous plants. It can reduce the harvest by 50%. Its effect is particularly dramatic in Australia, where its predators do not exist.
The damage consists in the erosions carried out by the insect that gnaws the mesophyll leaving an epidermis intact. The seedlings, in a second time, appear so prickly because the residual epidermis is torn.
The nutrition of these animals is dependent on dead vegetable residues and fungal hyphae but can, in certain cases, change feeding behavior, turning into carnivores; in this case these specimens feed on the eggs of Pegomya hyosciami, a diptera that lives at the expense of beet, or they can attack other Collembola.
Generally, however, it does not cause damage to justify specific chemical interventions; a good preparation of the seed bed with a good water draining is normally sufficient to contain the infestation.
However, in soils infested with this parasite, it is advisable to avoid cultivating, as part of the rotation, the wheat immediately after the alfalfa, a rotation that creates an excellent environment for the proliferation of S. viridis, as it causes it to fall on earth a large quantity of leaves.
In the past, treatments using phosphoric esters or with chlorine derivatives were used which, although they appeared as effective remedies, in the long run went even more to the imbalance of the biocenosis of insects and useful mites, as well as of the avifauna.
An alternative remedy is the use of predatory mites, capable of curbing their proliferation, such as the Neomolgus capillatus and of working on good agroecology techniques based on appropriate rotations, treating hedges and other tricks that enrich the floristic and faunistic biodiversity.