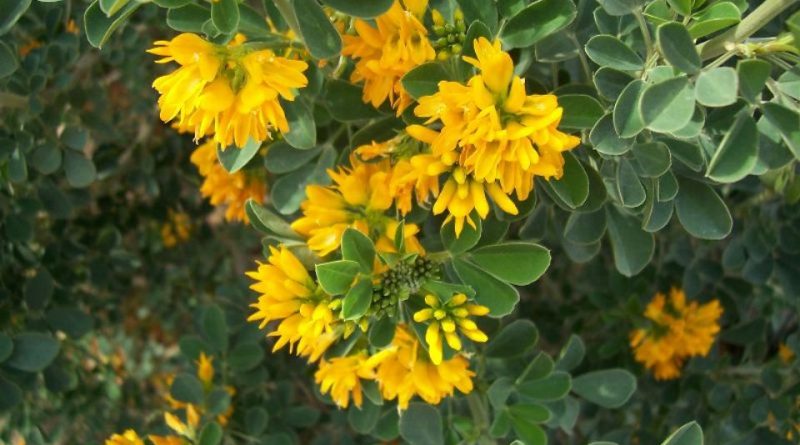 Shrub medick (Medicago arborea L.) is a shrub species of the Fabaceae family.

Etymology –
The term Medicago comes from the Greek medikos, meaning Media, a historic geographical area occupied by Medes who occupied much of today’s central and western Iran south of the Caspian Sea, the territory from which Theophrastus believed the plant came.
The specific arboreal epithet comes from arbor tree: woody, with arboreal habit.

Geographical Distribution and Habitat –
The Medicago arborea is a typical species of the north-eastern Mediterranean areas.
Its habitat is that of areas characterized by heat, even torrid, where it grows well on sandy and also rocky, calcareous and dry soils, from the plain up to 300 m. s.l.m .; it is a species that tolerates the lack of water very well. 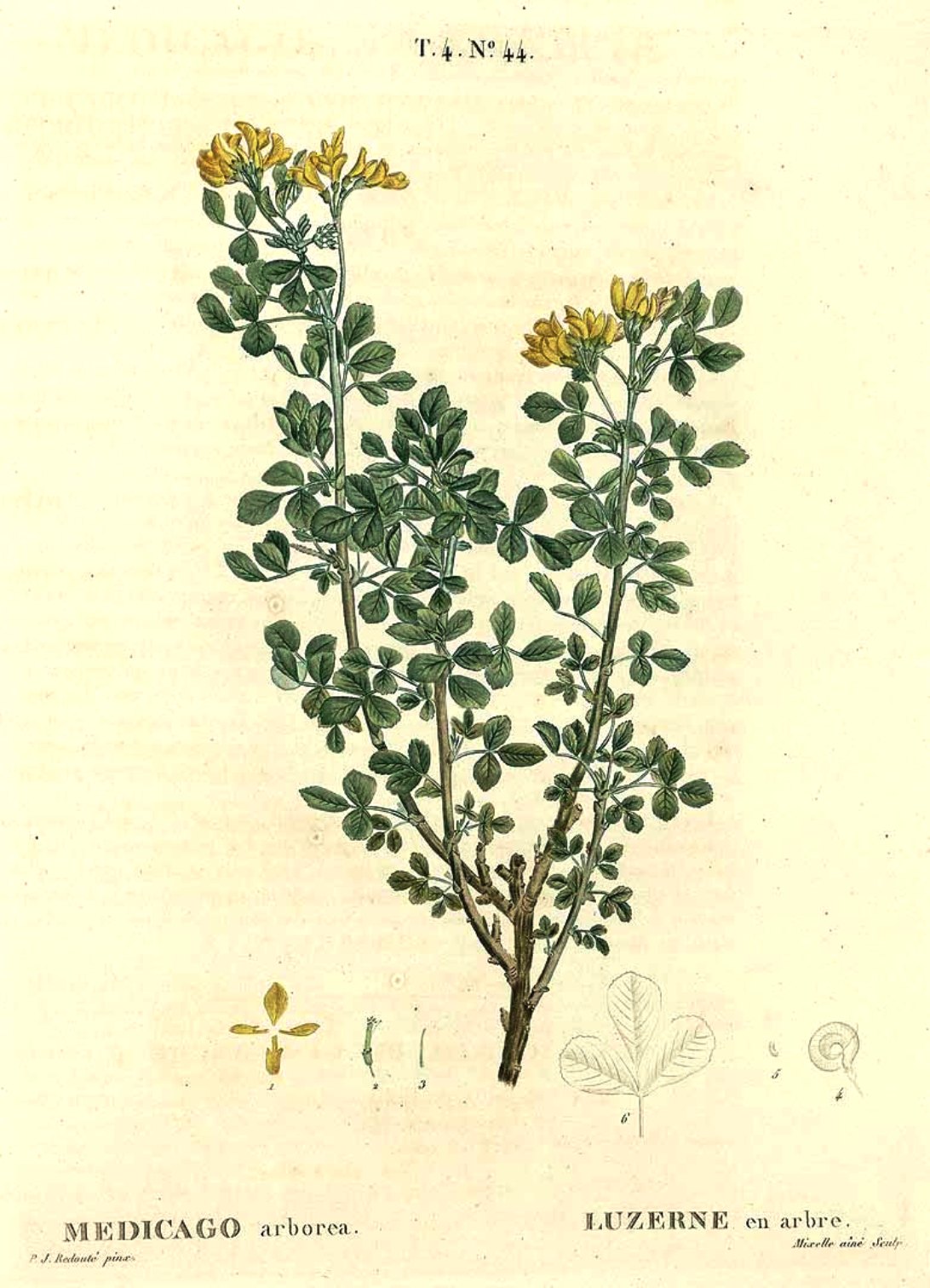 Description –
The shrub medick is a shrub, 1-4 m tall, characterized by woody racemes with whitish bark, longitudinally striped.
The leaves are tomentose-argentinian with whole lanceolate stipules and whole segments, oblanceolate with a maximum width of one sixth from the apex which is rounded or slightly backward.
The racemes are multiflori (5-20 flowers), with a major axis of the leaf petiole.
Flowers with a 5 mm calyx, with teeth less than half the length of the corolla which is 12 mm. The fruits are disk-shaped legumes 10-12 mm in diameter, dark when ripe, with a central circular hole, which contain 4-5 kidney-yellowish-brownish seeds.
The anthesis is between May and June.

Cultivation –
The Medicago arborea is a shrub characterized by the presence, from late autumn, throughout the winter and until late spring, by the presence of numerous flowers with the typical papilionaceous yellow corolla, gathered in inflorescences, which are detached from the axilla of leaves, on the apical parts of the young branches.
For its cultivation it is necessary to plant the plants in a sunny or semi-shaded position, because in full shade a regular growth is guaranteed but with a low production of flowers. While adapting to any type of terrain, sandy, rocky, poor, dry and well-drained soil are preferred. It tolerates drought and saltiness well: it is therefore useful for the construction of coastal gardens. It tolerates cold and frost, even intense and prolonged. After the summer rest, at the autumn vegetative restart, a slight pruning of shearing or removal of dry and damaged parts may be necessary, in order to stimulate the thick development and a subsequent more intense flowering. In the open ground this plant can be used as a single specimen, in association with other Mediterranean essences or even to form unusual hedges and borders that will give color to the garden in months generally without great flowering.

Uses and Traditions –
The shrub medick was already known by the ancient Romans and the Greeks as a good forage plant and is still widely cultivated for this purpose in the Mediterranean basin. As mentioned above it is still used as an ornamental plant.
It is a plant that can play an important role in containing soil erosion phenomena. Spanish researchers have shown that this shrub has the ability to significantly reduce soil erosion caused by water and wind.
One of the other uses is to plant it in orchards and flowerbeds as windbreaks, but its growth is excessively slow. The young stems are quickly lignified. The wood is of extreme hardness and has been used, sometimes, in the handicraft, for its beautiful dark color and its narrow texture, which once polished gives a remarkable shiny aspect.

Preparation Mode –
Of the Medicago arborea you can use the leaves especially in popular cooking cooked or raw in salads and also mixed with other herbs.