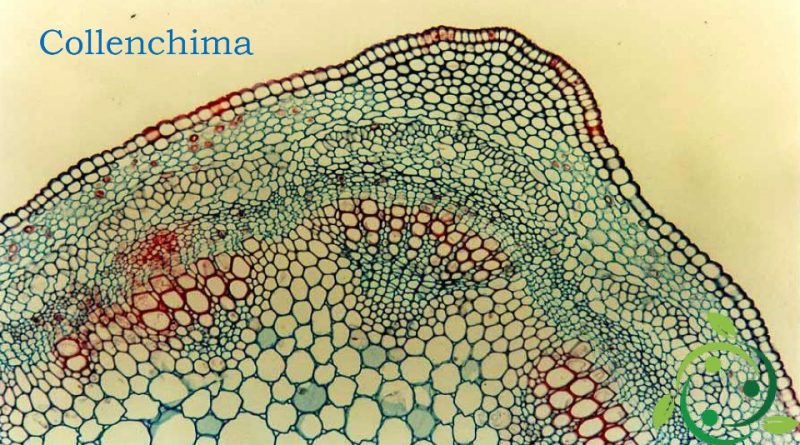 In botany, collenchyma is an adult plant tissue. This fabric, together with the sclerenchyma, is part of the mechanical tissues. Collenchyma is found in higher vascular plants (spermatophytes).
Collenchyma is the supportive tissue typical of the young parts of the stems and leaves that grow by distension, in fact its cells are able to stretch together with the surrounding tissues and to support the organ in which they are located thanks to the thickened cell walls and to the turgor pressure generated inside them. In young stems the collenchyma is in a peripheral position and can form a continuous layer below the epidermis (eg elder) or longitudinal cords forming protruding ribs: this happens for example in the labiate (sage, mint, ..) where the stem has a quadrangular section due to the presence of four protruding cords of collenchyma.
The collenchyma is formed by living cells called collocated, with isodiametric or elongated shape, with walls rich in hemicellulose, cellulose and pectin, which makes them flexible and elastic. This tissue is formed by elongated and living cells, with a large central vacuole that presses the cytoplasm against the cell wall.

The collenchymatic cells are easily recognized in section as they have a primary wall in which thick areas alternate, containing large quantities of pectic substances, and thin zones.
The collenchyma has a limited capacity for support but has the possibility of satisfying, thanks to the possibility of its cells to relax its own wall, the growth of the organ of which it is a part. It has a good metabolic activity (often the collenchymata perform simultaneously more functions, for example, they possess functioning chloroplasts and they perform a good photosynthesis).
A fundamental characteristic of collenchyma cells is linked to the arrangement of the parietal thickenings, which, instead of creating uniformly thick layers, are located at precise points on the wall. On the basis of these provisions, within the collenchima there are three different types:
– angular collenchima, with thickenings that are localized along the edges of the cells;
– lamellar collenchimae, with thickening on the tangential walls of the cells that are arranged in regular rows;
– lacunose collenchima, which, unlike the previous two, has intercellular spaces. The thickenings are near the intercellular spaces.