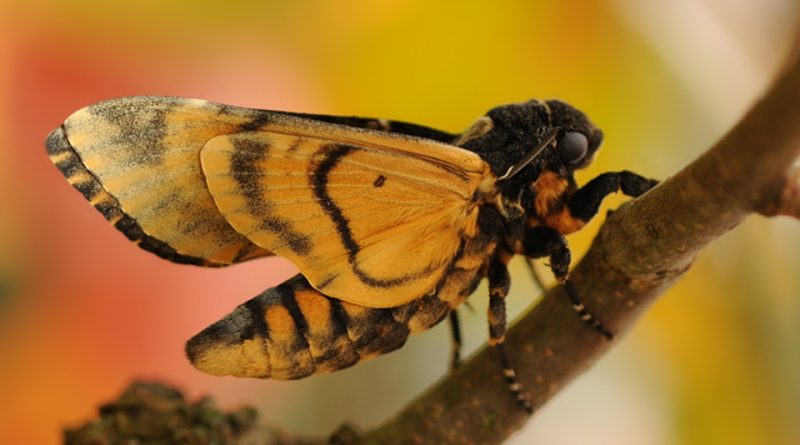 The death’s-head hawkmoth or atropos (Acherontia atropos Linnaeus, 1758) is a moth of the Sphingidae family.

Geographical Distribution and Habitat –
Acherontia atropos is a moth that has a range of diffusion ranging from Africa, Europe and the western parts of the Asian continent.
It is therefore a paleotropical species, present in the Afrotropical and Mediterranean regions. It lives and reproduces in Africa and in the southern part of the Mediterranean basin and in some areas of western Asia. The borders of its area are represented in the eastern border by Kuwait and Saudi Arabia and it goes westward to the Canary Islands and the Azores archipelago.
In the period from May to September, migration to the north takes place, bringing animals to Europe, to southern Scandinavia and to Iceland.
Due to climate change, the northern limit of the range has shifted northward in recent years. This insect has been frequently found in countries of western Eurasia, but only a few individuals manage to winter in these areas successfully.
The habitat of this butterfly is represented by open woods and dry and sunny places where plants belonging to others are to be found, such as Solanaceae (such as belladonna, giusquiamo, tobacco and especially potato), Verbenaceae, Bignoniaceae and with Oleaceae. 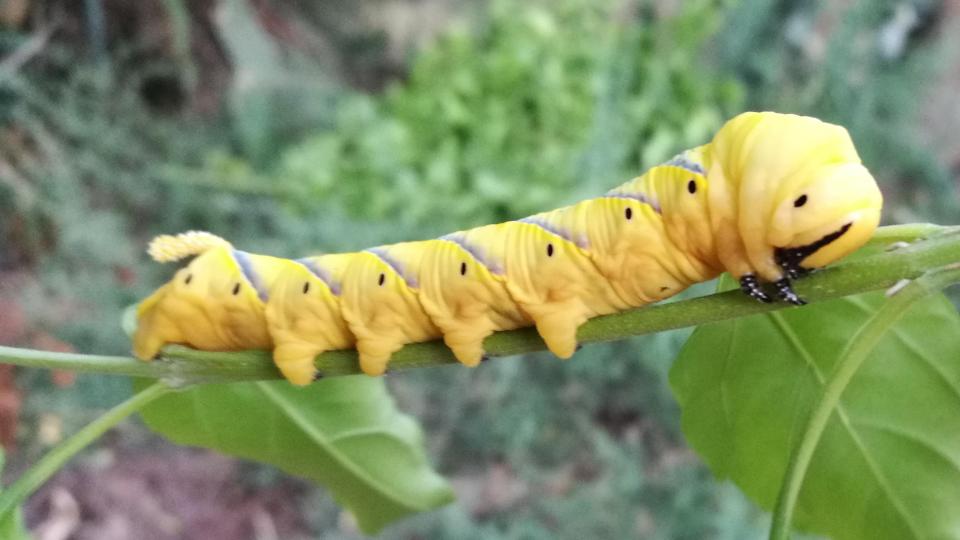 Morphology –
The expression “death’s-head hawkmoth” of this moth to the presence on the dorsal side of the chest of a whitish spot, with two black dots, which resembles the shape of a skull. however, this characteristic stain can sometimes be absent.
This moth is characterized by a massive fusiform body that is covered with thick hair.
The wings have an aerodynamic conformation being placed on the abdomen like the slopes of a roof.
This moth has an average weight of 1.5 g, a body about 6 cm long and a wingspan that can oscillate between 90 and 130 mm.
The antennas are feathery and sturdy, of constant diameter and have hooks at the ends. The upper part of the front wings is brownish, marbled of whitish and blackish, and with a white disc cell. The one of the hind wings instead is yellow with two large dark brown wavy bands.
The abdomen has a yellow color with transversal blackish bands, similar to that of a hornet.
The spiritromba is short, shorter than the chest, sturdy, rigid and covered with hair.
It is also emphasized that the color may vary in intensity and the designs on the wings and on the abdomen may be more or less defined.
The caterpillar has a light green color, which tends to darken as the animal feeds, with diagonal yellow bands on the sides and a black croissant on the eighth abdominal segment, at the end of the tail. At the second stage, numerous small spines appear on the back of the caterpillar. In the third larval stage the yellow diagonal bands develop violet or blue margins and the caudal cornetto from black and smooth becomes yellow and grainy, curved downwards. In the last stage the spines on the back disappear and the larva is long from 13 to 15 cm, has a robust appearance and can take on three different colors: green, brown or yellow.
The chrysalis or pupa is smooth, shiny and mahogany with a reddish tint.
The eggs are green or gray-blue.

Attitude and biological cycle –
The biological cycle of Acherontia atropos can occur in a variable number of generations that can fluctuate between 1 and 3 during the year.
In African populations the brood cycles follow each other continuously, while in the northernmost regions of the range the moth hibernates at the pupal stage, as a chrysalis in the ground.
The eggs are laid singly on the lower page of the leaves of the host plants. At the time of hatching the caterpillar moves little, only in search of fresh leaves to feed on, and snaps the jaws or even gets to bite if it is threatened. This performs 4 molts within about 20 days, during which it grows to a length of 120-130 mm and then digs a hole in the ground and gets caught in a very fragile cocoon, 1.5–4.0 cm long located inside a deep chamber. The moth in its adult form or image emerges from the ground after a complete metamorphosis that can last from 20 to 60 days.
The adult, thanks to its particular conformation and coloring, confuses the profile of the body with the background where it goes to position itself. In daylight hours it rests on tree branches, resting on walls or on the ground, in the litter. The activities of the moth and the flight take place during the night, from sunset to some time after midnight. During this time, adults can be found mating, tail against tail or side by side, which can remain in that position all night or separate after a few hours.
The most appetizing feeding plants are the stramonio, the privet, the potato plant; other plants: olive, jasmine, wild tobacco (Nicotiana glauca), lantana, climbing bignonia, and many others.
The death’s-head hawkmoth head at night attends the hives, in which it feeds on the honey taken by piercing the operculated cells with the short and robust spiritromb. This moth is so fond of honey that in some cases it takes on so much that it cannot leave the hive and end up suffocated by a compact group of bees. In this case, the latter cover its corpse with propolis to prevent the decomposition from causing infection in the hive.

Ecological Role –
The Acherontia atropos, in many parts of its range, is the largest moth and in Europe it is second only to the saturnia of the pear tree.
For its activity in the beehives the damage inflicted on bee colonies is very limited in Europe, since this moth has become very rare, victim of insecticides and light pollution, which interfere with its reproduction and orientation ability, for reasons not yet known, but probably related to the impact on the hormonal system.
In the African continent, on the other hand, where this species is still very widespread and the predation of beehives is a real problem for beekeeping. In addition to honey, the moth feeds on certain floral species, such as jasmine, potato, tobacco, carnation, and sucking the sap from the trees and the juice of rotting fruit. The caterpillars develop instead feeding on the leaves of the host plants suitably chosen by the mothers among about fifty species, at the time of spawning.
In its activity in the beehives this moth is however attacked by bees guarding the entrance of the hive, but its thick hair, the thick cuticle and the resistance to the poison it has developed allow it to access the comb by making off with hops and with the vibratory movement of his wings. When the insect has arrived inside it moves undisturbed because it is able to become chemically invisible to the bees, that is to produce chemical molecules that mimic the skin fatty acids emitted by these Hymenoptera, thus confusing them with them.
It should be emphasized that the Acherontia atropos, unlike the other species of the genus, only attacks the colonies of Apis mellifera.
Among the other features of this moth it is evident that this is the only butterfly in the world capable of producing a cry with the pharynx that is produced by violently expelling the air that vibrates a small foil located at the mouth of the pharynx. In fact, both the caterpillar and the adult, when they are disturbed or feel threatened they emit a sound quite strong, similar to a squeak or the screech of a mouse. This behavior is easy to observe in males who have just reached a light source and who are still in a state of excitement characteristic of these moments. The sound is audible up to about forty meters. This behavior, together with that of raising the wings, of moving the abdomen brightly colored and the secretion of a substance from the nauseating smell through the glandular hairs of the abdomen, has the function of discouraging the attack of predators.