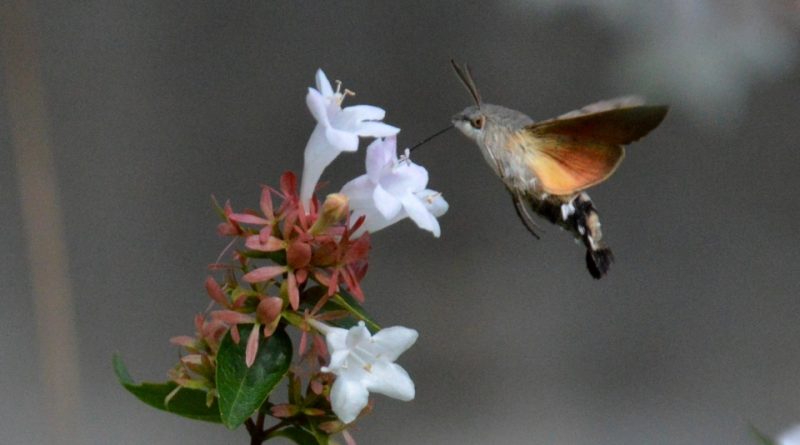 The hummingbird hawk-moth (Macroglossum stellatarum (Linnaeus, 1758)) is a moth of the Sphingidae family.

Geographical Distribution and Habitat –
The hummingbird hawk-moth is a moth widespread in Eurasia and North Africa and precisely in a wide boreal band of the Old World, from Portugal to Japan, but it is sedentary only in the temperate-subtropical areas (Mediterranean basin and eastern regions).
The adult visits flower gardens and can spend the winter inside the houses.

Morphology –
The adult of the Macroglossum stellatarum has brown front wings, crossed by wavy black lines and orange hind wings edged with black. The wingspan is 40–50 mm and can reach a length of 4 to 6 centimeters. The abdomen is rather broad, terminated by a short fan-shaped tail.
Presents a long spiritromba. For the variety of species visited, this butterfly plays an important role in plant fertilization.
The eggs are shiny and pale green, spherical (1 mm in diameter), in imitation of the Galium buds, host plants on which the females lay up to 200, each on a different plant. The eggs are hatched in 6 – 8 days.
The larvae, as soon as they come out, are light yellow; with the following moult they take on the green color with two light stripes on the sides and the back horn typical of the sphingidae. The horn is purple-red, then blue with an orange end in the last suit.
These graze at the top of the plants and rest in the thick of the branches. The larval stage can be as little as 20 days and depends on the warmth of the sun.
The pupae are pale-brown in color with a prominent trunk and two sharp spines at the end of the chrysalis. These are wrapped in silky cocoons placed between the residues of the host plant or among the remains of fallen leaves on the ground.

Attitude and biological cycle –
The hummingbird hawk-moth has at least two spawning eggs every year, with up to four depositions in warmer areas.
Adults are visible at any time of the year, especially in the southern area of ​​the range and overwinter in the interstices of rocks, trees and buildings; in particularly temperate winter days they can emerge to feed.
The larvae of this moth usually graze on galio or robbia, but have also been found on valeriane, stellaria and epilobii.
The adults of this moth are particularly attracted to nectarines with long and thin calyxes, to which they draw by means of the long proboscis (spiritromba) thus avoiding competition with other insects.
Among these plants we remember: Centranthus, Jasminum, Buddleia, Nicotiana, Primula, Viola, Syringa, Verbena, Echium, Phlox, Lavandula, Stachys; moreover these butterflies tend to “cultivate” as they return to the same floral expanses at about the same time of day.

Ecological Role –
Macroglossum stellatarum is a resistant flying moth, capable of large dispersions so that it can be potentially observed anywhere in the northern hemisphere during the summer. However at higher latitudes (for example north of the European Alps and the Russian Caucasus) it rarely survives the winter.
These moths can be easily identified in gardens, parks, meadows, bushes and spots on the edge of the woods, where the plants they feed on grow.
They also have both diurnal and crepuscular habits, they fly in the warm months of the year and settle only to rest after the twilight, well hidden by the vegetation, covering the hindquarters with the front wings and leaving the abdomen exposed.
These moths can also be recognized for their characteristic stationary flight: their wings are in fact animated by an extremely fast movement, very similar to a vibration that allows them to stand close to the flowers and to taste their nectar while remaining in flight, similar to the hummingbirds. The frequency is 70-80 beats per second, just like the small hummingbirds.