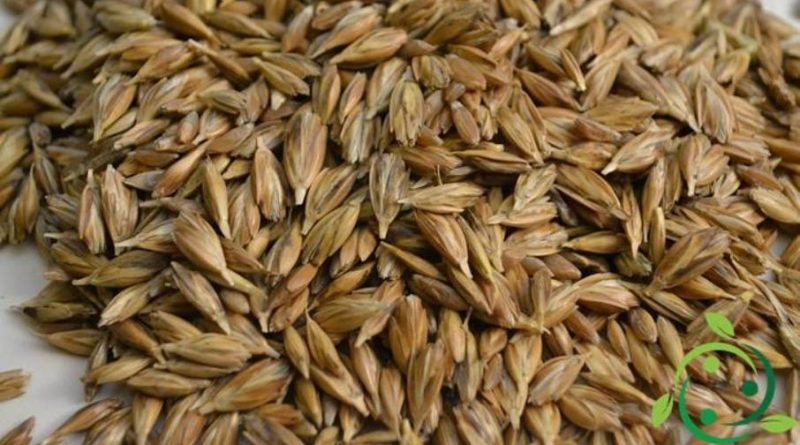 In botany, the term caryopsis refers to the indehiscent, monospermic dry fruit (containing a single seed) characteristic of the Gramineae family, within which only one egg develops.
The caryopsis derives from an ovary, bi-tricarpelle, synchronous
In common parlance the caryopsis is called “grain” or “grain” in the technical-agronomic language.
The caryopsis, according to some authors, is a modification of an achene from which it differs because the seed is welded to the teguments of the fruit (pericarp). In this way the caryopsis, having the pericarp welded to the episperm (seed) is considered a fruit-seed.
From the point of view of composition, the caryopsis is characterized by an abundant floury egg called endosperm, rich in starch, which can constitute up to 90% of the dry weight of the grain. The albumen is in direct contact with the fruit by digestion of the seminal teguments.
The albumen has a amylaceous composition and is surrounded by a more external portion formed by a layer of cells rich in proteins, which is the aleuronic layer, which constitutes about 5% of the dry weight.
The seed also has endosperm rich in starch and also contains proteins, including gluten (absent in rice) and oils.

The remaining part, which is about 5%, consists of the integuments of the fruit and seed (pula) and is the part that is normally eliminated in the production of flour.
From the morphological point of view the fruit can take different forms; these are generally elliptical, with a convex face and a flat one on which there is a depression called ilo. The hilum is in fact the point where the egg’s funiculus attaches to the inner wall of the ovary and can be round, elliptical or linear.
The embryo is in a peripheral position and is generally visible as a relief on the dorsal part of the caryopsis.
In some species, such as in barley or in spelled, the glumes and bracts that cover the spikelet of the Gramineae remain adherent to the caryopsis which, in this case, is called dressed.
Among the best known examples of caryopsis we recall that of wheat, rice and corn.